Triprismatoolithus is known exclusively from Sevenmile Hill, a fossil site at the Two Medicine Formation in Teton County, Montana. It is the oldest known fossil egg site at that formation, dating to 80 million years ago, the early part of the Campanian. [1]

Fossil eggs are common from the upper part of the Two Medicine formation, but it was not until 2010 that paleontologists discovered eggs in the lower part, including Triprismatoolithus. They were discovered by two paleontologists from the University of Montana: Frankie D. Jackson and David J. Varricchio. [1] It remained of uncertain classification (because no similar eggs were known) until 2012 when Agnolin et al. discovered similar eggs associated with Bonapartenykus , which they classified with Triprismatoolithus in a new oofamily, Arriagadoolithidae.

The type specimen of Triprismatoolithus is a complete egg measuring 30 mm by 75 mm, but several other incomplete eggs and eggshell fragments are known. The eggs were paired, similar to Continuoolithus . The eggshell is between ranges from 525 to 850 μm thick. [1]

Triprismatoolithus is notable for having three structural layers, [1] similar to birds and unlike most other non-avian dinosaur eggs. [3] The second layer, known as the prismatic layer, is made up of closely packed calcite crystals, and exhibits irregular squamatic texture. [1] [2] It is five times thicker than the mammillary layer. [1]

The surface of the eggshell of Triprismatoolithus is covered with low, rounded tubercles, similar to Arriagadoolithus . [1] [2]

Triprismatoolithus has not been found associated with embryos or adult remains, so it is unknown precisely what kind of dinosaur laid the eggs. However, the closely related oogenus, Arriagadoolithus, was discovered closely associated with the alvarezsaurid Bonapartenykus, so it is likely that T. stephensi was also laid by an unknown alvarezaur or a closely related dinosaur. [2]

Arriagadoolithids, like elongatoolithids, prismatoolithids, and Continuoolithus , [1] are laid in pairs, which is interpreted as evidence that oviraptorosaurs, troodontids, and alvarezsaurs had two functioning oviducts, unlike birds which have only one. [2] 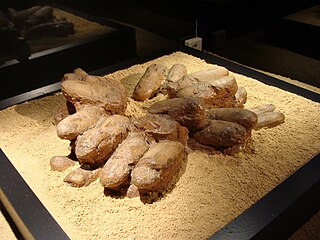 Elongatoolithus is an oogenus of dinosaur eggs found in the Late Cretaceous formations of China and Mongolia. Like other elongatoolithids, they were laid by small theropods, and were cared for and incubated by their parents until hatching. They are often found in nests arranged in multiple layers of concentric rings. As its name suggests, Elongatoolithus was a highly elongated form of egg. It is historically significant for being among the first fossil eggs given a parataxonomic name.

Dictyoolithus is an oogenus of dinosaur egg from the Cretaceous of China. It is notable for having over five superimposed layers of eggshell units. Possibly, it was laid by megalosauroid dinosaurs.

Macroelongatoolithus is an oogenus of large, fossil theropod eggs. They are known from Asia and from North America.

Macroolithus is an oogenus of dinosaur egg belonging to the oofamily Elongatoolithidae. The type oospecies, M. rugustus, was originally described under the now-defunct oogenus name Oolithes. Three other oospecies are known: M. yaotunensis, M. mutabilis, and M. lashuyuanensis. They are relatively large, elongated eggs with a two-layered eggshell. Their nests consist of large, concentric rings of paired eggs. There is evidence of blue-green pigmentation in its shell, which may have helped camouflage the nests.

Phaceloolithus is an oogenus of dinosaur egg found in the Fenshui'ao Formation of the Dongting Basin of the Hunan Province of China. The eggs have a subspherical shape, measuring up to 168 mm on the long axis, and having a very thin shell.

Continuoolithus is an oogenus of dinosaur egg found in the late Cretaceous of North America. It is most commonly known from the late Campanian of Alberta and Montana, but specimens have also been found dating to the older Santonian and the younger Maastrichtian. It was laid by an unknown type of theropod. These small eggs are similar to the eggs of oviraptorid dinosaurs, but have a distinctive type of ornamentation.

Ageroolithus is an oogenus of dinosaur egg. It may have been laid by a theropod.

Egg fossils are the fossilized remains of eggs laid by ancient animals. As evidence of the physiological processes of an animal, egg fossils are considered a type of trace fossil. Under rare circumstances a fossil egg may preserve the remains of the once-developing embryo inside, in which case it also contains body fossils. A wide variety of different animal groups laid eggs that are now preserved in the fossil record beginning in the Paleozoic. Examples include invertebrates like ammonoids as well as vertebrates like fishes, possible amphibians, and reptiles. The latter group includes the many dinosaur eggs that have been recovered from Mesozoic strata. Since the organism responsible for laying any given egg fossil is frequently unknown, scientists classify eggs using a parallel system of taxonomy separate from but modeled after the Linnaean system. This "parataxonomy" is called veterovata.

Montanoolithus is an oogenus of fossil egg found in Montana and Alberta. They were probably laid by a dromaeosaur or a caenagnathid.

Microolithus is an oogenus of fossil bird egg from Wyoming, with preserved embryonic remains inside some of its specimens.

Elongatoolithidae is an oofamily of fossil eggs, representing the eggs of oviraptorosaurs. They are known for their highly elongated shape. Elongatoolithids have been found in Europe, Asia, and both North and South America.

Mycomorphoolithus is an oogenus of fossil eggs found in Spain and England. They possibly represent eggshells of non-eusuchian crocodylomorphs, and are similar to, but not part of, the Krokolithidae.

Dictyoolithidae is an oofamily of dinosaur eggs which have a distinctive reticulate organization of their eggshell units. They are so far known only from Cretaceous formations in China.

Tubercuoolithus is an oogenus of dinosaur egg from the early Campanian of Montana.

Nipponoolithus is an oogenus of fossil egg native to Japan. It is one of the smallest known dinosaur eggs, and was probably laid by some kind of non-avian maniraptor.

Gobioolithus is an oogenus of fossil bird egg native to Mongolia. They are small, smooth-shelled, and elongated eggs that were first discovered in the 1960s and early 70s during a series of fossil-hunting expeditions in the Gobi desert. Two oospecies have been described: Gobioolithus minor and G. major. The eggs were probably laid in colonial nesting sites on the banks of rivers and lakes.

Pachycorioolithus is an oogenus of small, thin-shelled fossil egg from the early Cretaceous in China. It probably belongs to a bird, though there is a possibility the parent was a non-avian theropod. It was named in 2016, based on a single specimen found in Zhejiang.

Arriagadoolithus is the oogenus of fossil eggs which includes the eggs of the alvarezsaurid Bonapartenykus. Fossils of the creature were found in Patagonia; it may have brooded on its eggs.

Nanhsiungoolithus is an oogenus of dinosaur egg from the late Cretaceous of China. It belongs to the oofamily Elongatoolithidae, which means that it was probably laid by an oviraptorosaur, though so far no skeletal remains have been discovered in association with Nanhsiungoolithus. The oogenus contains only a single described oospecies, N. chuetienensis. It is fairly rare, only being know from two partially preserved nests and a few eggshell fragments.