New South Wales is a state on the east coast of Australia. It borders Queensland to the north, Victoria to the south, and South Australia to the west. Its coast borders the Coral and Tasman Seas to the east. The Australian Capital Territory is an enclave within the state. New South Wales' state capital is Sydney, which is also Australia's most populous city. In March 2019, the population of New South Wales was over 8 million, making it Australia's most populous state. Just under two-thirds of the state's population, 5.1 million, live in the Greater Sydney area. The demonym for inhabitants of New South Wales is New South Welshmen; but some have protested this term while there is no commonly accepted alternative.

Perth is the capital and largest city of the Australian state of Western Australia (WA). It is Australia's fourth-most populous city, with a population of 2.14 million living in Greater Perth. Perth is part of the South West Land Division of Western Australia, with most of the metropolitan area on the Swan Coastal Plain between the Indian Ocean and the Darling Scarp. The city has expanded outward from the original settlements on the Swan River, upon which the city's central business district and port of Fremantle are situated. 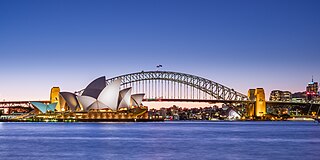 Sydney is the capital city of the state of New South Wales, and the most populous city in Oceania. Located on Australia's east coast, the metropolis surrounds Port Jackson and extends about 70 km (43.5 mi) on its periphery towards the Blue Mountains to the west, Hawkesbury to the north, the Royal National Park to the south and Macarthur to the south-west. Sydney is made up of 658 suburbs, spread across 33 local government areas. Informally there are at least 15 regions. Residents of the city are known as "Sydneysiders". As of June 2019, Sydney's estimated metropolitan population was 5,312,163, meaning the city is home to approximately 65% of the state's population.

Tasmania is an island state of Australia. It is located 240 km (150 mi) to the south of the Australian mainland, separated by Bass Strait. The state encompasses the main island of Tasmania, the 26th-largest island in the world, and the surrounding 334 islands. The state has a population of about 540,000 people as of March 2020. The state capital and largest city is Hobart, with around 40 percent of the population living in the Greater Hobart area.

Western Australia is a state occupying the western 32.9 percent of the land area of Australia excluding external territories. It is bounded by the Indian Ocean to the north and west, and the Southern Ocean to the south, the Northern Territory to the north-east, and South Australia to the south-east. Western Australia is Australia's largest state, with a total land area of 2,527,013 square kilometres (975,685 sq mi), and the second-largest country subdivision in the world, surpassed only by Russia's Sakha Republic. As of 2017, the state has about 2.6 million inhabitants – around 11 percent of the national total – of whom the vast majority live in the south-west corner, 79 percent of the population living in the Perth area, leaving the remainder of the state sparsely populated.

Queensland ( KWEENZ-land,is a state situated in northeastern Australia, and is the second-largest and third-most populous Australian state. It is a federated state and a parliamentary constitutional monarchy, and is bordered by the Northern Territory, South Australia and New South Wales to the west, south-west and south respectively. To the east, Queensland is bordered by the Coral Sea and Pacific Ocean. To its north is the Torres Strait, separating the Australian mainland from Papua New Guinea. With an area of 1,852,642 square kilometres, Queensland is the world's sixth-largest sub-national entity, and is larger than all but 15 countries. Due to its size, Queensland's geographical features and climates are diverse, including tropical rainforests, rivers, coral reefs, mountain ranges and sandy beaches in its tropical and sub-tropical coastal regions, as well as deserts and savanna in the semi-arid and desert climactic regions of its interior. 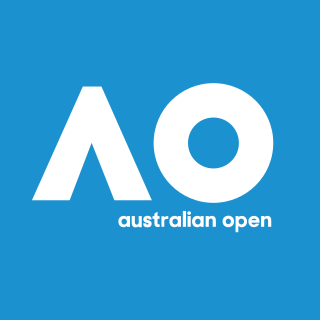 The Australian Open is a tennis tournament held annually over the last fortnight of January at Melbourne Park in Melbourne, Australia. The tournament is the first of the four Grand Slam tennis events held each year, preceding the French Open, Wimbledon, and the US Open. It features men's and women's singles; men's, women's, and mixed doubles; junior's championships; and wheelchair, legends, and exhibition events. Prior to 1988, it was played on grass courts, but since then three types of hardcourt surfaces have been used: green-coloured Rebound Ace up to 2007, blue Plexicushion from 2008 to 2019, and blue GreenSet since 2020. 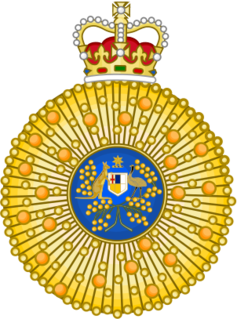 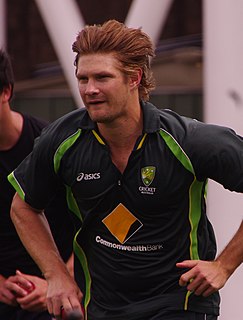 Shane Robert Watson is an Australian former cricketer, and occasional captain in all formats, who has played for Australia's national cricket team. He is a right-handed batsman and a right-handed fast-medium swing bowler who played international cricket between 2002 and 2016 as world No. 1 T20I all-rounder. He was the last player to retire from Australia's golden era of the early 2000s. 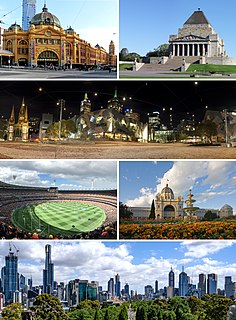 Melbourne is the capital and most-populous city of the Australian state of Victoria, and the second-most populous city in Australia and Oceania. Its name refers to an urban agglomeration of 9,993 km2 (3,858 sq mi), comprising a metropolitan area with 31 municipalities, and is also a common name for its city centre. The city occupies much of the coastline of Port Phillip bay and spreads into the Hinterland towards the Dandenong and Macedon ranges, Mornington Peninsula and Yarra Valley. It has a population of 5 million, and its inhabitants are referred to as "Melburnians". 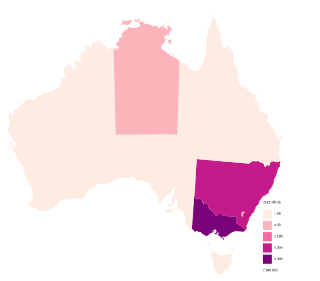 The COVID-19 pandemic in Australia is part of the ongoing worldwide pandemic of the coronavirus disease 2019 caused by severe acute respiratory syndrome coronavirus 2. The first confirmed case in Australia was identified on 25 January 2020, in Victoria, when a man who had returned from Wuhan, China, tested positive for the virus.