In mathematics, the adjective trivial is often used to refer to a claim or a case which can be readily obtained from context, or an object which possesses a simple structure (e.g., groups, topological spaces). [1] [2] The noun triviality usually refers to a simple technical aspect of some proof or definition. The origin of the term in mathematical language comes from the medieval trivium curriculum, which distinguishes from the more difficult quadrivium curriculum. [1] [3] The opposite of trivial is nontrivial, which is commonly used to indicate that an example or a solution is not simple, or that a statement or a theorem is not easy to prove. [2]

In mathematics, the term "trivial" is often used to refer to objects (e.g., groups, topological spaces) with a very simple structure. These include, among others

"Trivial" can also be used to describe solutions to an equation that have a very simple structure, but for the sake of completeness cannot be omitted. These solutions are called the trivial solutions. For example, consider the differential equation

is a function whose derivative is

. The trivial solution is the zero function

while a nontrivial solution is the exponential function

is important in math and physics, as it could be used to describe a particle in a box in quantum mechanics, or a standing wave on a string. It always includes the solution

Similarly, mathematicians often describe Fermat's Last Theorem as asserting that there are no nontrivial integer solutions to the equation

, where n is greater than 2. Clearly, there are some solutions to the equation. For example,

is a solution for any n, but such solutions are obvious and obtainable with little effort, and hence "trivial".

Trivial may also refer to any easy case of a proof, which for the sake of completeness cannot be ignored. For instance, proofs by mathematical induction have two parts: the "base case" which shows that the theorem is true for a particular initial value (such as n = 0 or n = 1), and the inductive step which shows that if the theorem is true for a certain value of n, then it is also true for the value n + 1. The base case is often trivial and is identified as such, although there are situations where the base case is difficult but the inductive step is trivial. Similarly, one might want to prove that some property is possessed by all the members of a certain set. The main part of the proof will consider the case of a nonempty set, and examine the members in detail; in the case where the set is empty, the property is trivially possessed by all the members, since there are none (see vacuous truth for more).

A common joke in the mathematical community is to say that "trivial" is synonymous with "proved"—that is, any theorem can be considered "trivial" once it is known to be true. [1]

However, to someone with no knowledge of integral calculus, this is not obvious at all.

Triviality also depends on context. A proof in functional analysis would probably, given a number, trivially assume the existence of a larger number. However, when proving basic results about the natural numbers in elementary number theory, the proof may very well hinge on the remark that any natural number has a successor—a statement which should itself be proved or be taken as an axiom (for more, see Peano's axioms).

In mathematics, the Abel–Ruffini theorem states that there is no solution in radicals to general polynomial equations of degree five or higher with arbitrary coefficients. Here, general means that the coefficients of the equation are viewed and manipulated as indeterminates. 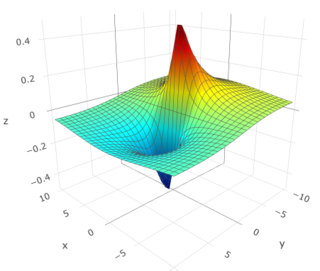 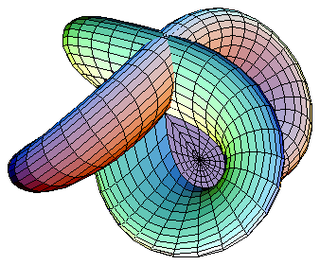 Farkas' lemma is a solvability theorem for a finite system of linear inequalities in mathematics. It was originally proven by the Hungarian mathematician Gyula Farkas. Farkas' lemma is the key result underpinning the linear programming duality and has played a central role in the development of mathematical optimization. It is used amongst other things in the proof of the Karush–Kuhn–Tucker theorem in nonlinear programming. Remarkably, in the area of the foundations of quantum theory, the lemma also underlies the complete set of Bell inequalities in the form of necessary and sufficient conditions for the existence of a local hidden-variable theory, given data from any specific set of measurements.

In linear algebra, eigendecomposition is the factorization of a matrix into a canonical form, whereby the matrix is represented in terms of its eigenvalues and eigenvectors. Only diagonalizable matrices can be factorized in this way. When the matrix being factorized is a normal or real symmetric matrix, the decomposition is called "spectral decomposition", derived from the spectral theorem. 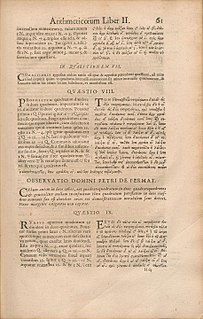 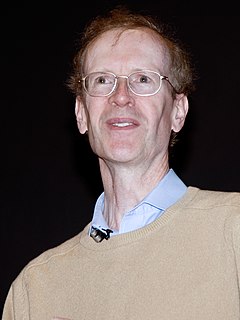 In mathematics, the Pythagorean theorem, or Pythagoras' theorem, is a fundamental relation in Euclidean geometry among the three sides of a right triangle. It states that the area of the square whose side is the hypotenuse is equal to the sum of the areas of the squares on the other two sides. This theorem can be written as an equation relating the lengths of the sides a, b and c, often called the Pythagorean equation:

The Millennium Prize Problems are seven unsolved problems in mathematics that were stated by the Clay Mathematics Institute on May 24, 2000. The problems are the Birch and Swinnerton-Dyer conjecture, Hodge conjecture, Navier–Stokes existence and smoothness, P versus NP problem, Poincaré conjecture, Riemann hypothesis, and Yang–Mills existence and mass gap. A correct solution to any of the problems results in a US$1 million prize being awarded by the institute to the discoverer(s).

In algebraic geometry, the main theorem of elimination theory states that every projective scheme is proper. A version of this theorem predates the existence of scheme theory. It can be stated, proved, and applied in the following more classical setting. Let k be a field, denote by the n-dimensional projective space over k. The main theorem of elimination theory is the statement that for any n and any algebraic variety V defined over k, the projection map sends Zariski-closed subsets to Zariski-closed subsets.