Trivialism is the logical theory that all statements (also known as propositions) are true and that all contradictions of the form "p and not p" (e.g. the ball is red and not red) are true. In accordance with this, a trivialist is a person who believes everything is true. [1] [2]

In classical logic, trivialism is in direct violation of Aristotle's law of noncontradiction. In philosophy, trivialism is considered by some to be the complete opposite of skepticism. Paraconsistent logics may use "the law of non-triviality" to abstain from trivialism in logical practices that involve true contradictions.

Theoretical arguments and anecdotes have been offered for trivialism to contrast it with theories such as modal realism, dialetheism and paraconsistent logics.

Trivialism, as a term, is derived from the Latin word trivialis, meaning something that can be found everywhere. From this, "trivial" was used to suggest something was introductory or simple. In logic, from this meaning, a "trivial" theory is something regarded as defective in the face of a complex phenomenon that needs to be completely represented. Thus, literally, the trivialist theory is something expressed in the simplest possible way. [3]

In symbolic logic, trivialism may be expressed as the following: [4]

The above would be read as "given any proposition, it is a true proposition" through universal quantification (∀).

A claim of trivialism may always apply its fundamental truth, otherwise known as a truth predicate:

The above would be read as a "proposition if and only if a true proposition", meaning that all propositions are believed to be inherently proven as true. Without consistent use of this concept, a claim of advocating trivialism may not be seen as genuine and complete trivialism; as to claim a proposition is true but deny it as probably true may be considered inconsistent with the assumed theory. [4]

Luis Estrada-González in "Models of Possibilism and Trivialism" lists four types of trivialism through the concept of possible worlds, with a "world" being a possibility and "the actual world" being reality. It is theorized a trivialist simply designates a value to all propositions in equivalence to seeing all propositions and their negations as true. This taxonomy is used to demonstrate the different strengths and plausibility of trivialism in this context:

The consensus among the majority of philosophers is descriptively a denial of trivialism, termed as non-trivialism or anti-trivialism. [3] This is due to it being unable to produce a sound argument through the principle of explosion and it being considered an absurdity (reductio ad absurdum). [2] [4]

Aristotle's law of noncontradiction and other arguments are considered to be against trivialism. Luis Estrada-González in "Models of Possiblism and Trivialism" has interpreted Aristotle's Metaphysics Book IV as such: "A family of arguments between 1008a26 and 1007b12 of the form 'If trivialism is right, then X is the case, but if X is the case then all things are one. But it is impossible that all things are one, so trivialism is impossible.' ... these Aristotelian considerations are the seeds of virtually all subsequent suspicions against trivialism: Trivialism has to be rejected because it identifies what should not be identified, and is undesirable from a logical point of view because it identifies what is not identical, namely, truth and falsehood." [3]

Graham Priest considers trivialism untenable: "a substantial case can be made for [dialetheism]; belief in [trivialism], though, would appear to be grounds for certifiable insanity". [5]

He formulated the "law of non-triviality" as a replacement for the law of non-contradiction in paraconsistent logic and dialetheism. [6]

There are theoretical arguments for trivialism argued from the position of a devil's advocate:

Paul Kabay has argued for trivialism in "On the Plenitude of Truth" from the following:

Above, possibilism (modal realism; related to possible worlds) is the oft-debated theory that every proposition is possible. With this assumed to be true, trivialism can be assumed to be true as well according to Kabay.

The liar's paradox, Curry's paradox, and the principle of explosion all can be asserted as valid and not required to be resolved and used to defend trivialism. [2] [4]

In Paul Kabay's comparison of trivialism to schools of philosophical skepticism (in "On the Plenitude of Truth")—such as Pyrrhonism—who seek to attain a form of ataraxia, or state of imperturbability; it is purported the figurative trivialist inherently attains this state. This is claimed to be justified by the figurative trivialist seeing every state of affairs being true, even in a state of anxiety. Once universally accepted as true, the trivialist is free from any further anxieties regarding whether any state of affairs is true.

Kabay compares the Pyrrhonian skeptic to the figurative trivialist and claims that as the skeptic reportedly attains a state of imperturbability through a suspension of belief, the trivialist may attain such a state through an abundance of belief.

In this case—and according to independent claims by Graham Priest—trivialism is considered the complete opposite of skepticism. [2] [4] [7] However, insofar as the trivialist affirms all states of affairs as universally true, the Pyrrhonist neither affirms nor denies the truth (or falsity) of such affairs. [8]

It is asserted by both Priest and Kabay that it is impossible for a trivialist to truly choose and thus act. [6] [9] Priest argues this by the following in Doubt Truth to Be a Liar: "One cannot intend to act in such a way as to bring about some state of affairs, s, if one believes s already to hold. Conversely, if one acts with the purpose of bringing s about, one cannot believe that s already obtains." Due to their suspension of determination upon striking equipollence between claims, the Pyrrhonist has also remained subject to apraxia charges. [10] [11] [12]

Paul Kabay, an Australian philosopher, in his book A Defense of Trivialism has argued that various philosophers in history have held views resembling trivialism, although he stops short of calling them trivialists. He mentions various pre-Socratic Greek philosophers as philosophers holding views resembling trivialism. He mentions that Aristotle in his book Metaphysics appears to suggest that Heraclitus and Anaxagoras advocated trivialism. He quotes Anaxagoras as saying that all things are one. Kabay also suggests Heraclitus' ideas are similar to trivialism because Heraclitus believed in a union of opposites, shown in such quotes as "the way up and down is the same". [4] : 32–35  Kabay also mentions a fifteenth century Roman Catholic cardinal, Nicholas of Cusa, stating that what Cusa wrote in De Docta Ignorantia is interpreted as stating that God contained every fact, which Kabay argues would result in trivialism, but Kabay admits that mainstream Cusa scholars would not agree with interpreting Cusa as a trivialist. [4] : 36–37  Kabay also mentions Spinoza as a philosopher whose views resemble trivialism. Kabay argues Spinoza was a trivialist because Spinoza believed everything was made of one substance which had infinite attributes. [4] : 37–40  Kabay also mentions Hegel as a philosopher whose views resemble trivialism, quoting Hegel as stating in The Science of Logic "everything is inherently contradictory." [4] : 40–41

The Greek philosopher Anaxagoras is suggested as a possible trivialist by Graham Priest in his 2005 book Doubt Truth to Be a Liar. Priest writes, "He held that, at least at one time, everything was all mixed up so that no predicate applied to any one thing more than a contrary predicate." [6]

In logic, the law of excluded middle states that for every proposition, either this proposition or its negation is true. It is one of the so called three laws of thought, along with the law of noncontradiction, and the law of identity. However, no system of logic is built on just these laws, and none of these laws provides inference rules, such as modus ponens or De Morgan's laws.

In philosophy and logic, the classical liar paradox or liar's paradox or antinomy of the liar is the statement of a liar that they are lying: for instance, declaring that "I am lying". If the liar is indeed lying, then the liar is telling the truth, which means the liar just lied. In "this sentence is a lie" the paradox is strengthened in order to make it amenable to more rigorous logical analysis. It is still generally called the "liar paradox" although abstraction is made precisely from the liar making the statement. Trying to assign to this statement, the strengthened liar, a classical binary truth value leads to a contradiction.

A paradox is a logically self-contradictory statement or a statement that runs contrary to one's expectation. It is a statement that, despite apparently valid reasoning from true premises, leads to a seemingly self-contradictory or a logically unacceptable conclusion. A paradox usually involves contradictory-yet-interrelated elements that exist simultaneously and persist over time. They result in "persistent contradiction between interdependent elements" leading to a lasting "unity of opposites".

In logic, false or untrue is the state of possessing negative truth value or a nullary logical connective. In a truth-functional system of propositional logic, it is one of two postulated truth values, along with its negation, truth. Usual notations of the false are 0, O, and the up tack symbol .

Pluralism is a term used in philosophy, meaning "doctrine of multiplicity," often used in opposition to monism and dualism. The term has different meanings in metaphysics, ontology, epistemology and logic.

In logic, a three-valued logic is any of several many-valued logic systems in which there are three truth values indicating true, false and some indeterminate third value. This is contrasted with the more commonly known bivalent logics which provide only for true and false.

Dialetheism is the view that there are statements which are both true and false. More precisely, it is the belief that there can be a true statement whose negation is also true. Such statements are called "true contradictions", dialetheia, or nondualisms. 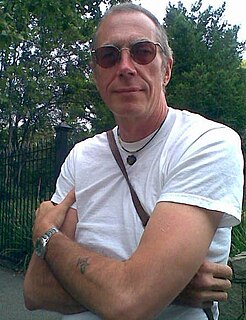 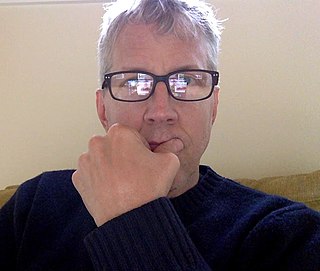 The following is a list of works by philosopher Graham Priest.