Russian cosmism is a philosophical and cultural movement that emerged in Russia in the turn of the 19th and 20th centuries.

Cosmism entailed a broad theory of natural philosophy, combining elements of religion and ethics with a history and philosophy of the origin, evolution, and future existence of the cosmos and humankind. It combined elements from both Eastern and Western philosophic traditions as well as from the Russian Orthodox Church.[ citation needed ]

Cosmism was one of the influences on Proletkult, and after the October Revolution, the term came to be applied to "...the poetry of such writers as Mikhail Gerasimov and Vladimir Kirillov...: emotional paeans to physical labor, machines, and the collective of industrial workers ... organized around the image of the universal 'Proletarian', who strides forth from the earth to conquer planets and stars." [1] This form of cosmism, along with the writings of Nikolai Fyodorov, was a strong influence on Andrei Platonov.[ citation needed ]

Many ideas of the Russian cosmists were later developed by those in the transhumanist movement. [2] Victor Skumin argues that the Culture of Health will play an important role in the creation of a human spiritual society into the Solar System. [3] [4] [5]

The Culture of Health is the basic science about Spiritual Humanity. It studies the perspectives of harmonious development of "Spiritual man" and "Spiritual ethnos" as a conscious creator of the State of Light into the territory of the Solar System" (by Skumin).

Among the major representatives of Russian cosmism was Nikolai Fyodorovich Fyodorov (1828–1903), an advocate of radical life extension by means of scientific methods, human immortality, and resurrection of dead people. [6]

In 1881, Russian revolutionary and rocket pioneer Nikolai Kibalchich proposed an idea of pulsed rocket propulsion by combustion of explosives, which was an early precursor for Project Orion.[ citation needed ]

Konstantin Tsiolkovsky (1857–1935) was among the pioneers of theoretical space exploration and cosmonautics. In 1903, he published Изслѣдованіе міровыхъ пространствъ реактивными приборами (The Exploration of Cosmic Space by Means of Reactive Devices [Rockets]), the first serious scientific work on space travel. Tsiolkovsky believed that colonizing space would lead to the perfection of the human race, with immortality and a carefree existence. He also developed ideas of the "animated atom" (panpsychism), as well as "radiant mankind".[ citation needed ]

Konstantin Eduardovich Tsiolkovsky was a Russian and Soviet of Polish descent rocket scientist and pioneer of the astronautic theory. Along with the French Robert Esnault-Pelterie, the German Hermann Oberth and the American Robert H. Goddard, he is considered to be one of the founding fathers of modern rocketry and astronautics. His works later inspired leading Soviet rocket engineers such as Sergei Korolev and Valentin Glushko and contributed to the success of the Soviet space program.

Nicholas Roerich – known also as Nikolai Konstantinovich Rerikh – was a Russian painter, writer, archaeologist, theosophist, philosopher, and public figure, who in his youth was influenced by a movement in Russian society around the spiritual. He was interested in hypnosis and other spiritual practices and his paintings are said to have hypnotic expression.

Nikolai Alexandrovich Berdyaev was a Russian political and also Christian religious philosopher who emphasized the existential spiritual significance of human freedom and the human person. Alternate historical spellings of his name in English include "Berdiaev" and "Berdiaeff", and of his given name as "Nicolas" and "Nicholas". 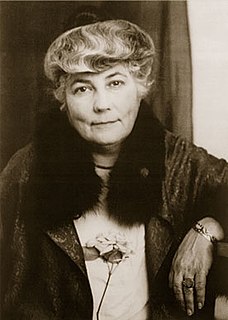 Helena Ivanovna Roerich was a Russian theosophist, writer, and public figure. In the early 20th century, she created, in cooperation with the Teachers of the East, a philosophic teaching of Living Ethics. She was an organizer and participant of cultural activity in the U.S., conducted under the guidance of her husband, Nicholas Roerich. Along with her husband, she took part in expeditions of hard-to-reach and little-investigated regions of Central Asia. She was an Honorary President-Founder of the Institute of Himalayan Studies "Urusvati" in India and co-author of the idea of the International Treaty for Protection of Artistic and Scientific Institutions and Historical Monuments. She translated two volumes of the Secret Doctrine of H. P. Blavatsky, and also selected Mahatma's Letters, from English to Russian.

Nikolai Fyodorovich Fyodorov was a Russian Orthodox Christian philosopher, who was part of the Russian cosmism movement and a precursor of transhumanism. Fyodorov advocated radical life extension, physical immortality and even resurrection of the dead, using scientific methods.

Michael Hagemeister is a German historian and Slavist, an authority on The Protocols of the Elders of Zion and on Sergei Nilus.

The Monument to the Conquerors of Space was erected in Moscow in 1964 to celebrate achievements of the Soviet people in space exploration. It depicts a starting rocket that rises on its exhaust plume. The monument is 107 meters tall, has 77° incline, and is made of titanium. The Memorial Museum of Cosmonautics is located inside the base of the monument. 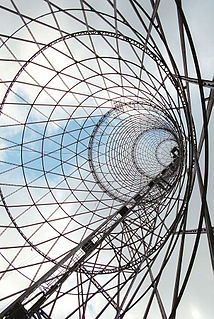 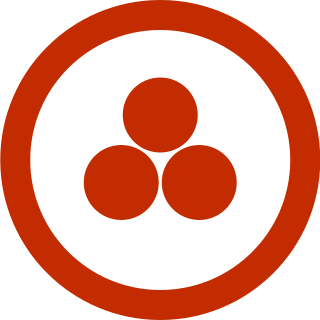 Roerichism or Rerikhism is a spiritual, cultural and social movement that emerged in the United States in the first half of the twentieth century, though it has been described as a "thoroughly Russian new religious movement", due to its close connection with Russia.

Victor Andreevich Skumin is a Russian and Soviet scientist, psychiatrist, philosopher and writer.

Yoga in Russia is the practice of yoga, including modern yoga as exercise, in Russia. The actor Constantin Stanislavski made extensive use of Hatha Yoga in his system for training actors in the 1910s.