Scientific realism is the view that the universe described by science is real regardless of how it may be interpreted.[ clarification needed ]

Within philosophy of science, this view is often an answer to the question "how is the success of science to be explained?" The discussion on the success of science in this context centers primarily on the status of unobservable entities apparently talked about by scientific theories. Generally, those who are scientific realists assert that one can make valid claims about unobservables (viz., that they have the same ontological status) as observables, as opposed to instrumentalism.

Scientific realism involves two basic positions. First, it is a set of claims about the features of an ideal scientific theory; an ideal theory is the sort of theory science aims to produce. Second, it is the commitment that science will eventually produce theories very much like an ideal theory and that science has done pretty well thus far in some domains. It is important to note that one might be a scientific realist regarding some sciences while not being a realist regarding others.[ citation needed ]

According to scientific realism, an ideal scientific theory has the following features:

Combining the first and the second claim entails that an ideal scientific theory says definite things about genuinely existing entities. The third claim says that we have reasons to believe that many scientific claims about these entities are true, but not all.

Scientific realism is related to much older philosophical positions including rationalism and metaphysical realism. However, it is a thesis about science developed in the twentieth century. Portraying scientific realism in terms of its ancient, medieval, and early modern cousins is at best misleading.

Scientific realism is developed largely as a reaction to logical positivism. Logical positivism was the first philosophy of science in the twentieth century and the forerunner of scientific realism, holding that a sharp distinction can be drawn between theoretical terms and observational terms, the latter capable of semantic analysis in observational and logical terms.

These difficulties for logical positivism suggest, but do not entail, scientific realism, and led to the development of realism as a philosophy of science.

Realism became the dominant philosophy of science after positivism. [2] :70 Bas van Fraassen in his book The Scientific Image (1980) developed constructive empiricism as an alternative to realism. Responses to van Fraassen have sharpened realist positions and lead to some revisions of scientific realism.

Arguments for and against scientific realism

One of the main arguments for scientific realism centers on the notion that scientific knowledge is progressive in nature, and that it is able to predict phenomena successfully. [3] Many scientific realists (e.g., Ernan McMullin, Richard Boyd) think the operational success of a theory lends credence to the idea that its more unobservable aspects exist, because they were how the theory reasoned its predictions. For example, a scientific realist would argue that science must derive some ontological support for atoms from the outstanding phenomenological success of all the theories using them.

Arguments for scientific realism often appeal to abductive reasoning or "inference to the best explanation" (Lipton, 2004). For instance, one argument commonly used—the "miracle argument" or "no miracles argument"—starts out by observing that scientific theories are highly successful in predicting and explaining a variety of phenomena, often with great accuracy. Thus, it is argued that the best explanation—the only explanation that renders the success of science to not be what Hilary Putnam calls "a miracle"—is the view that our scientific theories (or at least the best ones) provide true descriptions of the world, or approximately so. [4]

Bas van Fraassen replies with an evolutionary analogy: "I claim that the success of current scientific theories is no miracle. It is not even surprising to the scientific (Darwinist) mind. For any scientific theory is born into a life of fierce competition, a jungle red in tooth and claw. Only the successful theories survive—the ones which in fact latched on to actual regularities in nature." (The Scientific Image, 1980)

Some have argued that the no miracles argument commits the base rate fallacy. [5]

Realists reply that replacement of particular realist theories with better ones is to be expected due to the progressive nature of scientific knowledge, and when such replacements occur only superfluous unobservables are dropped. For example, Albert Einstein's theory of special relativity showed that the concept of the luminiferous ether could be dropped because it had contributed nothing to the success of the theories of mechanics and electromagnetism. On the other hand, when theory replacement occurs, a well-supported concept, such as the concept of atoms, is not dropped but is incorporated into the new theory in some form. These replies can lead scientific realists to structural realism.

However, these arguments ignore the fact that many scientists are not realists. During the development of quantum mechanics in the 1920s, the dominant philosophy of science was logical positivism. The alternative realist Bohm interpretation and many-worlds interpretation of quantum mechanics do not make such a revolutionary break with the concepts of classical physics.

Another argument against scientific realism, deriving from the underdetermination problem, is not so historically motivated as these others. It claims that observational data can in principle be explained by multiple theories that are mutually incompatible. Realists might counter by saying that there have been few actual cases of underdetermination in the history of science. Usually the requirement of explaining the data is so exacting that scientists are lucky to find even one theory that fulfills it. Furthermore, if we take the underdetermination argument seriously, it implies that we can know about only what we have directly observed. For example, we could not theorize that dinosaurs once lived based on the fossil evidence because other theories (e.g., that the fossils are clever hoaxes) can account for the same data.

According to the incompatible models argument, in certain cases the existence of diverse models for a single phenomenon can be taken as evidence of anti-realism. [6] One example is due to Margaret Morrison, who worked to show that the shell model and the liquid-drop model give contradictory descriptions of the atomic nucleus, even though both models are predictive. [7]

Logical positivism, later called logical empiricism, and both of which together are also known as neopositivism, was a movement in Western philosophy whose central thesis was the verification principle. This theory of knowledge asserted that only statements verifiable through direct observation or logical proof are meaningful. Starting in the late 1920s, groups of philosophers, scientists, and mathematicians formed the Berlin Circle and the Vienna Circle, which, in these two cities, would propound the ideas of logical positivism.

Willard Van Orman Quine was an American philosopher and logician in the analytic tradition, recognized as "one of the most influential philosophers of the twentieth century." From 1930 until his death 70 years later, Quine was continually affiliated with Harvard University in one way or another, first as a student, then as a professor. He filled the Edgar Pierce Chair of Philosophy at Harvard from 1956 to 1978. 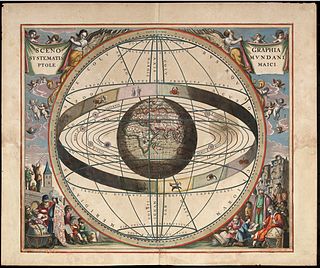 Eliminative materialism is the claim that people's common-sense understanding of the mind is false and that certain classes of mental states that most people believe in do not exist. It is a materialist position in the philosophy of mind. Some supporters of eliminativism argue that no coherent neural basis will be found for many everyday psychological concepts such as belief or desire, since they are poorly defined. Rather, they argue that psychological concepts of behaviour and experience should be judged by how well they reduce to the biological level. Other versions entail the non-existence of conscious mental states such as pain and visual perceptions.

In philosophy, constructive empiricism is a form of empiricism.

In the philosophy of science, underdetermination is the idea that evidence available to us at a given time may be insufficient to determine what beliefs we should hold in response to it. Underdetermination says that all evidence necessarily underdetermines any scientific theory.

The deductive-nomological model, also known as Hempel's model, the Hempel–Oppenheim model, the Popper–Hempel model, or the covering law model, is a formal view of scientifically answering questions asking, "Why...?". The DN model poses scientific explanation as a deductive structure—that is, one where truth of its premises entails truth of its conclusion—hinged on accurate prediction or postdiction of the phenomenon to be explained.

The Duhem–Quine thesis, also called the Duhem–Quine problem, after Pierre Duhem and Willard Van Orman Quine, is that it is impossible to test a scientific hypothesis in isolation, because an empirical test of the hypothesis requires one or more background assumptions. In recent decades the set of associated assumptions supporting a thesis sometimes is called a bundle of hypotheses.

The following outline is provided as an overview of and topical guide to epistemology:

Inductivism is the traditional, still commonplace, but implausible, view of scientific method to develop scientific theories. Although involving inductive reasoning, it aims to be, much more, a systematic research approach that, applied diligently, enables scientists to objectively discover the sole naturally true theory in each domain.

Entity realism, sometimes equated with referential realism, is a philosophical position within the debate about scientific realism. It is a variation of realism that restricts warranted belief to only certain entities.

Larry Laudan, is a contemporary American philosopher of science and epistemologist. He has strongly criticized the traditions of positivism, realism, and relativism, and he has defended a view of science as a privileged and progressive institution against popular challenges. Laudan's philosophical view of "research traditions" is seen as an important alternative to Imre Lakatos's "research programs."

Structuralism is an active research program in the philosophy of science, which was first developed in the late 1960s and throughout the 1970s by several analytic philosophers.