Last updated May 12, 2020
Rule that has to be followed or is an inevitable consequence of something, such as the laws observed in nature
For other uses, see Principle (disambiguation).
Not to be confused with Principal.

A principle is a proposition or value that is a guide for behavior or evaluation. In law, it is a rule that has to be or usually is to be followed, or can be desirably followed, or is an inevitable consequence of something, such as the laws observed in nature or the way that a system is constructed. The principles of such a system are understood by its users as the essential characteristics of the system, or reflecting system's designed purpose, and the effective operation or use of which would be impossible if any one of the principles was to be ignored. [2] A system may be explicitly based on and implemented from a document of principles as was done in IBM's 360/370 Principles of Operation.

Examples of principles are, entropy in a number of fields, least action in physics, those in descriptive comprehensive and fundamental law: doctrines or assumptions forming normative rules of conduct, separation of church and state in statecraft, the central dogma of molecular biology, fairness in ethics, etc.

In common English, it is a substantive and collective term referring to rule governance, the absence of which, being "unprincipled", is considered a character defect. It may also be used to declare that a reality has diverged from some ideal or norm as when something is said to be true only "in principle" but not in fact.

A principle represents values that orient and rule the conduct of persons in a particular society. To "act on principle" is to act in accordance with one's moral ideals. [4] Principles are absorbed in childhood through a process of socialization. There is a presumption of liberty of individuals that is restrained. Exemplary principles include First, do no harm, the golden rule and the doctrine of the mean.

As a juridic law

It represents a set of values that inspire the written norms that organize the life of a society submitting to the powers of an authority, generally the State. The law establishes a legal obligation, in a coercive way; it therefore acts as principle conditioning of the action that limits the liberty of the individuals. See, for examples, the territorial principle, homestead principle, and precautionary principle.

As axiom or logical fundament

The principle states that every event has a rational explanation. [6] The principle has a variety of expressions, all of which are perhaps best summarized by the following:

According to Aristotle, “It is impossible for the same thing to belong and not to belong at the same time to the same thing and in the same respect.” [7] For example, it is not possible that in exactly the same moment and place, it rains and doesn't rain. [8]

The principle of the excluding third or "principium tertium exclusum" is a principle of the traditional logic formulated canonically by Leibniz as: either A is B or A isn't B. It is read the following way: either P is true, or its denial ¬P is. [9] It is also known as "tertium non datur" ('A third (thing) is not). Classically it is considered to be one of the most important fundamental principles or laws of thought (along with the principles of identity, no contradiction and sufficient reason).

A cosmological argument, in natural theology and natural philosophy, is an argument in which the existence of God is inferred from alleged facts concerning causation, explanation, change, motion, contingency, dependency, or finitude with respect to the universe or some totality of objects. It is traditionally known as an argument from universal causation, an argument from first cause, or the causal argument.. Whichever term is employed, there are three basic variants of the argument, each with subtle yet important distinctions: the arguments from in causa (causality), in esse (essentiality), and in fieri (becoming).

In logic, the law of non-contradiction (LNC) states that contradictory propositions cannot both be true in the same sense at the same time, e. g. the two propositions "A is B" and "A is not B" are mutually exclusive. Formally this is expressed as the tautology ¬(p ∧ ¬p).

In logic, the law of excluded middle states that for any proposition, either that proposition is true or its negation is true. It is one of the so called three laws of thought, along with the law of noncontradiction, and the law of identity. The law of excluded middle is logically equivalent to the law of noncontradiction by De Morgan's laws; however, no system of logic is built on just these laws, and none of these laws provide inference rules, such as modus ponens or De Morgan's laws. 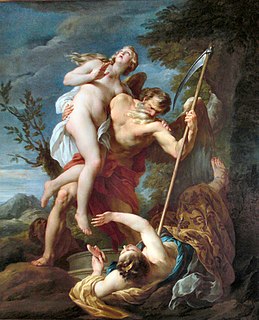 Truth is most often used to mean being in accord with fact or reality, or fidelity to an original or standard. Truth is also sometimes defined in modern contexts as an idea of "truth to self", or authenticity.

A syllogism is a kind of logical argument that applies deductive reasoning to arrive at a conclusion based on two or more propositions that are asserted or assumed to be true.

In philosophy, term logic, also known as traditional logic, syllogistic logic or Aristotelian logic, is a loose name for an approach to logic that began with Aristotle and that was dominant until the advent of modern predicate logic in the late nineteenth century. This entry is an introduction to the term logic needed to understand philosophy texts written before it was replaced as a formal logic system by predicate logic. Readers lacking a grasp of the basic terminology and ideas of term logic can have difficulty understanding such texts, because their authors typically assumed an acquaintance with term logic.

The identity of indiscernibles is an ontological principle that states that there cannot be separate objects or entities that have all their properties in common. That is, entities x and y are identical if every predicate possessed by x is also possessed by y and vice versa; to suppose two things indiscernible is to suppose the same thing under two names. It states that no two distinct things can be exactly alike, but this is intended as a metaphysical principle rather than one of natural science. A related principle is the indiscernibility of identicals, discussed below.

The principle of sufficient reason states that everything must have a reason or a cause. The modern formulation of the principle is usually attributed to Gottfried Leibniz, although the idea was conceived of and utilized by various philosophers who preceded him, including Anaximander, Parmenides, Archimedes, Plato and Aristotle, Cicero, Avicenna, Thomas Aquinas, and Spinoza. Some philosophers have associated the principle of sufficient reason with "ex nihilo nihil fit". Hamilton identified the laws of inference modus ponens with the "law of Sufficient Reason, or of Reason and Consequent" and modus tollens with its contrapositive expression.

The laws of thought are fundamental axiomatic rules upon which rational discourse itself is often considered to be based. The formulation and clarification of such rules have a long tradition in the history of philosophy and logic. Generally they are taken as laws that guide and underlie everyone's thinking, thoughts, expressions, discussions, etc. However, such classical ideas are often questioned or rejected in more recent developments, such as intuitionistic logic, dialetheism and fuzzy logic.

In logic, the law of identity states that each thing is identical with itself. It is the first of the three laws of thought, along with the law of noncontradiction, and the law of excluded middle. However, no system of logic is built on just these laws, and none of these laws provide inference rules, such as modus ponens or DeMorgan's Laws. 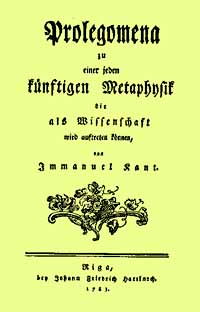 Prolegomena to Any Future Metaphysics That Will Be Able to Present Itself as a Science is a book by the German philosopher Immanuel Kant, published in 1783, two years after the first edition of his Critique of Pure Reason. One of Kant's shorter works, it contains a summary of the Critique‘s main conclusions, sometimes by arguments Kant had not used in the Critique. Kant characterizes his more accessible approach here as an "analytic" one, as opposed to the Critique‘s "synthetic" examination of successive faculties of the mind and their principles.

In propositional logic, transposition is a valid rule of replacement that permits one to switch the antecedent with the consequent of a conditional statement in a logical proof if they are also both negated. It is the inference from the truth of "A implies B" the truth of "Not-B implies not-A", and conversely. It is very closely related to the rule of inference modus tollens. It is the rule that:

"Critique of the Kantian philosophy" is a criticism Arthur Schopenhauer appended to the first volume of his The World as Will and Representation (1818). He wanted to show Immanuel Kant's errors so that Kant's merits would be appreciated and his achievements furthered.

The axiom of reducibility was introduced by Bertrand Russell in the early 20th century as part of his ramified theory of types. Russell devised and introduced the axiom in an attempt to manage the contradictions he had discovered in his analysis of set theory.

Logic is the systematic study of the forms of inference, i.e. the relations that lead to the acceptance of one proposition on the basis of a set of other propositions (premises). More broadly, logic is the analysis and appraisal of arguments.