Troglohyphantes vignai is a species of cave spider of the family Linyphiidae. It is endemic to Italy.

Troglohyphantes vignai is a small sized spider with a body length ranging from 3.05 mm to 3.35 mm. [1] It shows remarkable adaptations to the subterranean life, namely loss of pigmentation, reduction of the eye apparatus, thinning of integuments and heavy spination. [2]

Troglohyphantes vignai was described by Brignoli from specimens collected by Augusto Vigna Taglianti (to whom the species was dedicated) in the cave Buco di Valenza. In the same publication, Pier Marcello Brignoli also described a second Troglohyphantes species (T. rupicapra [2] ), which is distinguished from T. vignai by small morphological features. In recent years, the species validity of T. rupicapra was questioned by Pesarini, [3] who proposed the synonymy T. rupicapra = T. vignai. Such synonymy was recently confirmed on genetic base, [4] and its currently accepted in the World Spider Catalog. [5]

Troglohyphantes vignai is endemic to the Western Italian Alps, distributed from the Cottian to the Maritime Alps. [6] Populations of T. vignai are highly isolated from genetic point of view. The diversification of extant T. vignai lineages occurred during the Pleistocene glaciations. [4]

Preferentially found in caves and other mad-made subterranean habitats. [6] The species show a preference for prey-rich areas of the cave, where the climatic stability is higher. [7]

Females and juveniles are found through the whole year. Males are commonly found from August to January, with a sex ratio (females:males) of 2.4:1. [7]

The Tooth Cave spider, formerly Neoleptoneta myopica, now Tayshaneta myopica, is a 1.6 mm long spider in the family Leptonetidae. It is endemic to limestone caves near Austin, Texas in the United States and is considered an endangered species.

Pimoidae is a small family of araneomorph spiders first described by J. Wunderlich in 1986. It contains 37 species in four genera and is monophyletic. It is closely related to the Linyphiidae, and is sometimes treated as synonymous with that family.

Meta menardi, the European cave spider, is a long-jawed orb-weaving spider. It is also known as the orbweaving cave spider, the cave orbweaver and, in context, simply the cave spider.

Troglohyphantes gracilis, one of several species to be occasionally called Kočevje subterranean spider, is a species of spider in the family Linyphiidae. It is endemic to Slovenia.

Troglohyphantes is a genus of sheet weavers that was first described by G. Joseph in 1881. The genus name is a combination of the Ancient Greek τρώγλη (troglo-), meaning "cave (dweller)", and -hyphantes, a common ending for linyphiid genera.

Troglohyphantes similis, one of several species occasionally called the Kočevje subterranean spider is a species of spider in the family Linyphiidae. It is endemic to Slovenia.

Troglohyphantes spinipes, one of several species sometimes referred to as the Kočevje subterranean spider, is a species of spider in the family Linyphiidae. It is endemic to Slovenia.

Harpactea is a genus of woodlouse hunting spiders that was first described by W. S. Bristowe in 1939. They are non-web building predators that forage on the ground and on tree trunks at night, mainly in xerothermic forests. During the day, they hide in silk retreats they build under rocks or bark.

Italy has the highest level of faunal biodiversity in Europe, with over 57,000 species recorded, representing more than a third of all European fauna. This is due to various factors. The Italian peninsula is in the center of the Mediterranean Sea, forming a corridor between central Europe and North Africa, and it has 8,000 km of coastline. Italy also receives species from the Balkans, Eurasia, and the Middle East. Italy's varied geological structure, including the Alps and the Apennines, Central Italian woodlands, and Southern Italian Garigue and Maquis shrubland, also contribute to high climate and habitat diversity.

Cicurina madla is a rare species of spider in the family Dictynidae known by the common name Madla Cave meshweaver. It is endemic to Texas, United States, where it is known to originate from only eight or nine caves in Bexar County. This is one of a small number of invertebrates endemic to the karst caves of Bexar County that were federally listed as endangered species in the year 2000. Another spider from the caves was described as Cicurina venii, and given the common name Braken Bat Cave meshweaver. In 2018, it was synonymized with C. madla.

Histopona is a genus of funnel weavers first described as a sub-genus of Hadites by Tamerlan Thorell in 1869. It was elevated to genus by Brignoli in 1972.

Pimoa rupicola is a species of the spiders family Pimoidae found in France and Italy. First described in 1884, it is one of twenty-eight described species in the genus Pimoa.

Troglohyphantes nigraerosae is a species of cave spider of the family Linyphiidae. It is endemic to Italy.

Sardostalita is a monotypic genus of European woodlouse hunting spiders containing the single species, Sardostalita patrizii. It was first described by F. Gasparo, who moved the sole species to its own genus when a male was discovered in 1999. It has only been found on Sardinia.

Christa Laetitia Deeleman-Reinhold is a Dutch arachnologist. She graduated from the Leiden University in 1978. She specializes in spiders from Southeast Asia and Southern Europe, particularly cave-dwelling and tropical spiders. She donated a collection of about 25,000 Southeast Asian spiders, the largest collection of Southeast Asian spiders in existence, to the Naturalis Biodiversity Center in Leiden, The Netherlands. In addition to numerous articles, she has written the book Forest Spiders of South East Asia (2001). She is married to arachnologist Paul Robert Deeleman, with whom she has co-authored multiple publications.

Spintharus leonardodicaprioi is a species of theridiid spider. It is found in the Dominican Republic and was named after the actor Leonardo DiCaprio for his environmental activism. It was named alongside several other Spintharus species whose specific epithets honored celebrities, and it received media coverage from around the world due to its name. 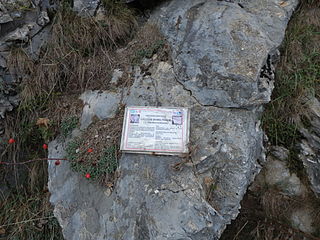 The Moltrasio Formation also known as Lombardische Kieselkalk Formation is a geological formation in Italy. This Formation mostly developed on the Lower ot Middle Sinemurian stage of the Lower Jurassic, where on the Lombardian basin tectonic activity modified the current marine and terrestrial habitats. Here it was developed a series of marine-related depositional settings, represented by an outcrop of 550–600 m of grey Calcarenites and Calcilutites with chert lenses and marly interbeds, that recovers the Sedrina, Moltrasio and Domaro Formations. This was mostly due to the post-Triassic crisis, that was linked locally to tectonics. The Moltrasio Formation is considered a continuation of the Sedrina Limestone and the Hettangian Albenza Formation, and was probably a shallow water succession, developed on the pasive margin of the westernmost Southern Alps. It is known due to the exquisite preservation observed on the Outcrop on Osteno, where several kinds of marine biota have been recovered.