Trumpler 2 is an open cluster located in the constellation Perseus. It is approximately 2000 light-years from Earth, placing its position within the Perseus Arm of the Milky Way Galaxy. Although at this large distance, it can be seen with the naked eye, at magnitude 6. [1]

It has a central red star named HD 16068 of spectral type K3.5II-III, and is visually the brightest star of the cluster as seen from Earth. [1]

Camelopardalis is a large but faint constellation of the northern sky representing a giraffe. The constellation was introduced in 1612 or 1613 by Petrus Plancius. Some older astronomy books give Camelopardalus or Camelopardus as alternative forms of the name, but the version recognized by the International Astronomical Union matches the genitive form, seen suffixed to most of its key stars. 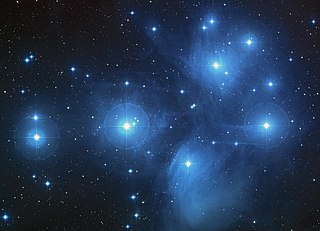 An open cluster is a group of up to a few thousand stars that were formed from the same giant molecular cloud and have roughly the same age. More than 1,100 open clusters have been discovered within the Milky Way Galaxy, and many more are thought to exist. They are loosely bound by mutual gravitational attraction and become disrupted by close encounters with other clusters and clouds of gas as they orbit the galactic center. This can result in a migration to the main body of the galaxy and a loss of cluster members through internal close encounters. Open clusters generally survive for a few hundred million years, with the most massive ones surviving for a few billion years. In contrast, the more massive globular clusters of stars exert a stronger gravitational attraction on their members, and can survive for longer. Open clusters have been found only in spiral and irregular galaxies, in which active star formation is occurring. 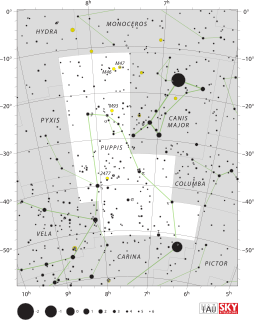 Puppis is a constellation in the southern sky. Puppis, the Poop Deck, was originally part of an over-large constellation, the ship of Jason and the Argonauts, Argo Navis, which centuries after its initial description, was divided into three parts, the other two being Carina, and Vela. Puppis is the largest of the three constellations in square degrees. It is one of the 88 modern constellations recognized by the International Astronomical Union. 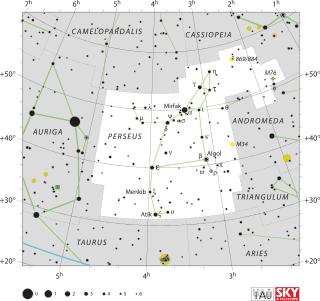 Perseus is a constellation in the northern sky, being named after the Greek mythological hero Perseus. It is one of the 48 ancient constellations listed by the 2nd-century astronomer Ptolemy, and among the 88 modern constellations defined by the International Astronomical Union (IAU). It is located near several other constellations named after ancient Greek legends surrounding Perseus, including Andromeda to the west and Cassiopeia to the north. Perseus is also bordered by Aries and Taurus to the south, Auriga to the east, Camelopardalis to the north, and Triangulum to the west. Some star atlases during the early 19th century also depicted Perseus holding the disembodied head of Medusa, whose asterism was named together as Perseus et Caput Medusae; however, this never came into popular usage.

The Carina Nebula or Eta Carinae Nebula is a large, complex area of bright and dark nebulosity in the constellation Carina, and is located in the Carina–Sagittarius Arm. The nebula is approximately 8,500 light-years (2,600 pc) from Earth.

Messier 29 or M29, also known as NGC 6913, is a quite small, bright open cluster of stars just south of the central bright star Gamma Cygni of a northerly zone of the sky, Cygnus. It was discovered by Charles Messier in 1764, and can be seen from Earth by using binoculars. 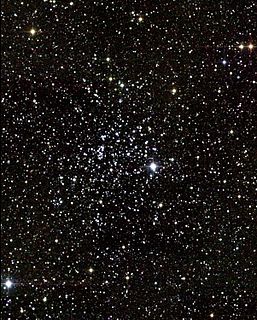 Messier 52 or M52, also known as NGC 7654, is an open cluster of stars in the highly northern constellation of Cassiopeia. It was discovered by Charles Messier on 1774. It can be seen from Earth under a good night sky with binoculars. The brightness of the cluster is influenced by extinction, which is stronger in the southern half.

The Perseus Arm is one of two major spiral arms of the Milky Way galaxy. The second major arm is called the Scutum–Centaurus Arm. The Perseus Arm begins from the distal end of the long Milky Way central bar. Previously thought to be 13,000 light-years away, it is now thought to lie 6,400 light years from the Solar System.

NGC 7510 is an open cluster of stars located around 11,400 light years away in the constellation Cepheus, near the border with Cassiopeia. At this distance, the light from the cluster has undergone extinction from interstellar gas and dust equal to E(B – V) = 0.90 ± 0.02 magnitude in the UBV photometric system. Its brightest member is a giant star with a stellar classification of B1.5 III. This cluster forms part of the Perseus Spiral Arm. It has a Trumpler class rating of II 2 m and is around 10 million years old.

NGC 637 is an open cluster of stars in the northern constellation of Cassiopeia, positioned about 1.5° to the WNW of the star Epsilon Cassiopeiae. The cluster was discovered on 9 November 1787 by German-born English astronomer William Herschel. It is located in the Perseus Arm of the Milky Way, at a distance of approximately 7.045 kilolight-years from the Sun. The cluster is small but compact, and is readily visible in a small telescope.

Ruprecht 147 or NGC 6774 is a dispersed star cluster in the Milky Way galaxy. It is about 1,000 light years away, which is close to Earth in comparison with other such clusters. In late summer, it can be seen with binoculars in the constellation of Sagittarius. The stars, bound by gravity, are about 2.5 to 3.25 billion years old. The cluster, discovered in 1830 by John Herschel, was sometimes thought to be an asterism due to its sparseness and location against the background of the richest part of the Milky Way, and also since the brightest stars in this old cluster perished long ago. In 1966 the Czech astronomer Jaroslav Ruprecht classified it as a type III 2 m open cluster under the Trumpler scheme. It received otherwise little attention until 2012, when it was identified as a potentially important reference gauge for stellar and Galactic astrophysics research, particularly the research of Sun-like stars.

Trumpler 16 is a massive open cluster that is home to some of the most luminous stars in the Milky Way galaxy. It is situated within the Carina Nebula complex in the Carina–Sagittarius Arm, located approximately 9,270 ly (2,842 pc) from Earth. The cluster has one star visible to the naked eye from the tropics southward, Eta Carinae. 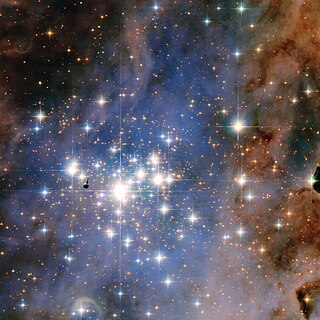 Carina OB1 is a giant OB association in the Carina Nebula, which is home to some of the most massive and luminous stars in the Milky Way Galaxy. It includes the young star clusters Collinder 228, NGC 3293, NGC 3324, IC 2581, Trumpler 14, Trumpler 15 and Trumpler 16, the last being the home of Eta Carinae. It also includes another massive and luminous star, HD 93129A. It is approximately 2,680 parsecs (8,700 ly) from Earth.

Trumpler 15 is an open cluster in the constellation Carina that lies on the outskirts of the Carina Nebula. Estimated ages of the stars in Trumpler 15 suggest that the cluster is slightly older than its sibling clusters Trumpler 14 and 16. 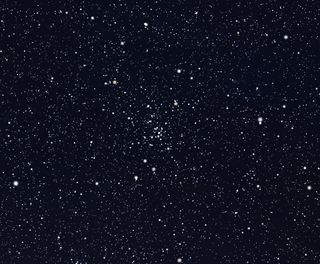 NGC 5617 is an open cluster in the constellation Centaurus. NGC 5617 forms a binary open cluster with Trumpler 22. It lies one degree west-northwest of Alpha Centauri.

NGC 1624 is a very young open cluster located in the constellation Perseus inside an emission nebula. It was discovered by the German-British astronomer William Herschel in 1790. NGC 1624 is located at about 20,000 ly away and the latest estimates give an age of less than 4 million years. The apparent magnitude is 11.8, and apparent diameter is about 3.0 arc minutes. Its celestial location is right ascension (α) 04h 40m 36.0s and declination (δ) +50° 27′ 42″.

NGC 957 is a loosely bound open cluster located in the constellation Perseus. It has an apparent magnitude of 7.6 and an approximate size of 11 arc-minutes.