Trustix Secure Linux was a Linux distribution intended for use on servers and focused on security and stability. It was a hardened and secure OS, meaning that non-essential services and binaries are not installed, while UNIX staples like Sendmail are replaced by programs like Postfix.

Trustix was originally produced by Trustix AS. The company was established late in 1997 by entrepreneurs from USA and Norway. The company went bankrupt in 2003 and Comodo Group bought the assets in November 2003. Shortly thereafter Comodo announced the end of the free version of Trustix Secure Linux. Not long thereafter Comodo changed their minds and the free version reappeared.

By late 2005 a series of budget cuts had resulted in many of the developers being laid off, and by early 2006 all members of the original Trustix team had left the company. Trustix Secure Linux continues to be maintained by a very small team of developers in India.[ citation needed ]

By late 2007 Comodo announced that it will discontinue all distribution, updates and direct support for Trustix Secure Linux effective December 31, 2007. [ citation needed ]

KDE is an international free software community that develops free and open-source software. As a central development hub, it provides tools and resources that allow collaborative work on this kind of software. Well-known products include the Plasma Desktop, Frameworks and a range of cross-platform applications like Krita or digiKam designed to run on Unix and Unix-like desktops, Microsoft Windows and Android.

XFree86 is an implementation of the X Window System. It was originally written for Unix-like operating systems on IBM PC compatibles and was available for many other operating systems and platforms. It is free and open source software under the XFree86 License version 1.1. It was developed by the XFree86 Project, Inc. The lead developer was David Dawes. The last released version was 4.8.0, released December 2008. The last XFree86 CVS commit was made on May 18, 2009; the project was confirmed dormant in December 2011. 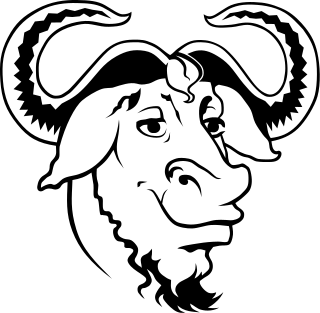 Skolelinux/Debian-Edu is a Linux distribution intended for educational use and a Debian Pure Blend. The free and open source software project was founded in Norway in 2001 and is now being internationally developed. Its name is a direct translation of "school linux" from Norwegian, skole being derived from the Latin word schola.

MontaVista Software is a company that develops embedded Linux system software, development tools, and related software. Its products are made for other corporations developing embedded systems such as automotive electronics, communications equipment, mobile phones, and other electronic devices and infrastructure.

Blackdown Java was a Linux port of Sun Microsystems's Java virtual machine, developed by a group of volunteers led by Juergen Kreileder, Steve Byrne, and Karl Asha, and included a team of volunteers from around the globe. The first version, 1.0.2, was released in October 1996, predating Sun's official Linux port.

openSUSE is a project that serves to promote the use of free and open-source software.

Caldera OpenLinux (COL) is a defunct Linux distribution. Caldera originally introduced it in 1997 based on the German LST Power Linux distribution, and then taken over and further developed by Caldera Systems since 1998. A successor to the Caldera Network Desktop put together by Caldera since 1995, OpenLinux was an early "business-oriented distribution" and foreshadowed the direction of developments that came to most other distributions and the Linux community generally.

SUSE Linux is a computer operating system developed by SUSE. It is built on top of the free and open source Linux kernel and is distributed with system and application software from other open source projects. SUSE Linux is of German origin, its name being an acronym of "Software und System-Entwicklung", and it was mainly developed in Europe. The first version appeared in early 1994, making SUSE one of the oldest existing commercial distributions. It is known for its YaST configuration tool.

GNOME is a free and open-source desktop environment for Linux operating systems. GNOME was originally an acronym for GNU Network Object Model Environment, but the acronym was dropped because it no longer reflected the vision of the GNOME project.

Mandriva S.A. was a public software company specializing in Linux and open-source software. Its corporate headquarters was in Paris, and it had development centers in Metz, France and Curitiba, Brazil. Mandriva, S.A. was the developer and maintainer of a Linux distribution called Mandriva Linux, as well as various enterprise software products. Mandriva was a founding member of the Desktop Linux Consortium.

Linspire is a commercial operating system based on Debian and Ubuntu and currently owned by PC/OpenSystems LLC. It had been owned by Linspire. Inc. from 2001 to 2008, and then by Xandros from 2008 to 2017.