Last updated August 16, 2021
For other ships with the same name, see USS Vogelgesang.

Vogelgesang was laid down at the Charleston Navy Yard, sometime in 1943. The contract for her construction was cancelled on 12 March 1944 before she could be launched, and the incomplete ship was scrapped.

On September 3, 1939, the British and French declarations of war on Germany initiated the Battle of the Atlantic. The United States Navy Chief of Naval Operations (CNO) established a combined air and ship patrol of the United States Atlantic coast, including the Caribbean, on September 4. President Franklin D. Roosevelt declared the United States' neutrality on September 5, and declared the naval patrol a Neutrality Patrol. Roosevelt's initiation of the Neutrality Patrol, which in fact also escorted British ships, as well as orders to U.S. Navy destroyers first to actively report U-boats, then "shoot on sight", meant American neutrality was honored more in the breach than observance.

Destroyer escort (DE) was the United States Navy mid-20th-century classification for a 20-knot (23 mph) warship designed with endurance to escort mid-ocean convoys of merchant marine ships. The Royal Navy and Commonwealth forces identified such warships as frigates, and that classification was widely accepted when the United States redesignated destroyer escorts as frigates (FF) in 1975. From circa 1954 until 1975 new-build US Navy ships designated as destroyer escorts (DE) were called ocean escorts. Destroyer escorts and frigates were mass-produced for World War II as a less expensive antisubmarine warfare alternative to fleet destroyers. Similar types of warships in other navies of the time included the 46 diesel-engined Kaibōkan of the Imperial Japanese Navy., 10 Kriegsmarine escort ships of the F-class and the two Amiral Murgescu-class vessels of the Romanian Navy.

USS Vogelgesang has been the name of more than one United States Navy ship, and may refer to: 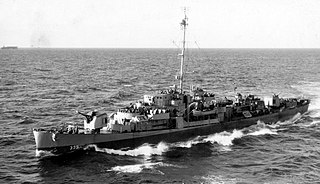 The John C. Butler class were destroyer escorts that originated during World War II. The lead ship was USS John C. Butler, commissioned on 31 March 1944. The class was also known as the WGT type from their Westinghouse geared turbine drive. Of the 293 ships originally planned, 206 were canceled in 1944 and a further four after being laid down; three were not completed until after the end of World War II.

The Cannon class was a class of destroyer escorts built by the United States primarily for antisubmarine warfare and convoy escort service during World War II. The lead ship, USS Cannon, was commissioned on 26 September 1943 at Wilmington, Delaware. Of the 116 ships ordered, 44 were cancelled and six were commissioned directly into the Free French Forces. Destroyer escorts were regular companions escorting vulnerable cargo ships. 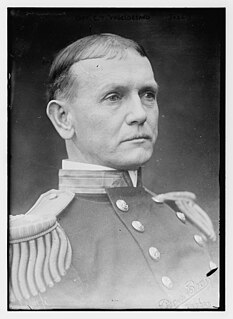 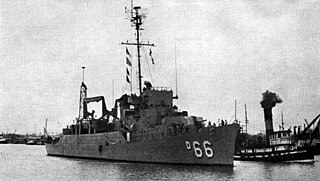 HMS Duff (K352) was a British Captain-class frigate of the Royal Navy that served during World War II. Originally constructed as the United States Navy Buckley class destroyer escort USS Lamons (DE-64), she was transferred to the Royal Navy before she was completed.

HMS Garlies (K475) was a British Captain-class frigate of the Royal Navy in commission during World War II. Originally constructed as the United States Navy Evarts-class destroyer escort USS Fleming (DE-271), she served in the Royal Navy from 1943 to 1945 and in the U.S. Navy as USS Garlies (DE-271) from August to October 1945.