Ulloa is a town and municipality located in the Department of Valle del Cauca, Colombia.

Aramecina is a municipality in the Honduran department of Valle.

Santa María is a municipality in the Nueva Segovia Department of Nicaragua.

Támesis is a town and municipality in the Colombian department of Antioquia. Part of the subregion of Southwestern Antioquia. It was established in 1858. The local economy is based on agriculture.

Area codes 610 and 484 are telephone area codes which serve the eastern and southeastern regions of Pennsylvania. The area includes areas to the west of Philadelphia, along with the cities of Allentown, Bethlehem, and Reading. It includes much of the Delaware Valley, including almost all of Delaware County and most of the Philadelphia Main Line.

Jelenča is one of the boroughs of Šabac City in the Mačva District of Serbia. The borough has a Serb ethnic majority. In the 2002 census, its population was found to be 1,803 people. 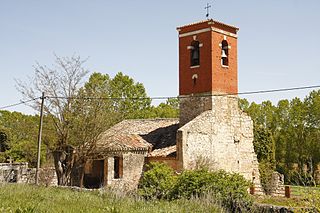 Brazacorta is a municipality and town located in the province of Burgos, Castile and León, Region of Ribera, Spain. According to the 2007 census (INE), the municipality has a population of 75 inhabitants. 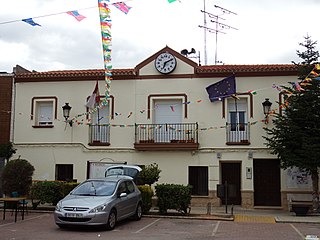 Tresjuncos is a municipality located in the province of Cuenca, Castile-La Mancha, Spain. According to the 2004 census (INE), the municipality has a population of 445 inhabitants. 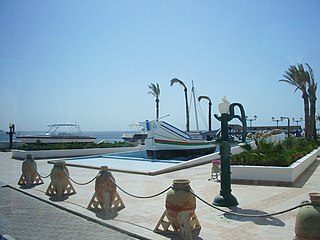 Ajim is a commune and port located on the Island of Djerba off the coast of Tunisia. It is Djerba's main fishing port and the closest city to the African continent. It had a population of 24,294 at the 2014 census.

Yoğunbulaq is a village in the municipality of Çobansığnaq in the Tovuz Rayon of Azerbaijan.

Prejłowo is a village in the administrative district of Gmina Purda, within Olsztyn County, Warmian-Masurian Voivodeship, in northern Poland. It lies approximately 4 kilometres (2 mi) north of Purda and 15 km (9 mi) east of the regional capital Olsztyn. It is located within the historic region of Warmia.

German submarine U-962 was a Type VIIC U-boat built for Nazi Germany's Kriegsmarine during World War II. Her keel was laid at the yards of Blohm & Voss in Hamburg on 7 April 1942. Launched on 17 December 1942, she was formally commissioned on 11 February 1943 and given to Oblt.z.S. Ernst Liesberg, who commanded the submarine on both of her active war patrols.

German submarine U-606 was a Type VIIC U-boat built for Nazi Germany's Kriegsmarine for service during World War II. She was laid down on 12 March 1941 by Blohm & Voss, Hamburg as yard number 582, launched on 27 November 1941 and commissioned on 22 January 1942 under Oblt.z.S. Hans Klatt.

German submarine U-734 was a Type VIIC U-boat built for Nazi Germany's Kriegsmarine for service during World War II. She was laid down on 20 October 1941 by Schichau-Werke, Danzig as yard number 1525, launched on 19 September 1942 and commissioned on 5 December 1942 under Oberleutnant zur See Hans-Jörg Blauert.

German submarine U-717 was a Type VIIC U-boat of Nazi Germany's Kriegsmarine during World War II. The submarine was laid down on 24 April 1942 at the H. C. Stülcken Sohn yard at Hamburg, launched on 20 February 1943, and commissioned on 19 May 1943 under the command of Oberleutnant zur See Siegfried von Rothkirch und Panthen. Attached to 5th U-boat Flotilla based at Kiel, U-717 completed her training period on 31 July 1944 and was assigned to front-line service.