Uncensored is a 1942 British World War II drama, directed by Anthony Asquith for Gainsborough Pictures and starring Eric Portman and Phyllis Calvert. The film was produced by Edward Black, with cinematography from Arthur Crabtree and screenplay by Rodney Ackland and Terence Rattigan from a novel by Oscar Millard.

Uncensored is set in occupied Belgium and shares the propagandistic tone of many British films of its era. While its reception was mainly positive, it was criticised in some quarters for its unrealistic portrayal of the occupying German forces as bungling, incompetent and easily outwitted buffoons. [1]

On its original UK release Uncensored ran for 108 minutes; for overseas distribution however it was trimmed to 83 minutes and the cut version subsequently became more widely circulated.

Before the Nazi occupation of Belgium, Brussels nightclub owner André Delange (Portman) used to publish an anti-Nazi newspaper called La Libre Belgique (Free Belgium) which was distributed secretly. In the aftermath of the German occupation, his underground colleagues in the Belgian resistance suggest reviving the newspaper, to which Delange agrees. With the help of his chief assistant Julie Lanvin (Calvert) and a small band of helpers, La Libre Belgique once more begins to circulate. When the Germans find out of its existence, they offer a reward to anyone who is prepared to identify those responsible for its publication.

Delange's business partner Charles Neels (Peter Glenville), disgruntled with their business relationship and jealous of Delange's relationship with the attractive Julie, betrays the whereabouts of the newspaper's makeshift office. The premises are raided and those present in the building arrested, but Delange and Julie manage to avoid capture. The Germans announce to the populace that La Libre Belgique is no more and its perpetrators are in custody; however Delange and Julie succeed in printing and distributing another edition, making the Germans look foolish and leading them to assume that the information given to them by their informant was false. They release those arrested, who they now believe not to be the people they were looking for, and vow to continue searching for the real culprits. Meanwhile the group led by Delange comes together again, and their work continues.

The Walloon Legion was a collaborationist military formation recruited among French-speaking volunteers from German-occupied Belgium, notably from Brussels and Wallonia, during World War II. It was formed in the aftermath of the German invasion of the Soviet Union and fought on the Eastern Front as part of the German Army (Wehrmacht) and later the Waffen SS alongside similar formations from other parts of German-occupied Western Europe. 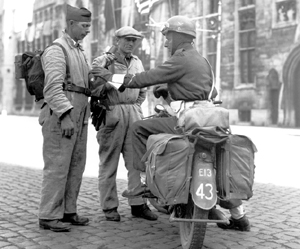 The Belgian Resistance collectively refers to the resistance movements opposed to the German occupation of Belgium during World War II. Within Belgium, resistance was fragmented between many separate organizations, divided by region and political stances. The resistance included both men and women from both Walloon and Flemish parts of the country. Aside from sabotage of military infrastructure in the country and assassinations of collaborators, these groups also published large numbers of underground newspapers, gathered intelligence and maintained various escape networks that helped Allied airmen trapped behind enemy lines escape from German-occupied Europe.

Alexandre Galopin was a Belgian businessman notable for his role in German-occupied Belgium during World War II. Galopin was director of the Société Générale de Belgique, a major Belgian company, and chairman of the board of the motor and armaments company Fabrique Nationale d'Armes de Guerre (FN). At the head of a group of Belgian industrialists and financiers, he gave his name to the "Galopin Doctrine" which prescribed how Belgian industry should deal with the moral and economic choices imposed by the occupation. In February 1944, he was assassinated by Flemish collaborators from the DeVlag group. 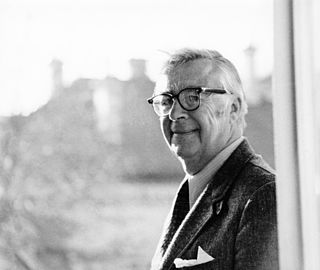 Oscar Millard was an English writer who published two books set in Belgium before finding success in Hollywood as a screenwriter. 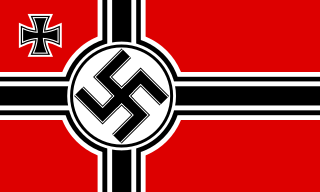 The Military Administration in Belgium and Northern France was an interim occupation authority established during the Second World War by Nazi Germany that included present-day Belgium and the French departments of Nord and Pas-de-Calais. The administration was also responsible for governing the zone interdite, a narrow strip of territory running along the French northern and eastern borders. It remained in existence until July 1944. Plans to transfer Belgium from the military administration to a civilian administration were promoted by the SS, and Hitler had been ready to do so until Autumn 1942, when he put off the plans for what was intended to be the time being but ended up permanent to the end of German occupation. The SS had suggested either Josef Terboven or Ernst Kaltenbrunner as the Reich Commissioner of the civilian administration. 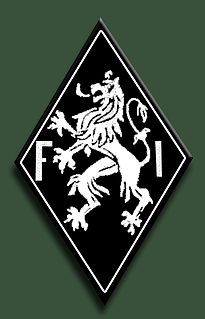 The Independent Front was a left-wing faction of the Belgian Resistance in German-occupied Belgium in World War II. It was founded in March 1941 by Dr Albert Marteux of the Communist Party of Belgium, Father André Roland, and Fernand Demany, another communist. The aim of the organisation was to unite Belgian resistance groups of all opinions and political leanings; nonetheless the only political party that was affiliated as such was the Communist Party. The FI operated a significant propaganda, social and paramilitary organization, in addition to its military and sabotage functions and operated in competition with the larger pro-government Secret Army. 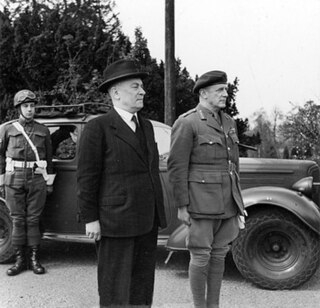 The Belgian government in London, also known as the Pierlot IV Government, was the government in exile of Belgium between October 1940 and September 1944 during World War II. The government was tripartite, involving ministers from the Catholic, Liberal and Labour Parties. After the invasion of Belgium by Nazi Germany in May 1940, the Belgian government, under Prime Minister Hubert Pierlot, fled first to Bordeaux in France and then to London, where it established itself as the only legitimate representation of Belgium to the Allies. 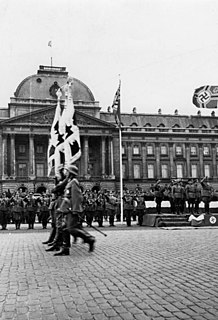 Despite being neutral at the start of World War II, Belgium and its colonial possessions found themselves at war after the country was invaded by German forces on 10 May 1940. After 18 days of fighting in which Belgian forces were pushed back into a small pocket in the north-east of the country, the Belgian military surrendered to the Germans, beginning an occupation that would endure until 1944. The surrender of 28 May was ordered by King Leopold III without the consultation of his government and sparked a political crisis after the war. Despite the capitulation, many Belgians managed to escape to the United Kingdom where they formed a government and army-in-exile on the Allied side. 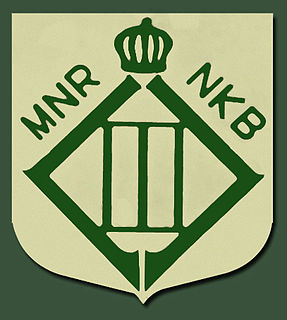 The National Royalist Movement was a group within the Belgian Resistance in German-occupied Belgium during World War II. It was active chiefly in Brussels and Flanders and was the most politically right-wing of the major Belgian resistance groups. 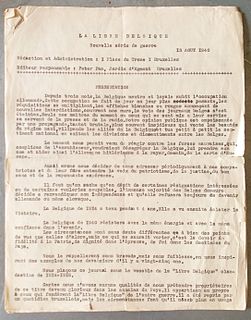 During World War II, La Libre Belgique was one of the most notable underground newspapers published in German-occupied Belgium. This was partly a result of the success of a newspaper with the same title that had been produced in German-occupied Belgium during World War I. Though a number of editions appeared in 1940 and 1941, the most enduring La Libre Belgique published during the World War II was the so-called "Peter Pan" edition which ran to 85 issues with a circulation of 10,000 to 30,000 each.

Paul Victor Antoine Struye was a Belgian lawyer, politician, and journalist, notable for his writings during World War II. A native of Ghent, Struye served in the Belgian Army during World War I. He qualified as a lawyer in the years after the war and also worked as a journalist at the Catholic newspaper La Libre Belgique. A royalist and patriot, Struye was soon attracted to the Belgian resistance during World War II and was influential once La Libre Belgique became an underground newspaper. His diary of life under occupation and writings on public opinion are important historical sources on the period. After the war, Struye entered politics in the Christian Social Party as a senator and held the portfolio of Minister of Justice (1947-1948). He subsequently held the post of President of the Senate on two occasions. 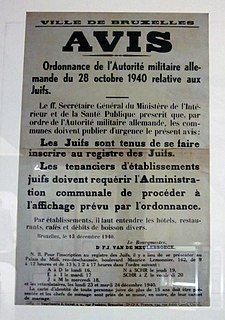 The Holocaust in Belgium was the systematic dispossession, deportation, and murder of Jews and Roma in German-occupied Belgium during World War II. Out of about 75,000 Jews in the country in 1940, around 24,000 were murdered during the Holocaust. 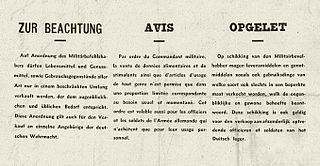 The Committee of Secretaries-General was a committee of senior civil servants and technocrats in German-occupied Belgium during World War II. It was formed shortly before the occupation to oversee the continued functioning of the civil service and state bureaucracy independently of the German military occupation administration. 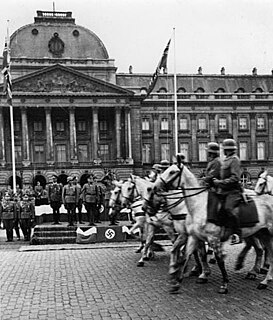 The German occupation of Belgium during World War II began on 28 May 1940, when the Belgian army surrendered to German forces, and lasted until Belgium's liberation by the Western Allies between September 1944 and February 1945. It was the second time in less than thirty years that Germany had occupied Belgium. 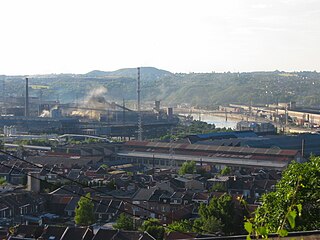 The Strike of the 100,000 was an 8-day strike in German-occupied Belgium which took place from 10–18 May 1941. It was led by Julien Lahaut, head of the Belgian Communist Party, even though the Nazi—Soviet Pact was still in force. The object of the strike was to demand a wage increase though it was also an act of passive resistance to the German occupation. 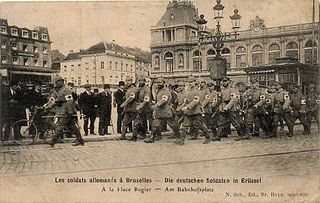 The German occupation of Belgium of World War I was a military occupation of Belgium by the forces of the German Empire between 1914 and 1918. Beginning in August 1914 with the invasion of neutral Belgium, the country was almost completely overrun by German troops before the winter of the same year as the Allied forces withdrew westwards. The Belgian government went into exile, while King Albert I and the Belgian Army continued to fight on a section of the Western Front. Under the German military, Belgium was divided into three separate administrative zones. The majority of the country fell within the General Government, a formal occupation administration ruled by a German general, while the others, closer to the front line, came under more repressive direct military rule.

Various kinds of clandestine media emerged under German occupation during World War II. By 1942, Nazi Germany occupied much of continental Europe. The widespread German occupation saw the fall of public media systems in France, Belgium, Poland, Norway, Czechoslovakia, Northern Greece, and the Netherlands. All press systems were put under the ultimate control of Joseph Goebbels, the German Minister of Propaganda. 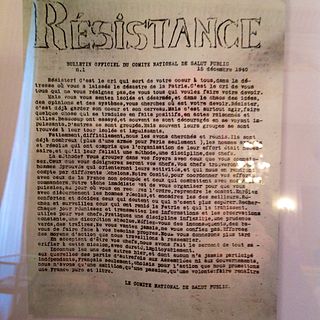 The clandestine newspapers of the Resistance were newspapers created in France during Second World War by the movements of Resistance to the German occupation of France, to disseminate their ideas, which played an important role in the history of French journalism, particularly during the 1944 Freedom of the Press Ordinances.