Ungulidaedalea is a fungal genus in the family Fomitopsidaceae. [2] The genus was circumscribed by Chinese mycologists in 2016 to contain the single species Ungulidaedalea fragilis, [1] a fungus that was described as new in 2014 with the name Fomitopsis fragilis. The holotype of this fungus was collected in Jianfengling Nature Reserve, in Ledong County (Hainan). [3] The generic name Ungulidaedalea refers to the resemblance between this species and Daedalea , and also to the hoof-shaped (ungulate) form of the fruit body. [1] Ungulidaedalea fragilis has rather fragile fruit bodies with a dark brown crust and large angular pores (numbering 1–2 per millimetre) on the cap underside. Microscopic characteristics include its densely septated skeletal hyphae, and oblong-ellipsoid spores that measure 4–5.2 by 2.2–2.8  μm. [3]

The Fomitopsidaceae are a family of fungi in the order Polyporales. Most species are parasitic on woody plants, and tend to cause brown rots. The name comes from Fomitopsis + -aceae.

In biological taxonomy, circumscription is the definition of a taxon, that is, a group of organisms.

The Polyporales are an order of about 1800 species of fungi in the division Basidiomycota. The order includes some polypores as well as many corticioid fungi and a few agarics. Many species within the order are saprotrophic, most of them wood-rotters. Some genera, such as Ganoderma and Fomes, contain species that attack living tissues and then continue to degrade the wood of their dead hosts. Those of economic importance include several important pathogens of forest and amenity trees and a few species that cause damage by rotting structural timber. Some of the Polyporales are commercially cultivated and marketed for use as food items or in traditional Chinese medicine.

Fomitopsis betulina, commonly known as the birch polypore, birch bracket, or razor strop, is a common bracket fungus and, as the name suggests, grows almost exclusively on birch trees. The brackets burst out from the bark of the tree, and these fruit bodies can last for more than a year. Technically, it is an edible mushroom, with a strong, pleasant "mushroomy" odor but a bitter taste. The velvety cut surface of the fruit body was traditionally used as a strop for finishing the edges on razors, and also as a mounting material for insect collections. 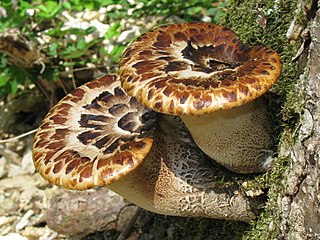 The Polyporaceae are a family of poroid fungi belonging to the Basidiomycota. The flesh of their fruit bodies varies from soft to very tough. Most members of this family have their hymenium in vertical pores on the underside of the caps, but some of them have gills or gill-like structures. Many species are brackets, but others have a definite stipe – for example, Polyporus badius. 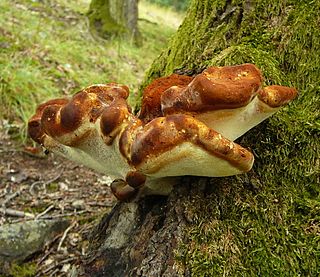 Buglossoporus is a genus of fungi in the family Fomitopsidaceae. The genus was circumscribed in 1966 by Czech mycologists František Kotlába and Zdeněk Pouzar, with Buglossoporus quercinus as the type species. In some works, Buglossoporus has been treated as a synonym of Piptoporus. 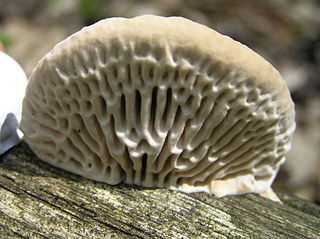 Daedalea is a genus of fungi in the family Fomitopsidaceae. The genus was circumscribed in 1801 by mycologist Christian Hendrik Persoon, based on the type D. quercina and four other species. The generic name is derived from the Ancient Greek δαιδαλεος.

Fomitopsis is a genus of more than 40 species of bracket fungi in the family Fomitopsidaceae.

Fomitiporia is a genus of fungi in the family Hymenochaetaceae. According to a 2008 estimate, the widely distributed genus contains 11 species, though three new species were identified in 2010 in sub-Saharan Africa using multigene molecular phylogenetic analysis, and two more were named in a 2013 article. In 2011 it was announced that a specimen of the species F. ellipsoidea was discovered with a fruit body that is largest known of any fungus. However, the species has since been moved to Phellinus. 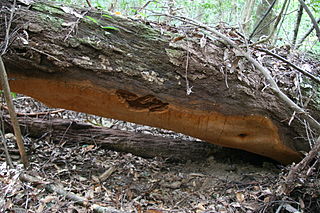 Phellinus ellipsoideus is a species of polypore fungus in the family Hymenochaetaceae, a specimen of which produced the largest fungal fruit body ever recorded. Found in China, the fruit bodies produced by the species are brown, woody basidiocarps that grow on dead wood, where the fungus feeds as a saprotroph. The basidiocarps are perennial, allowing them to grow very large under favourable circumstances. They are resupinate, measuring 30 centimetres (12 in) or more in length, though typically extending less than a centimetre from the surface of the wood. P. ellipsoideus produces distinct ellipsoidal spores, after which it is named, and unusual setae. These two features allow it to be readily differentiated microscopically from other, similar species. Chemical compounds isolated from the species include several steroidal compounds. These may have pharmacological applications, but further research is needed.

Rhodofomitopsis lilacinogilva is a species of bracket fungus in the family Fomitopsidaceae. Known primarily from Australia, it has also been recorded from Brazil and India. It is a white-rot fungus that grows on rotting eucalyptus wood. Its main identifying feature is the lilac colour of the pore surface on the underside of the fruit body.

Fibroporia is a genus of ten species of poroid crust fungi in the family Fomitopsidaceae. The genus contains species similar to those in genus Antrodia, but they are phylogenetically distinct.

Haploporus cylindrosporus is a species of poroid crust fungus in the family Polyporaceae. Found in China, it causes a white rot in decomposing angiosperm wood.

Fragiliporia is the sole genus in the fungus family Fragiliporiaceae. It contains the poroid crust fungus Fragiliporia fragilis, described as new to science by Chinese mycologists in 2014. The type specimen of this fungus was discovered growing on a rotting stump of alder in the Gaoligongshan National Nature Reserve in Yunnan. The specific epithet fragilis refers to the brittle fruit bodies of the fungus. Molecular phylogenetics shows that the fungus is in an isolated position in the Polyporales, distinct from the six previously identified clades in this order. In a later study (2017), Fragiliporia was recovered in a phylogenetically isolated position as sister to Candelabrochaete africana.

Buglossoporus eucalypticola is a species of poroid fungus in the family Fomitopsidaceae. It was described as a new species in 2016 by mycologists Mei-Ling Han, Bao-Kai Cui, and Yu-Cheng Dai. The type specimen was collected in the Danzhou Tropical Botanical Garden, in Danzhou, China. It was growing on a dead Eucalyptus tree. The fruit body has a fan-shaped or semicircular cap that projects up to 10 cm (3.9 in), 6.5 cm (2.6 in) wide, and 7 mm (0.3 in) thick at its base. The surface colour when fresh is peach to brownish orange, but when dry becomes clay-pink to cinnamon. The pore surface on the cap underside is initially white before becoming pinkish buff or clay-buff to dark brown. B. eucalypticola causes a brown rot in its host.

Fomitopsis subfeei is a species of polypore fungus in the family Fomitopsidaceae. Found in southern China, it was reported as new to science in 2014 by mycologists Mei-Ling Han and Bao-Kai Cui. Characteristics of the fungus include perennial, effused-reflexed to pileate fruit bodies, a concentrically grooved cap surface, and a pinkish-brown to vinaceous-brown pore surface on the cap underside. Microscopic characters include spindle-shaped cystidioles, and small, oblong-ellipsoid spores measuring 4–5 by 1.9–2.5 μm. The fungus causes a brown rot on gymnosperms.

Haploporus septatus is a species of poroid crust fungus in the family Polyporaceae. Found in China, it causes a white rot in decomposing angiosperm wood.

Cerarioporia is a fungal genus in the family Polyporaceae. It is a monotypic genus, containing the single species Cerarioporia cystidiata, a wood-decaying poroid crust fungus found in tropical China. Cerarioporia resembles fungi placed in the genus Antrodia, but can be distinguished by its waxy to resinous fruit bodies, and microscopically by the thick-walled, encrusted cystidia. Additionally, Cerarioporia causes a white rot, while Antrodia are brown-rot fungi.