The Austin United States Courthouse is a federal courthouse in downtown Austin, Texas. Built between 2009 and 2012, the building houses the Austin division of the United States District Court for the Western District of Texas and other federal judicial offices. It replaced the 1936 Austin U.S. Courthouse, which has since been transferred to Travis County to hold county judicial space.

Austin's previous federal courthouse was built in 1936 under the Public Works Administration. By the 2000s, Austin's population growth in the intervening decades had increased the court's caseload beyond what the courthouse could support. [2] In 2002 the General Services Administration retained architects to design a new, larger courthouse complex for Austin, [3] and in 2004 the GSA purchased a parcel of land in downtown Austin to eventually hold the facility. At the time, the plot held a derelict and incomplete structure that had once been intended as a computer processor design center for Intel, known locally after its abandonment as the "Intel Shell." The GSA demolished this structure in 2007 and indicated that it planned to begin building a new courthouse in 2009, to be completed in 2012. [4]

When the federal government enacted the American Recovery and Reinvestment Act of 2009 in response to the then-ongoing Great Recession, some of the economic stimulus funds were allocated for the construction of the new Austin courthouse. Construction contractors broke ground in September 2009, with plans to complete the building in three years on a budget of $96 million (equivalent to $116 million in 2020); [5] in fact, with modest delays and cost overages, the construction lasted for three years and three months and ultimately cost $123 million (equivalent to $139 million in 2020). The new courthouse was opened to the public on December 3, 2012, at which point all federal courts and offices in the old building were transferred to the new facility. [2]

The Austin U.S. Courthouse is an eight-story steel-and-concrete building clad with cream-colored limestone. The courthouse has a modernist design, with a stark cubic form and geometric external details. [6] The facility was designed by Atlanta-based architectural firm Mack Scogin Merrill Elam Architects and built by the White Construction Company, [3] with additional civil engineering by Page Southerland Page. [7]

The courthouse complex occupies the full city block between Fourth, Fifth, San Antonio and Nueces Streets, [2] immediately west of Republic Square. The exterior is covered in a mixture of banded limestone cladding, dark stainless steel, and narrow multi-story glazing. The rectangular form sits atop a concrete plinth set back 50 feet (15 m) from the streets, creating broad sidewalks on all sides. [3] The segment of San Antonio street between the courthouse and Republic Square is closed to vehicles, forming a wide plaza of concrete pavers, wooden benches and shade trees in front of the courthouse's principal, eastern facade. [2] The main entrance is in the northeast corner at ground level. [3]

The building contains eight courtrooms and ten judge's chambers, [2] with the major interior spaces characterized by wood paneling of warm-colored pecan and pervasive daylighting. [6] The courtrooms, jury chambers and public spaces hug the exterior walls, making use of the multi-story windows for light and external views. As much glass is used within the structure as in its external envelope, encouraging the diffusion of natural light into interior spaces and extending sight lines. The abundant use of glass and windows was meant to symbolically express the importance of transparency to the operation of the justice system and the public's confidence in it. [3]

The two-story ground-level lobby connects to an atrium which runs the length of the building from west to east, providing external views of the Austin skyline to the east and the Texas Hill Country to the west. [3] The lobby is separated from the jury assembly chamber by a 784-square-foot (72.8 m2) stained-glass mural by artist Clifford Ross, titled The Austin Wall. [8] The upper portion of the mural is a composite of brightly colored hanging panels, and the lower, black-and-white portion doubles as a set of doors. [3] The work is a representation of high-resolution photographs of the Texas Hill Country; it was developed using a combination of traditional stained-glass techniques (in cooperation with Franz Mayer & Co. of Munich) and digital printing. [9]

In 2016, the building's architecture received an award from the Justice Facilities Review from the American Institute of Architects. [10] It has been called an example of the "innovative public building projects that embrace contemporary design strategies and material approaches" that were enabled by the 1962 "Guiding Principles for Federal Architecture" directive. [11] In 2020, the Trump administration announced an executive order to rewrite national guidelines for federal architecture. A draft of the executive order, titled "Make Federal Buildings Great Again", cited the Austin United States Courthouse as an example of a federal building “influenced by Brutalism and Deconstructivism" and having “little aesthetic appeal.” [12]

Fountain Place is a 60-story late-modernist skyscraper in downtown Dallas, Texas. Standing at a structural height of 720 ft (220 m), it is the fifth-tallest building in Dallas, and the 15th-tallest in Texas. A new 45-story sibling tower, AMLI Fountain Place, has been built to its northwest on an adjacent lot. 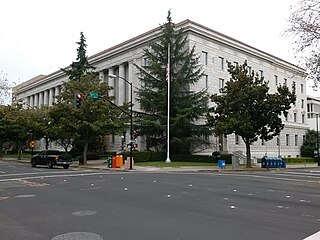 A federal building is a building housing local offices of various government departments and agencies in countries with a federal system, especially when the central government is referred to as the "federal government". In the United States, such structures are literally named "Federal Building", with this moniker displayed on the property.

The Edward A. Garmatz U.S. Courthouse is a courthouse of the United States District Court for the District of Maryland. 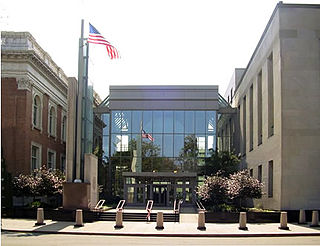 The Erie Federal Courthouse and Post Office, also known as Erie Federal Courthouse, in Erie, Pennsylvania, is a complex of buildings that serve as a courthouse of the United States District Court for the Western District of Pennsylvania, and house other federal functions. The main courthouse building was built in 1937 in Moderne architecture style. It served historically as a courthouse, as a post office, and as a government office building. It was listed on the National Register of Historic Places in 1993. By the late 1980s, the federal courts needed more space to effectively serve the public. To resolve the space shortage, the General Services Administration undertook a bold plan to purchase, restore, and adaptively use two adjacent historic buildings: the Main Library and the Isaac Baker & Son Clothing Store. The existing courthouse was rehabilitated and two additions were constructed. Each of the buildings in the complex is of a different architectural style. 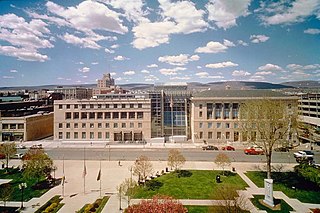 The William J. Nealon Federal Building and United States Courthouse is a courthouse of the United States District Court for the Middle District of Pennsylvania, located in Scranton, Pennsylvania. It was completed in 1931, and was listed on the National Register of Historic Places in 2018.

The Hipolito F. Garcia Federal Building and United States Courthouse is a historic courthouse, federal office, and post office building located in Downtown San Antonio in Bexar County in the U.S. state of Texas. It was formerly the U.S. Post Office, Federal Office Building and Courthouse. It is the courthouse for the United States Bankruptcy Court for the Western District of Texas. It holds a prominent location on Alamo Plaza, across from the Alamo. The building is listed on the National Register of Historic Places as San Antonio U.S. Post Office and Courthouse.

O. Henry Hall, formerly known as the U.S. Post Office and Federal Building, is a historic courthouse and post office in Austin, Texas. It is located within the Sixth Street Historic District in Downtown Austin. O. Henry Hall serves as the administrative headquarters of the Texas State University System (TSUS), and until 2017 served as the University of Texas System headquarters. 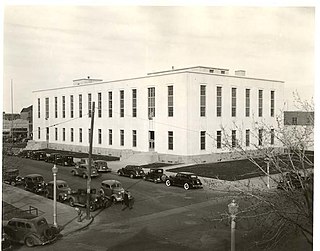 The J. Marvin Jones Federal Building and Mary Lou Robinson United States Courthouse, formerly known as the Amarillo U.S. Post Office and Courthouse, is a courthouse of the United States District Court for the Northern District of Texas built in Amarillo, Texas in 1939. It reflects Art Deco architecture and Moderne architecture, and was listed on the National Register of Historic Places in 2000. In addition to its continuous use as a courthouse, it has served as a post office, as a customhouse, and as a government office building.

Knowlton Hall, located in Columbus, Ohio, United States, is the current home for the three disciplines that comprise the Austin E. Knowlton School of Architecture (KSA) at The Ohio State University. The building was completed in 2004. The School of Architecture offers both undergraduate and graduate degrees in the fields of Architecture, Landscape Architecture, and City and Regional Planning. Knowlton Hall serves as the replacement for Ives Hall, the previous home of the school of architecture which was demolished in July 2002. The namesake of Knowlton Hall is Austin E. "Dutch" Knowlton. He graduated from The Ohio State University in 1931 with a Bachelor's in Architectural Engineering and provided a $10 million donation that spearheaded the funding for the creation of the building.

Charles Henry Page (1876–1957) was an American architect. He and his brother Louis Charles Page (1883–1934) founded the Texas firm of Page Brothers, Architects. The firm achieved great recognition when they were commissioned to design the Texas State Building for the 1904 Louisiana Purchase Exposition. The Pages also designed many courthouses and other buildings across Texas.

Merrill Elam is an American architect and educator based in Atlanta, Georgia. She is a principal with Mack Scogin in Mack Scogin Merrill Elam Architects where their work spans between buildings, interiors, planning, graphics and exhibition design, and research.

The Austin United States Courthouse is a historic former federal courthouse in downtown Austin, Texas. Built between 1935 and 1936, the building exemplifies Depression-era Moderne architecture, while Art Moderne and Art Deco finishes characterize the interior. It housed the Austin division of the United States District Court for the Western District of Texas and other judicial offices until 2012, when a new federal courthouse building was completed. Since 2016 the building has been owned by Travis County, which is renovating the facility to be used as county court space. The structure was added to the National Register of Historic Places in 2001. 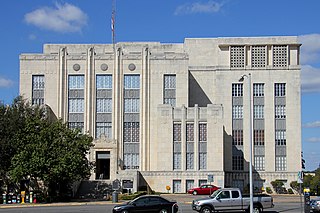 The Heman Marion Sweatt Travis County Courthouse is the county courthouse for Travis County, Texas. Located in downtown Austin, Texas, the courthouse holds civil and criminal trial courts and other functions of county government. The courthouse was built between 1930 and 1931 in the then-contemporary PWA Moderne style, and it was later expanded in 1958 and 1962.