Weedflower is a 2006 American children's historical novel by Cynthia Kadohata, the author of the award-winning Kira-Kira . The cover photography of the first edition is by Kamil Vojnar. The story is set in the United States during World War II and told from the perspective of twelve-year-old Japanese-American Sumiko. A 6.5 hours long audiobook version of Weedflower, read by Kimberly Farr, has been published. [1]

The story takes place in 1941. A classmate invites the main character Sumiko to a birthday party. Sumiko goes with a gift her uncle bought. However, she is not invited into the house because she is Japanese. When she returns home, she lies to her family so as not to disappoint them. Afterward, she tells the truth to her cousin Bull and her little brother Tak-Tak. [2]

To Sumiko's surprise, Japan bombs Hawaii's Pearl Harbor. The United States declares war on Japan. Sumiko and her family are forced to burn everything that may seem "disloyal" or suspicious, including Sumiko's dead parents' photo. Sumiko is kept home from school. Her grandfather is arrested for being first-generation Japanese (issei) and former principal of a Japanese school, and her uncle is arrested for being former president of a Japanese flower growing association. [3]

By the end of February, more than 2,000 people of Japanese ancestry, including American citizens, have been wrongfully arrested and relocated to prison camps. Gradually, all Japanese people, including Sumiko's family, have to leave their homes and belongings and go to camps. Sumiko has to leave her flower farm and move twice: from the San Carlos racetrack camp to Poston War Relocation Center in Poston, Arizona. [4]

When Sumiko arrives at her "permanent" camp in Poston, she meets many people, including Sachi, Mr. Moto, and a Native American boy called Frank, who eventually becomes her first real friend. Sumiko gardens as a pastime to relive her memories from her flower farm back in her Californian home. [5]

Several months later, the United States announces that the Japanese prisoners can go outside the camps to be employed. After initial reluctance, Sumiko leaves with her aunt to a sewing factory in Illinois. Her cousins, Bull and Ichiro, leave to fight for the army. After saying an abrupt, quick goodbye to Frank, she leaves the camp, and seeks out her future in Illinois. [6]

Critical reception has been mostly positive. Weedflower has received reviews from BookPage, Kirkus Reviews , and Publishers Weekly , and starred reviews from Booklist and School Library Journal . BookPage had stated that the novel provides a "well-rounded look at a painful moment in this country's history." [8] Booklist praised that the novel had "beautifully individualized characters". The School Library Journal said "the concise yet lyrical prose conveys [Sumiko's] story in a compelling narrative that will resonate with a wide audience". Publishers Weekly stated that "Kadohata clearly and eloquently conveys her heroine's mixture of shame, anger and courage". [9] Kirkus says that the story is "quietly powerful". [10] On the other hand, VOYA Magazine criticized that the book has "inconsistent and flat characterization and a narrative tendency to tell rather than to show, as well as an overabundance of exclamation points". [11]

Cynthia Kadohata is a Japanese American children's writer best known for her young adult novel Kira-Kira which won the Newbery Medal in 2005. She won the National Book Award for Young People's Literature in 2013 for The Thing About Luck.

Jill Neimark is an American writer. 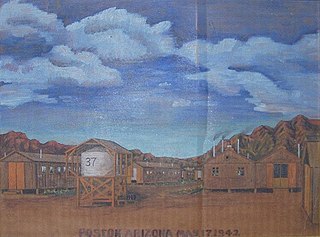 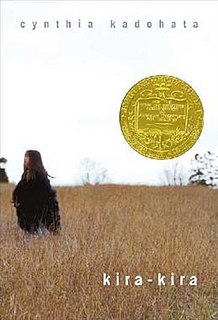 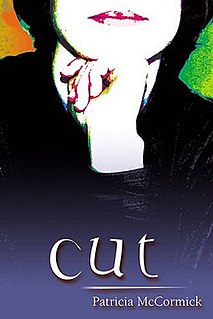 Cut is a 2000 novel by Patricia McCormick, targeted at young adults. In 2002 it was named one of the ALA's "Best Books for Young Adults" for that year.

Into the Wild is a fantasy novel written by Erin Hunter. The novel was published by HarperCollins in Canada and the United States in January 2003, and in the United Kingdom in February 2003. It is the first novel in the Warriors series. The book has been published in paperback, and e-book formats in twenty different languages. The story is about a young domestic cat named Rusty who leaves his human owners to join a group of forest-dwelling feral cats called ThunderClan, adopting a new name: Firepaw. He is trained to defend and hunt for the Clan, becomes embroiled in a murder and betrayal within the Clan, and, at the end of the book, receives his warrior name, Fireheart, after a battle with another Clan. He must face the evil Tigerclaw. The novel is written from the perspective of Fireheart.

Beatrice Gormley is an American writer who specializes in biographies for children. She has published a number of books with publishers such as Simon & Schuster and Scholastic.

A Mango-Shaped Space is a 2003 young adult novel by the American author Wendy Mass. A Mango-Shaped Space is Mass's fourth fiction novel. The book received the American Library Association Schneider Family Book Award in 2004. The novel has since been nominated for, and received, a number of other awards. The hand lettering on the cover is by Billy Kelly. The book is recommended for grades 5-8. A 7-hour long audiobook version, narrated by Danielle Ferland, has been produced.

Padma Tiruponithura Venkatraman, also known as T. V. Padma, is an Indian American author. Before she became an award-winning novelist, she spent time on and under the oceans, acted as chief scientist on research vessels, directed a school in England and led diversity efforts at a university.

Aranka Siegal is a writer, Holocaust survivor, and recipient of the Newbery Honor and Boston Globe-Horn Book Award, both awarded to her in 1982. She is the author of three books, the best known of which is Upon the Head of the Goat: A Childhood in Hungary 1930-1944, a memoir of her childhood in Hungary before her 12-month imprisonment in the Nazi concentration camps, Auschwitz – Birkenau and Bergen-Belsen. 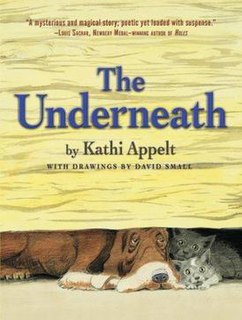 The Underneath is a children's book by Kathi Appelt. It tells the story of an abandoned cat who goes to live with a maltreated hound dog underneath a crooked old house in a bayou on the border between Louisiana and Texas. Published in 2008, The Underneath is a John Newbery Honor book, ALA Notable Children's Book and a National Book Award Finalist.

Brenda A. Ferber is an author of children's literature. She is an alumna of the University of Michigan. She won the Sydney Taylor Manuscript Award for her book Julia's Kitchen before it was published, and the Sydney Taylor Book Award following publication.

Life in Motion: An Unlikely Ballerina is an autobiography by Misty Copeland, written with Charisse Jones, published March 4, 2014 by Aladdin. In the book, Copeland discusses her history toward becoming the only African-American soloist with the American Ballet Theatre following a life in which she and her family lived in poverty.

Martine Leavitt is a Canadian American writer of young adult novels and a writing teacher.

Hannah Moskowitz is an American author of young adult and middle grade novels.

Darcy S. Pattison is an American writer of fiction and nonfiction children’s literature, a blogger, writing teacher and indie publisher. Her books have been translated into nine languages. Although she is best known for her work in children’s literature, she is also a writing teacher traveling across the nation presenting her Novel Revision Retreat. She has been featured as a writer and writing teacher in prestigious publications such as Writing Young Adult Fiction For Dummies, and 2012 Writer's Market. Pattison is also an independent publisher of ebooks for adults in the educational market. 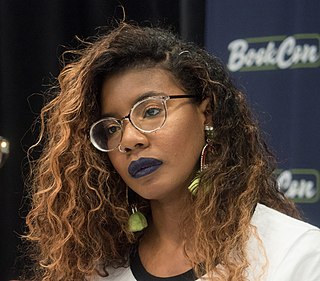 Andrea Nicole Livingstone, known as Nic Stone, is an American author of young adult fiction and middle grade fiction, best known for her debut novel Dear Martin and her Middle Grade debut, Clean Getaway. Her novels have been translated into six languages. 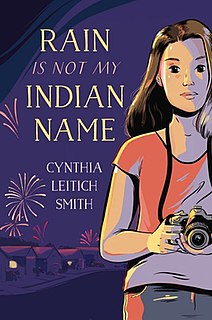 Rain Is Not My Indian Name is a middle-grade / young adult novel written by Cynthia Leitich Smith, illustrated by Lori Earley, and published June 19, 2001 by Heartdrum.