The Japanese American National Museum (全米日系人博物館, Zenbei Nikkeijin Hakubutsukan) is located in Los Angeles, California, and dedicated to preserving the history and culture of Japanese Americans. Founded in 1992, it is located in the Little Tokyo area near downtown. The museum is an affiliate within the Smithsonian Affiliations program. [1]

The museum covers more than 130 years of Japanese-American history, dating to the first Issei generation of immigrants. Its moving image archive contains over 100,000 feet (30,000 m) of 16 mm and 8 mm home movies made by and about Japanese Americans from the 1920s to the 1950s. It also contains artifacts, textiles, art, photographs, and oral histories of Japanese Americans. The Japanese American National Museum of Los Angeles and the Academy Film Archive collaborate to care for and provide access to home movies that document the Japanese-American experience. Established in 1992, the JANM Collection at the Academy Film Archive currently contains over 250 home movies and continues to grow. [2]

Activist Bruce Kaji and other notable Japanese-American individuals conceived of the idea of the museum. The community had become organized around gaining recognition of the injustice they had suffered from the federal government during World War II.

The museum was conceived as a way to preserve the positive aspects of their full history and culture in the United States. When it first opened in 1992, the museum was housed in the 1925 historic Hompa Hongwanji Buddhist Temple building. Irene Hirano served as its first executive director and later as president and CEO of the museum. [3] In January 1999, the National Museum opened its current 85,000-square-foot (7,900 m2) Pavilion, designed under the supervision of architect Gyo Obata, to the public. [4] The temple building was used by government officials in 1942 to process Japanese Americans for wartime confinement. It is now used for offices and storage.[ citation needed ]

In 1993 the museum was given hundreds of artifacts and letters from children in internment camps, which they had sent to San Diego librarian Clara Breed. The material was featured in an exhibit, "Dear Miss Breed": Letters from Camp. It is now part of the museum's permanent collection. [5]

In 1997, the Frank H. Watase Media Arts Center was established by Robert A. Nakamura and Karen L. Ishizuka, to develop new ways to document, preserve and make known the experience of Americans of Japanese ancestry. In 1999, the Manabi and Sumi Hirasaki National Resource Center (HNRC) was established to provide access to the museum's information and resources, both at the facility and online. It documents the life and culture of the Japanese Americans.

Akemi Kikumura Yano, author, [6] was the museum's first curator. She succeeded Irene Hirano as President and CEO from 2008 until 2011. During her tenure, on December 2010, the museum was awarded the National Medal for Museum and Library Service. [7]

Rev. Greg Kimura, an Episcopal priest, was appointed the president and CEO of the museum, serving between 2012 and 2016. [8] [9] [10] During his time the museum experienced an economic downturn as he looked to promote untraditional exhibits and let go core staff members. He resigned in May 2016 to pursue other work opportunities. [11]

In 2016, Ann Burroughs was announced to replace him as the new interim CEO [12] and was officially selected shortly thereafter. Burroughs spoke of her role: "I am committed to reinvigorating and finding new ways to advance the museum’s key values, emphasizing the importance of being vigilant about democracy and stressing the value of diversity in our world today." [13]

Actor George Takei serves as a member of the museum's board of trustees. He represented it as his charity during his time on The Celebrity Apprentice and during his appearance on The Newlywed Game . [14]

The museum's on-going exhibition is Common Ground: The Heart of Community, covering 130 years of Japanese American history, from the Issei and early immigration into the United States, World War II incarceration, to the present. [15]

Nisei Week is an annual festival celebrating Japanese American (JA) culture and history in Little Tokyo, Los Angeles. Nisei means 2nd generation in Japanese, describing the first American born Japanese, a group which the seven-day festival was originally meant to attract. Though named for the Nisei generation, Nisei Week is no longer targeted at Niseis, nor is the festival still contained within a week. Nisei Week Foundation president for 2006, Michelle Suzuki, described the festival as "the opportunity for people of all backgrounds to celebrate Japanese heritage and culture".

Clement Hanami is a Japanese-American artist. He grew up in the predominantly Latino, California suburb of East Los Angeles, just outside of downtown. His mother was a hibakusha, or atomic bomb survivor. His father was a World War II evacuee.

The Grateful Crane Ensemble is a non-profit 501(c)(3) Asian American theatre company based in Southern California, established in July, 2001.

Japanese Bolivians are Bolivians of Japanese ancestry or Japanese-born people who reside in Bolivia. 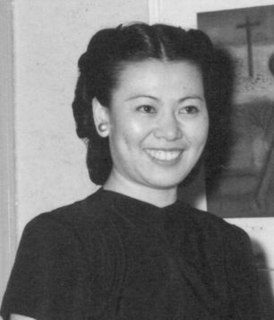 Miné Okubo was an American artist and writer. She is best known for her book Citizen 13660, a collection of 198 drawings and accompanying text chronicling her experiences in Japanese American internment camps during World War II. Soji Kashiwagi is a Sansei journalist, playwright and producer. He is the Executive Producer for the Grateful Crane Ensemble theatre company in Los Angeles. He has contributed to The Rafu Shimpo with his column, "Corner Store." He is the son of Nisei playwright Hiroshi Kashiwagi.

Gosei is a Japanese diasporic term used in countries, particularly in North America and in Latin America, to specify the great-great-grandchildren of Japanese immigrants (Issei). The children of Issei are Nisei. Sansei are the third generation, and their offspring are Yonsei. The children of at least one Yonsei parent are called Gosei.

Hannah Stouffer is an American artist, illustrator and art director living and working in Los Angeles, California. She became known through her art exhibitions, as well as for her contributions to the making of individual and collective art installations and murals worldwide. As a book author, her curatorial review of contemporary ceramics and its methods The New Age of Ceramics has received distinct attention in specialized art sources. Stouffer also acted as curator and designer of illuminated works Lust for Light, printed and distributed by Gingko Press. 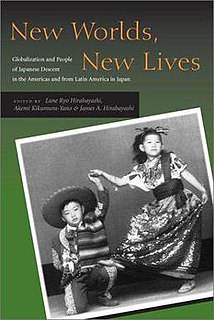 New Worlds, New Lives: Globalization and People of Japanese Descent in the Americas and from Latin America in Japan (ISBN 978-0804744621) is a 2002 academic book edited by Lane Ryo Hirabayashi, James A. Hirabayashi, and Akemi Kikumura-Yano and published by the Stanford University Press. The volume, edited by three Japanese American anthropologists, was produced by the Japanese American National Museum's International Nikkei Research Project. The same project produced the Encyclopedia of Japanese Descendants in the Americas: An Illustrated History of the Nikkei, and the two books are companion volumes.

George Hoshida was a Japanese American artist known for his drawings made during World War II, when he was incarcerated in three US internment camps and two Justice Department camps between 1942 and 1945. Nearly 300 of his works form the George Hoshida Collection, held and displayed by the Japanese American National Museum, founded in 1992 in Los Angeles, California.

Linda Nishio is a Japanese-American artist whose conceptual pieces focus on self-image and issues of representation, using photographs, text, performance, and film. She taught at the Otis College of Art and Design in Los Angeles.

Lisa Sasaki is the director of the Smithsonian Asian Pacific American Center. Prior to being appointed in November 2016, Sasaki was director of the Audience and Civic Engagement Center at the Oakland Museum of California and director of program development Japanese American National Museum. From 2001 to 2003, she was a museum curator at the Southeastern Colorado Heritage Center in Pueblo, Colorado, and assistant collections manager at the Denver Museum of Nature and Science.

Karen L. Ishizuka is an independent writer, curator, and documentary producer. She is a third-generation Japanese American and her family was incarcerated during World War II.

Margaret Garcia is a Chicana muralist, educator, and arts-advocate based in Los Angeles.