Last updated January 08, 2021
This article is about the former district. For the constituency, see West Somerset (UK Parliament constituency). For the town in South Africa, see Somerset West.
Non-metropolitan district in England

West Somerset was a local government district in the English county of Somerset. The council covered a largely rural area, with a population of 34,900 [1] in an area of 740 square kilometres (290 sq mi); [2] it was the least populous non-unitary district in England. According to figures released by the Office for National Statistics in 2009, the population of West Somerset has the oldest average age in the United Kingdom at 52. [3] The largest centres of population are the coastal towns of Minehead (population 10,000) and Watchet (4,400).

The council's administrative headquarters were located in the village of Williton, with an additional office in Minehead.

In September 2016, West Somerset and Taunton Deane councils agreed in principle to merge the districts into one (with one council) subject to consultation. [4] The new district would not be a unitary authority: it would still be part of the Somerset County Council area. [5] In March 2018 both councils voted in favour of the merger and it came into effect on 1 April 2019, with the first elections to the new council in May 2019. The new authority is known as Somerset West and Taunton Council. [6] [7] [8]

The district was formed on 1 April 1974, under the Local Government Act 1972, by a merger of the previous urban districts of Minehead and Watchet, along with Dulverton Rural District and Williton Rural District.

There were 33 Grade I listed buildings in West Somerset: the oldest are Culbone Church (one of the smallest churches in England, [9] and pre-Norman in origin) [10] and Tarr Steps, which some say originates in the Bronze Age, although others date them from around 1400. [11] Dunster has the greatest concentration of Grade I listed buildings including Dunster Castle, the Yarn Market, Gallox Bridge and Priory Church of St George. Other sites include manor houses such as Nettlecombe Court and Orchard Wyndham. The most recent buildings included in the list are Crowcombe Court which was completed in 1739 [12] and the Church of St John the Baptist in Carhampton which was rebuilt in 1863. [13] There are numerous religious structures in Somerset, with the largest number being Anglican parish churches, dating from Norman or medieval eras. Some of the churches are included in the Somerset towers, a collection of distinctive, mostly spireless Gothic church towers.

In 2012 financial difficulties at the council, including a £1 million reduction over three years, lead to plans to outsource most of the services provided to the population and make most of the staff redundant. [14] It is proposed that some services may be shared with Taunton Deane council. [15] In December 2012 the grant received from central government was increased by 0.9% meaning the council had £3.8million to spend on the provision of services. [16]

West Somerset benefits from one of the most scenic landscapes in England. Nearly two-thirds of the western land area of the district forms part of Exmoor National Park, designated in 1954, while on the eastern edge of the district are the Quantock Hills, which in 1956 became the first Area of Outstanding Natural Beauty created in the UK. Large areas of Exmoor and the Quantock Hills are also designated as Sites of Special Scientific Interest because of their value for wildlife.

The West Somerset Railway runs through most of the district, from Bishop's Lydeard in the south east to Minehead in the north west. Operated mainly as a tourist attraction, the railway runs mostly steam and some diesel locomotives.

County schools (those which are not independent) in the five non-metropolitan districts of the county are operated by Somerset County Council.

Watchet is a harbour town, civil parish and electoral ward in the English county of Somerset, with a population of 3,785. It is situated 15 miles (24 km) west of Bridgwater, 15 miles (24 km) north-west of Taunton, and 9 miles (14 km) east of Minehead. The town lies at the mouth of the Washford River on Bridgwater Bay, part of the Bristol Channel, and on the edge of Exmoor National Park. 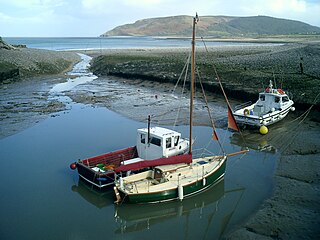 Porlock is a coastal village in Somerset, England, 5 miles (8 km) west of Minehead. It has a population of 1,440.

Williton is a large village and civil parish in Somerset, England, at the junction of the A39, A358 and B3191 roads, on the coast 2 miles (3.2 km) south of Watchet between Minehead, Bridgwater and Taunton in the Somerset West and Taunton district.

Brompton Regis is a village and civil parish in the Somerset West and Taunton district of Somerset, England about 5 miles (8.0 km) north-east of Dulverton. It is situated on the River Pulham in the Brendon Hills within the Exmoor National Park, close to Wimbleball Lake, a water supply reservoir constructed in the 1970s and completed in 1979. According to the 2011 census the village had a population of 449. The parish boundary is marked by the River Exe which is crossed by the medieval Chilly Bridge and Hele Bridge. The Haddeo is crossed by Bury Bridge.

West Quantoxhead is a small village and civil parish in the Somerset West and Taunton district of Somerset, England. It lies on the route of the Coleridge Way and on the A39 road at the foot of the Quantock Hills, 3 miles (5 km) from East Quantoxhead, 2.5 miles (4 km) from Williton and equidistant from Bridgwater and Taunton. The parish includes the hamlets of Weacombe and Lower Weacombe.

Stogumber is a village and civil parish in Somerset, England, on the eastern flank of the Brendon Hills. Besides Stogumber village itself, the parish includes the hamlets of Ashbeer, Capton, Escott, Higher Vexford, Kingswood, Lower Vellow, Lower Vexford, Preston, and Vellow. The village is on the route of the Samaritans Way South West.

Luxborough is a small village and civil parish located some 6 miles (9.7 km) south of Dunster, lying amongst the Brendon Hills and the Exmoor National Park in Somerset, England. It is divided into the hamlets of Churchtown, Kingsbridge and Pooltown, which lie within a mile of each other. Luxborough, 'Lolochesberie' in the Domesday Book, means 'stronghold or hill of a man called Lulluc'.

Luccombe or Luckham is a village and civil parish in the Exmoor National Park in the English county of Somerset. It at the foot of the moor's highest hill, the 1,750 feet (533 m) Dunkery Beacon, and is about one mile south of the A39 road between Porlock and Minehead. Administratively it forms part of the district of Somerset West and Taunton. The parish includes the hamlets of Stoke Pero and Horner, as well as the former hamlet of Wilmersham. 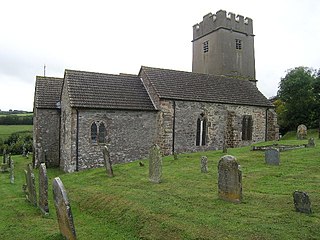 Cutcombe is a village and civil parish 9 miles (14 km) south of Minehead and north of Dulverton straddling the ridge between Exmoor and the Brendon Hills in Somerset. It has a population of 361.

East Quantoxhead is a village in the district of Somerset West and Taunton, 3 miles (5 km) from West Quantoxhead, 4 miles (6 km) east of Williton, and 13 miles (21 km) west of Bridgwater, within the Quantock Hills Area of Outstanding Natural Beauty in Somerset, England.

Timberscombe is a village and civil parish on the River Avill 2.5 miles (4 km) south-west of Dunster, and 5.5 miles (9 km) south of Minehead within the Exmoor National Park in Somerset, England. The parish includes the hamlet of Bickham.

Treborough is a small village and civil parish 7 miles (11 km) south of Dunster, lying amongst the Brendon Hills within the Exmoor National Park in the Somerset West and Taunton district of Somerset, England. 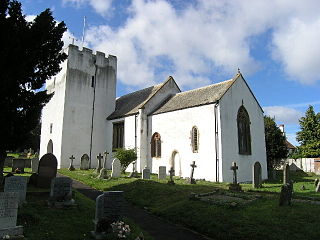 Withycombe is a village and civil parish 2.5 miles (4 km) south east of Dunster, and 5 miles (8 km) from Minehead within the Exmoor National Park in the Somerset West and Taunton district of Somerset, England. The parish includes the village of Rodhuish.

West Somerset is a local government district in the English county of Somerset. In the United Kingdom, the term listed building refers to a building or other structure officially designated as being of special architectural, historical or cultural significance; Grade I structures are those considered to be "buildings of exceptional interest". Listing was begun by a provision in the Town and Country Planning Act 1947. Once listed, severe restrictions are imposed on the modifications allowed to a building's structure or its fittings. In England, the authority for listing under the Planning Act 1990 rests with Historic England, a non-departmental public body sponsored by the Department for Digital, Culture, Media and Sport; local authorities have a responsibility to regulate and enforce the planning regulations.

The Hundred of Williton and Freemanners is one of the 40 historical Hundreds in the ceremonial county of Somerset, England, dating from before the Norman conquest during the Anglo-Saxon era although exact dates are unknown. Each hundred had a 'fyrd', which acted as the local defence force and a court which was responsible for the maintenance of the frankpledge system. They also formed a unit for the collection of taxes. The role of the hundred court was described in the Dooms (laws) of King Edgar. The name of the hundred was normally that of its meeting-place.