The Westin Building Exchange is a major telecommunications hub facility located downtown Seattle, Washington. The building was constructed in 1981 as the Westin Building, housing the corporate offices of Westin Hotels, which was then based in Seattle. It is also home to the Seattle Internet Exchange (SIX) and Pacific Northwest Gigapop's Pacific Wave Exchange. [7]

The facility has a pair of "Meet-me Rooms" on the 19th floor, which are used by telecommunication carriers and internet service providers to cross-connect their individual networks. These carriers situate their POPs within racks spread throughout the building, connecting back to the meet-me room via optical fiber cabling, facilitating interconnection with other carriers' infrastructure within the building. The Westin Building's meet-me room is the heart of the facility, where buyers and sellers of broadband services offer interconnectivity to their backbones and diverse services without the need to utilize telephone company provided interconnections. [8]

A colocation center or "carrier hotel", is a type of data centre where equipment, space, and bandwidth are available for rental to retail customers. Colocation facilities provide space, power, cooling, and physical security for the server, storage, and networking equipment of other firms and also connect them to a variety of telecommunications and network service providers with a minimum of cost and complexity.

In computer networking, peering is a voluntary interconnection of administratively separate Internet networks for the purpose of exchanging traffic between the "down-stream" users of each network. Peering is settlement-free, also known as "bill-and-keep," or "sender keeps all," meaning that neither party pays the other in association with the exchange of traffic; instead, each derives and retains revenue from its own customers. 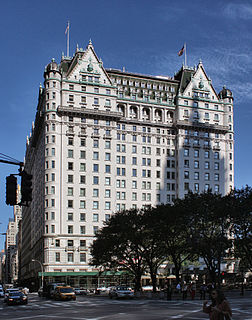 The Plaza Hotel is a luxury hotel and condominium apartment building in Midtown Manhattan in New York City. It is on the western side of Grand Army Plaza, just west of Fifth Avenue, between 58th Street and Central Park South. The Plaza Hotel is named for Grand Army Plaza, which in turn is at the southeastern corner of Central Park. Its primary address is at 768 Fifth Avenue, though the residential entrance is at One Central Park South.

Switch and Data Facilities Company, Inc. was a U.S. public corporation that provided network-neutral data centers and Internet exchange services to network-centric businesses. Switch and Data was acquired by Equinix in 2010.

The Tour de la Bourse is a 48-storey skyscraper in Montreal, Quebec, Canada. It is located at the intersection of Victoria Square and Saint Jacques Street in the International Quarter. It is connected by the underground city to the Square-Victoria-OACI Metro Station.

A "meet-me room" (MMR) is a place within a colocation centre where telecommunications companies can physically connect to one another and exchange data without incurring local loop fees. Services provided across connections in an MMR may be voice circuits, data circuits, or Internet protocol traffic.

Tower 55 is a 15-story building at the corner of South Market Street and Post Street in downtown San Jose, California. Built in 1985 as the Market Post Tower, it was designed to provide a mix of office and retail space. When first built, the building was controversial due to its gold-colored glass exterior, which produced high light and heat reflection. In its early years, the owners struggled financially with the property and were forced to put it up for sale in 1987. While the intended tenants did not materialize, the building proved popular with telecom carriers as an Internet exchange center, with MAE-West on the 13th floor, one of the oldest and most well known Internet exchanges. Many carriers maintain collocation space in the building to support their interconnections through MAE-West as well as direct interconnections.

Equinix, Inc. is an American multinational company headquartered in Redwood City, California, that specializes in Internet connection and data centers. The company is a leader in global colocation data center market share, with 210 data centers in 25 countries on five continents.

Westin Hotels & Resorts is an American upscale hotel chain owned by Marriott International. As of June 30, 2020, the Westin Brand has 226 properties with 82,608 rooms in multiple countries in addition to 58 hotels with 15,741 rooms in the pipeline.

Lincoln Square is a mixed-use urban development in Bellevue, Washington, owned by prominent local developer Kemper Freeman. Lincoln Square, located along Bellevue Way between NE 6th and NE 8th streets, consists of two skyscrapers with retail and restaurant space, and a movie theater; and a 148-room residential tower and 337-room luxury hotel ; and underground parking. The development constitutes part of "The Bellevue Collection", which consists of Freeman's properties in downtown Bellevue alongside Bellevue Place and Bellevue Square. The office tower is leased to Eddie Bauer's corporate headquarters and Microsoft; the hotel is occupied by Westin Hotels & Resorts. 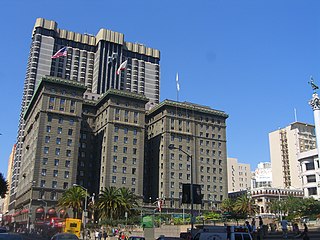 The Westin St. Francis, formerly known as St. Francis Hotel, is a hotel located on Powell and Geary Streets on Union Square, San Francisco, California. The two 12-story south wings of the hotel were built in 1904, and the double-width north wing was completed in 1913, initially as apartments for permanent guests. This section is referred to as the Landmark Building on the hotel's website. The 32-story, 120 m (390 ft) tower to the rear, referred to as the Tower Building, which was completed in 1972, features exterior glass elevators that offer panoramic views of the bay and the square below, making the St. Francis one of the largest hotels in the city, with more than 1,254 rooms and suites.

The Westin Seattle is a twin-tower highrise hotel in Seattle, Washington.

One Wilshire is an office building located at the junction of Wilshire Boulevard and South Grand Avenue in downtown Los Angeles. Notwithstanding the building's name, its actual address is 624 S. Grand Avenue. Built in 1966, the thirty story high-rise was designed by Skidmore, Owings and Merrill, and for its first decades in existence it was used almost exclusively by law firms. In the early 1990s it began housing largely telecommunications companies, and in 1992 One Wilshire underwent a major renovation, with the improvements largely related to telecommunication network upgrades. Around this time a large meet-me room was constructed on the fourth floor, and in 2008 Wired claimed that One Wilshire had "the world's most densely populated Meet-Me room", with around 260 ISPs with interconnected networks.

Colliers is a Canada-based diversified professional services and investment management company with approximately 15,000 employees in more than 400 offices in 68 countries.

Lexent Metro Connect was a New York City based neutral telecommunications provider that owned, operated, built and maintained its own dark fiber network in New York, Northern New Jersey, and surrounding areas. Based in New York City, Lexent provided services in the boroughs of Manhattan, the Bronx, Queens, and Brooklyn, as well as in Northern New Jersey. It had 150 fiber route miles and served over 200 commercial buildings.

Interxion is a European provider of carrier and cloud-neutral colocation data centre services. Founded in 1998 in the Netherlands, the firm was publicly listed on the New York Stock Exchange from 28 January 2011 until its acquisition by Digital Realty in March 2020. Interxion is headquartered in Schiphol-Rijk, the Netherlands, and delivers its services through 53 data centres in 11 European countries located in major metropolitan areas, including Dublin, London, Frankfurt, Paris, Amsterdam and Madrid, the 6 main data centre markets in Europe, as well as Marseille, Interxion’s Internet Gateway.

Union Square is a skyscraper complex at Sixth Avenue between Union and University Streets in Downtown Seattle, Washington, adjacent to Freeway Park. It consists of two skyscrapers built in the 1980s and primarily used for office space. The entire complex features a 1,100-stall parking garage, a courtyard, a retail plaza spanning three stories and an underground pedestrian concourse that connects with the Fifth Avenue Theater and Rainier Square. Both structures were awarded LEED certification in 2009 and eventually received LEED Platinum certification 6 years later as a result of reduced annual energy consumption by 40 percent through recent renovations. The entire complex is currently managed by Washington Holdings, a real estate firm also known as Union Square LLC which is based in Seattle.