Woodlands Wellington Football Club was a professional football club which played in the S.League, the top division of football in Singapore. They are based in Woodlands at the 4,300 seater Woodlands Stadium, where they have played since their establishment.

Woodlands Wellington FC are known for being the only non-Premier League team to be inducted into the S.League in its inaugural year in 1996.

Woodlands Wellington FC's honours include winning the inaugural Singapore League Cup in 2007, defeating Sengkang Punggol FC 4–0 in the final. They also finished runners-up in the Singapore FA Cup in 1997, and also in the Singapore Cup in 2005 and 2008 and won the President's Centennial Cup in 1998, a cup competition organized by the Philippine Football Federation to celebrate the centennial of Philippine Independence by defeating Hong Kong Rangers FC 2–1 in the final in Bacolod.

Their best finish in the S-League came in the 1996 Tiger Beer Series where they were runners-up. They have also achieved 3rd place in 1997 and 2005.

Woodlands Wellington was founded as Wellington Football Club in 1988 as a splinter group of Delhi Juniors (a team of Singaporean football enthusiasts, dating back to the 1940s, that were among the pioneers of football in Singapore). Despite their name, the team did not originate from New Zealand as many believe. Instead, the name stems from the Deptford Ground located on Wellington Road in Sembawang where the team started playing football in 1988.

In 1991, they participated in the Sembawang Group League and National Island-Wide League, winning as champions in both competitions and setting a national record by beating Seletar Football Club by a 27-goal margin. This was one of the biggest wins the club had ever achieved, as they beat their opponents 28 – 1 at the Woodlands Stadium on 17 November 1991. Amalar Louis scored a record 12 goals in that match. [1]

The following year, Wellington FC joined the Singapore National Football League in Division 2, from which they were promoted as champions in 1994. The following season they finished first in Division 1 (going unbeaten for 24 matches) and were runners-up in the FA Cup. [2]

Following their admission to the S.League, Wellington FC's founder, R. Vengadasalam, was appointed as the Team Manager of Woodlands Wellington and Bandai [5] were announced as a sponsor in their maiden season in the S.League. Following this, they signed Jan Janostak, Joe Caleta and Ervin Boban, from the M-League, as well as Singapore national players Borhan Abu Samah, Tamil Marren, Zakaria Awang, from England Notts County legend Darren Davis (footballer) and Croatian goalkeeper Sandro Radun, who played for the Singapore FA in 1992. Woodlands Wellington played to capacity crowds, including their pre-season friendlies. [6]

Woodlands won the President's Centennial Cup in 1998, a cup competition organized by the Philippine Football Federation to celebrate the centennial of Philippine Independence, beating Sembawang Rangers 4–2 in the semi-final and Hong Kong Rangers FC 2–1 at the Negros Occidental Sports Complex in the final in Bacolod with both goals from Razali Ahmad. [7]

While they enjoyed a relatively successful period throughout the late nineties, Woodlands finished last in the 2001 S.League season, prompting them to sign Singapore internationals Zulkarnaen Zainal, Goh Tat Chuan and A. Siva Kumar. [8] The transfers of Goh and Siva Kumar were particularly controversial as Woodlands and Jurong were well-known rivals in the league.

Woodlands Wellington made the headlines in the 2007 S.League season for a walkout by the entire Woodlands squad in a match against Tampines Rovers as a protest to the decisions made against them by referee P. Pandian. Woodlands were fined $30,000 for the incident and had six points docked. [9] Tampines coach Vorawan Chitavanich was reported as saying "I spoke to their coach just a little while ago and he said that they acted on the instructions of their club chairman." [10]

Reported withdrawal from the S. League

A report by The New Paper on 22 November 2012 suggested that Woodlands may be in financial trouble and could be the second club to sit out the 2013 S.League after Gombak United has announced earlier that it would not be taking part in the league in 2013. [11] This sparked off a supporter-driven "Save Woodlands" awareness campaign on the same day. [12] The club held an open meeting with the supporters and press at Woodlands Stadium later that evening and quashed the report. Team manager, Matthew Tay, also said that the club was already preparing a pre-season tour of Malaysia, and that the club would be signing players and would also be aiming for a minimum 8th spot in the table this season. [13] [14] [15]

In November 2014, it was announced that Woodlands Wellington and Hougang United will merge for the 2015 season and a new club name will be used. [16] [17]

However, the merge never occurred and the club now plays in 2016 Island Wide League. The club plans to re-join S-League in the future. [18]

Woodlands Stadium is currently the home ground of Woodlands Wellington, and used mostly for football matches. Apart from being used for competitive matches, the pitch is also utilised by the club for their training sessions as well.

Woodlands Stadium started off with a total seating capacity of 1,600 when it was first constructed. Following the inauguration of the S.League in 1996, where the stadium was assigned as the home ground of Woodlands Wellington FC, the stadium capacity was upgraded to 4,300. This includes a 2,000 seater grandstand, a 1,000 seater semi-permanent stand opposite the grandstand and a 1,300 seater portable stands at each end of the pitch.

In the ensuing years, yellow was employed as the main colour of choice for the home kit and this has become the traditional colour for the club.

The youth academy of Woodlands is the Centre of Excellence, which develops promising young players and grooms them for the future.

The supporters' club of Woodlands Wellington Football Club are known as The Black Sheep. [22] They can be seen at both home and away games dressed in the club's official colours of yellow and blue and are usually seated behind the Rams' dugout. Since its inception, The Black Sheep have been using the warcry "Never Surrender!" to rally their players on. [23] [24]

The Singapore Premier League is a men's professional association football league sanctioned by the Football Association of Singapore, which represents the sport's highest level in Singapore.

Goh Tat Chuan is a former Singapore football player. A midfielder, he spent most of his time at Woodlands Wellington FC and was the 10th captain of the club. Goh is currently the record holder for the most appearances for Woodlands with 138 appearances. 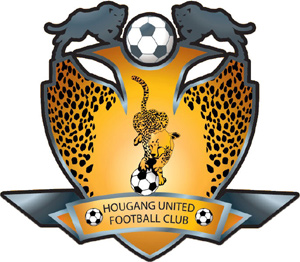 Jang Jo-yoon, alternatively spelt as Chang Jo-yoon, is a retired South Korean footballer who plays as a Forward. 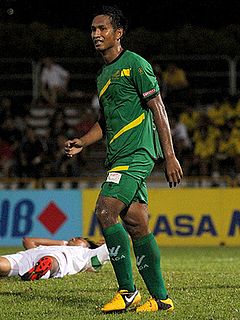 Muhammad Shahril bin Mohamad Alias is a professional football player who plays for the Woodlands Wellington in the S.League.

Yazid Yasin is a retired Singapore footballer who played most of his career in S.League

The 2011 S.League was the 16th season of the S.League, the top professional football league in Singapore. Tampines Rovers FC won their third title. As in the previous season the S.League was not allowed to send a team to the AFC Champions League because of the participation of a foreign team in the league.

Salim Moin was a former Singapore national footballer and also formerly the head coach of S.League club Hougang United in the S.League.

The 2012 season is Woodlands Wellington's 17th competitive and consecutive season in the top flight of Singapore football and 25th year in existence as a football club. 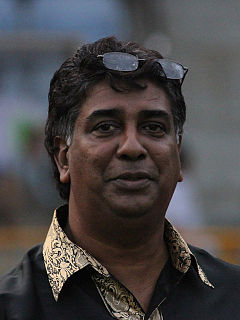 R. Vengadasalam, commonly known as Venga, is a Singaporean football official who is the founder and current president of Woodlands Lions FC, a youth-developmental football club and associate member of the FAS, since the club's inception in 2018.

Admiralty Football Club, also commonly known as Admiralty FC, is a football club which plays in the Singapore National Football League, the second tier of football in Singapore. By securing first position in the 2012 Division Two, the Wolves were promoted to the NFL Division 1 in the 2013 season.

The 2012 Singapore League Cup was held between 26 July to 11 August 2012. Traditionally held as a knockout competition, the 2012 edition saw a new format where four groups of three teams battled it out for a place in the semi-finals. In addition, the four teams that finished third in their respective groups played in a separate Plate Competition consisting of two semi-finals and a final.

The 2013 S.League season is Woodlands Wellington's 18th competitive and consecutive season in the top flight of Singapore football and 26th year in existence as a football club.

The 2013 Singapore League Cup is a cup competition played in the month of June 2013.

The 2014 S.League was the 19th season since the establishment of the S.League, the top-flight Singaporean professional league for association football clubs. The league was also known as the Great Eastern Yeo's S.League due to sponsorship reasons. Tampines Rovers were the defending champions.