The exact formats and numbers of levels changed several times, the last time in 1988, when the four inter-republic groups were introduced at third level. The groups were called that way because unlike the fourth tier groups they did not correspond territorially to Yugoslavia's six federal republics.

The following table shows the structure as it was employed in the 1990–91 season, the last season before Slovenian and Croatian clubs departed after their countries declared independence. Bosnian and Macedonian clubs also abandoned the system during and after the following 1991–92 season. Serbia and Montenegro stayed unified as FR Yugoslavia and continued competing together all the way until 2006. The league system structure was kept similar, with the 4 Inter-Republic leagues being replaced by 4 leagues distributed geographically: Montenegrin League, Serbian League East, Serbian League North and Serbian League West. 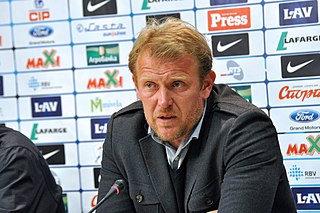 Robert Prosinečki is a Croatian professional football manager and former football midfielder who is currently the manager of Süper Lig club Kayserispor. He is one of the few footballers to have played for both the Spanish rival clubs Real Madrid and FC Barcelona.

Fudbalski klub Obilić, commonly known as Obilić Belgrade or simply Obilić, was a Serbian football club based in Vračar, a neighbourhood of Belgrade. Named after medieval Serbian hero Miloš Obilić, a legendary 14th-century knight, the club currently competes in the Third Belgrade league - Group A. 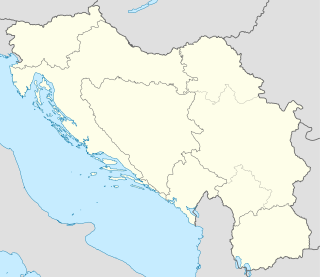 Fudbalski klub Sutjeska Foča is a professional association football club based in the town of Foča that is situated in southern Bosnia and Herzegovina.

The 1991–92 Football Cup of Yugoslavia was the national knock-out football competition in the Socialist Federal Republic of Yugoslavia, which was held during the breakup of the state.

The Serbian football league system is a series of interconnected leagues for association football clubs in Serbia. The system has a hierarchical format with promotion and relegation between leagues at different levels.