Compulsions and addictions are intertwined and reward is one major distinction between an addiction and a compulsion (as it is experienced in obsessive-compulsive disorder). An addiction is, by definition, a form of compulsion, and both addictions and compulsions involve operant reinforcement. In addition, dopamine is released in the brain's reward system and is a motive for behaviour (i.e. the compulsions in addiction development through positive reinforcement). [7]

In contrast, someone who experiences a compulsion as part of obsessive-compulsive disorder may not perceive anything rewarding from acting on the compulsion. Often, it is a way of dealing with the obsessive part of the disorder, resulting in a feeling of relief (i.e., compulsions may also arise through negative reinforcement). [8]

Deep brain stimulation to the nucleus accumbens, a region in the brain involved heavily in addiction and reinforcement learning, has proven to be an effective treatment of obsessive compulsive disorder. [9]

The study indicates that there is a difference in personality traits for addictive behaviors that is associated with distinctive online tasks. [10] Namely, higher neuroticism and less conscientiousness have a correlation with internet addiction overall; [10] less conscientiousness and low openness to experience are connected with addiction to video games, [10] neuroticism and extraversion were linked with social networking addiction. [10]

Development of addictive behaviors in adolescents

The expansion of addictive behaviors in adolescence contains different phases. [11] In the first stage, one has the ability to control appetitive motivational tendencies, but they do not have the motivation to do so. [11] Once enough drug or alcohol-related problems emerged, individuals tend to have more encouragement to adjust appetitive desires. [11] In this circumstance, personal willingness and ability are hindered. [11] there are a more powerful appetitive stimulation and a weaker ability to balance this response desire. [11] The shortcoming between these aspects are the essence of addictive behaviors in adolescents. [11]

Addictions might give an individual a sense of power, confidence, endorsement, or other feelings that they might not attain in their real life. [12] Psychotherapy is a way to help people distinguish rough feelings and distress factors to adapt and grow. [12] People that have trouble with addictive behaviors are unlikely to regulate those actions by themselves unless someone leads them to work on addressing the root of their addictive behaviors, such as trauma, stress, anxiety, and so on. [12] There are a lot of types of therapy that can help people address the addictive behaviors which they want to alter. [12] An individual who has an addictive behavior would most likely have the biggest advantage from consulting with a therapist that is recognized by the medical institution or organization to be the expert in the particular area of addiction or compulsion in terms of potential causes. [12]

Pornography addiction is an addiction model of compulsive sexual activity with concurrent use of pornographic material, despite negative consequences to one's physical, mental, social, or financial well-being. ICD-11 has recently recognized compulsive sexual behavior (CSBD) as an "impulsive control disorder". CSBD is not an addiction and should not be conflated with sex addiction. The DSM-5 however, does not classify compulsive pornography consumption as a mental disorder or a behavioral addiction. 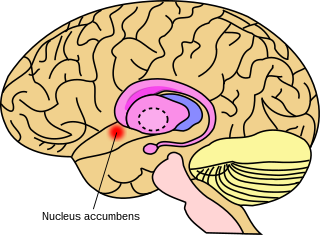 Drug tolerance or drug insensitivity is a pharmacological concept describing subjects' reduced reaction to a drug following its repeated use. Increasing its dosage may re-amplify the drug's effects; however, this may accelerate tolerance, further reducing the drug's effects. Drug tolerance is indicative of drug use but is not necessarily associated with drug dependence or addiction. The process of tolerance development is reversible and can involve both physiological factors and psychological factors. 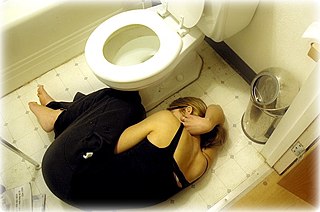 Alcohol dependence is a previous psychiatric diagnosis in which an individual is physically or psychologically dependent upon alcohol.

Problem gambling or ludomania is repetitive gambling behavior despite harm and negative consequences. Problem gambling may be diagnosed as a mental disorder according to DSM-5 if certain diagnostic criteria are met. Pathological gambling is a common disorder that is associated with both social and family costs.

Neuropharmacology is the study of how drugs affect cellular function in the nervous system, and the neural mechanisms through which they influence behavior. There are two main branches of neuropharmacology: behavioral and molecular. Behavioral neuropharmacology focuses on the study of how drugs affect human behavior (neuropsychopharmacology), including the study of how drug dependence and addiction affect the human brain. Molecular neuropharmacology involves the study of neurons and their neurochemical interactions, with the overall goal of developing drugs that have beneficial effects on neurological function. Both of these fields are closely connected, since both are concerned with the interactions of neurotransmitters, neuropeptides, neurohormones, neuromodulators, enzymes, second messengers, co-transporters, ion channels, and receptor proteins in the central and peripheral nervous systems. Studying these interactions, researchers are developing drugs to treat many different neurological disorders, including pain, neurodegenerative diseases such as Parkinson's disease and Alzheimer's disease, psychological disorders, addiction, and many others.

Substance dependence, also known as drug dependence, is a biopsychological situation where-by an individual's functionality is dependent on the necessitated re-consumption of a psychoactive substance, because of an adaptive state that has developed within the individual from psychoactive substance consumption, which results in the experience of withdrawal, which necessitates the re-consumption of the drug. A drug addiction, a distinct concept from substance dependence, is defined as compulsive, out-of-control drug use, despite negative consequences. An addictive drug is a drug which is both rewarding and reinforcing. ΔFosB, a gene transcription factor, is now known to be a critical component and common factor in the development of virtually all forms of behavioral and drug addictions, but not dependence.

Sensitization is a non-associative learning process in which repeated administration of a stimulus results in the progressive amplification of a response. Sensitization often is characterized by an enhancement of response to a whole class of stimuli in addition to the one that is repeated. For example, repetition of a painful stimulus may make one more responsive to a loud noise.

Reverse tolerance or drug sensitization is a pharmacological phenomenon describing subjects' increased reaction to a drug following its repeated use. Not all drugs are subject to reverse tolerance. 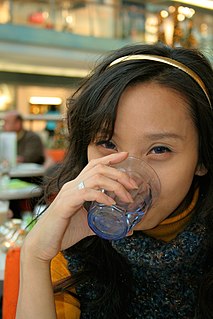 The reward system is a group of neural structures responsible for incentive salience, associative learning, and positively-valenced emotions, particularly ones involving pleasure as a core component. Reward is the attractive and motivational property of a stimulus that induces appetitive behavior, also known as approach behavior, and consummatory behavior. A rewarding stimulus has been described as "any stimulus, object, event, activity, or situation that has the potential to make us approach and consume it is by definition a reward". In operant conditioning, rewarding stimuli function as positive reinforcers; however, the converse statement also holds true: positive reinforcers are rewarding.

Protein fosB, also known as FosB and G0/G1 switch regulatory protein 3 (G0S3), is a protein that in humans is encoded by the FBJ murine osteosarcoma viral oncogene homolog B (FOSB) gene.

Behavioral addiction is a form of addiction that involves a compulsion to engage in a rewarding non-substance-related behavior – sometimes called a natural reward – despite any negative consequences to the person's physical, mental, social or financial well-being. Addiction canonically refers to substance abuse; however, the term's connotation has been expanded to include behaviors that may lead to a reward since the 1990s. A gene transcription factor known as ΔFosB has been identified as a necessary common factor involved in both behavioral and drug addictions, which are associated with the same set of neural adaptations in the reward system.

Addiction is a neuropsychological disorder characterized by persistent use of a drug despite substantial harm and adverse consequences. Repetitive drug use often alters brain function in ways that perpetuate craving and undermine self-control. This phenomenon—drugs reshaping brain function—has led to an understanding of addiction as a brain disorder with a complex variety of neurobiological and psychosocial factors that are implicated in its development. Classic hallmarks of addiction include compulsive engagement in rewarding stimuli, preoccupation with substances or behavior, and continued use despite adverse consequences. Habits and patterns associated with addiction are typically characterized by immediate gratification, coupled with delayed deleterious effects.

Exercise addiction is a state characterized by a compulsive engagement in any form of physical exercise, despite negative consequences. While regular exercise is generally a healthy activity, exercise addiction generally involves performing excessive amounts of exercise to the detriment of physical health, spending too much time exercising to the detriment of personal and professional life, and exercising regardless of physical injury. It may also involve a state of dependence upon regular exercise which involves the occurrence of severe withdrawal symptoms when the individual is unable to exercise. Differentiating between addictive and healthy exercise behaviors is difficult but there are key factors in determining which category a person may fall into. Exercise addiction shows a high comorbidity with eating disorders.