Last updated December 29, 2019
Title held by Spanish nobles in service of their respective kings during the Middle Ages

Adelantados were granted directly by the monarch the right to become governors and justices of a specific region, which they were charged with conquering, in exchange for funding and organizing the initial explorations, settlements and pacification of the target area on behalf of the Crown of Castile. These areas were usually outside the jurisdiction of an existing audiencia or viceroy, and adelantados were authorized to communicate directly with the Council of the Indies. [4]

The term has its origins in the reconquista . The term comes from the phrase por adelantado (Spanish: "in advance", although translations stating "one who goes before" and "the forward man" are also found). According to the Siete Partidas the office of adelantado was the equivalent of the Roman Praefectus urbi (Latin).

The earliest definitely known adelantado was appointed by Alfonso X in 1253 in the recently conquered territory of "La Frontera" (Andalusia). However the office had precedents in the duties and rights held by some officers of the Navarrese dynasty of Castile and León, and Álvar Fáñez or Fortún Sánchez in the Ebro valley performed similar services in detached territories beyond the frontier. It was during this time that the Siete Partidas, commissioned by Alfonso X, more precisely identified the powers of the office. That law code created the position of an adelantado mayor, who was at the same time an intermediary appellate judge, located in the judicial hierarchy between local justices and the king's court, and an executive officer, who as a direct representative of the king, was charged with implementing royal orders in his assigned area. Most appointees were from the upper nobility or the royal family. After its success in Andalusia, the institution was introduced in the northern areas of the peninsula, merging with, and becoming indistinguishable from an older judicial office, the Royal Merinos.

Beyond the peninsula the term adelantado was granted to Alonso Fernández de Lugo in the conquest of the Canary Islands and was confirmed to members of his family. The term became modified over time. During the colonization of the Americas and Spanish East Indies (Asia), each charter specified different powers to each adelantado, sometimes in a vague manner, which often lead to confusion, as in the case between Juan de Oñate and the Viceroy of New Spain. [5] The title was also granted both as an inheritable title and one that lasted for one life only. With the publication of the Ordinances Concerning Discoveries (Ordenanzas de descubrimientos, nueva población y pacificación de las Indias) in 1573, the attributes of adelantados became regularized, although the title was granted with much less frequency after this date, especially since the institutions of audiencias, governors and viceroys had been developed. [6] Nevertheless, the Ordinances are useful because they illustrate the faculties adelantados often had. The Ordinances established that adelantados, in their capacity as governors and justices of the new territories, had the right to hear civil and criminal cases in appeal, to name the regidores and employees of the cabildos of any towns founded, to name interim treasury officials, to issue ordinances on the use of land and mines, to establish districts, and to organize militias and name their captains.

The first use of the title adelantado in the Americas was by Bartolomeo Columbus, brother of Christopher Columbus, who governed Hispaniola under this title during his brother's absence from 1494 to 1498. It was later inherited by Diego Colón after much litigation. Other conquistadors who were granted the title include: 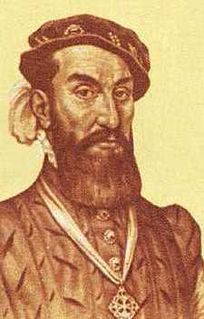 Alonso Fernández de Lugo was a Spanish military man, conquistador, city founder, and administrator. He conquered the islands of La Palma (1492–1493) and Tenerife (1494–1496) for the Castilian Crown; they were the last of the Canary Islands to be conquered by Europeans. He was also the founder of the towns of San Cristóbal de La Laguna, Santa Cruz de Tenerife and Santa Cruz de La Palma. One biographer has written that his personality was a “terrible mixture of cruelty and ambition or greed, on one part, and on the other a great capacity and sense for imposing order and government on conquered lands,” a trait found in the conquistadors of the New World.

Pedro Antonio Fernández de Castro, 10th Count of Lemos was a Spanish nobleman who was Viceroy of Peru from 1667 until his death.

Pedro Fernández de Lugo (1475–1536) was the second adelantado of the Canary Islands and governor of Tenerife and La Palma, a title confirmed again by Charles I of Spain, in Barcelona, on August 17, 1519. Pedro Fernández de Lugo was the son of Alonso Fernández de Lugo. Born in Seville, Pedro arrived at Gran Canaria as a young child and later accompanied his father to expeditions to Barbary. In 1509, his father gave him some of the rights and powers over the coast of Africa that he had acquired in 1499. Pedro commanded the tower of Santa Cruz de Mar Pequeña and participated in expeditions against the Berbers alongside the Portuguese.

Juan Vázquez de Coronado y Anaya was a Spanish conquistador, remembered especially for his role in the colonization of Costa Rica, in Central America, where he gained a reputation for fairness, effective administration, and good relationships with the native population. He was a nephew of Francisco Vázquez de Coronado y Luján, who explored the southwestern United States between 1540 and 1542.

The House of Lara is a noble family from the medieval Kingdom of Castile. Two of its branches, those from the Duke of Nájera and from the Marquess of Aguilar de Campoo were considered Grandees of Spain. The Lara family gained numerous territories in Castile, León, Andalucía, and Galicia and members of the family moved throughout the former Spanish colonies, establishing branches as far away as the Philippines and Argentina. The House of Lara were most prominent in the history of Castile and León from the 11th to the 14th century. For example, Álvaro Núñez de Lara served as regent for Henry I of Castile. They were dispossessed of much of their land by Peter the Cruel, but most was returned by Henry II. 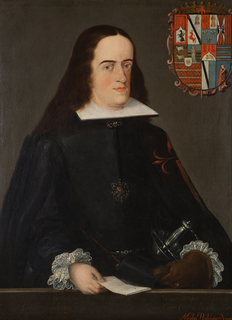 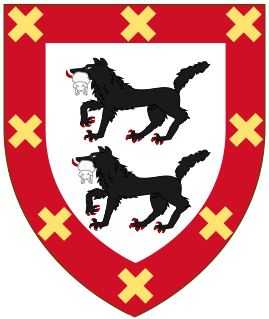 Lope Díaz II de Haro "Cabeza Brava" was a Spanish noble of the House of Haro, the sixth Lord of Biscay, and founder of the municipality of Plentzia. He was the eldest son of Diego López II de Haro and his wife, María Manrique. Lope was also a member of the Order of Santiago.

Captaincies were military and administrative divisions in colonial Spanish America and the Spanish Philippines, established in areas under risk of foreign invasion or Indian attack. They could consist of just one province, or group several together. These captaincies general should be distinguished from the ones given to almost all of the conquistadores, which was based on an older tradition. During the Reconquista, the term "captain general" and similar ones had been used for the official in charge of all the troops in a given district. This office was transferred to America during the conquest and was usually granted along with the hereditary governorship to the adelantado in the patent issued by the Crown. This established a precedent that was recognized by the New Laws of 1542, but ultimately the crown eliminated all hereditary governorships in its overseas possessions.

Pedro Ponce de León the Elder was a Castilian nobleman, grandson of King Alfonso IX of León. He was a knight of the Order of the Band, and Lord of Marchena, Bailén, Rota, Mairena del Alcor, Bornos and Oliva de la Frontera.

Enrique Enríquez the Younger was a nobleman of Castile, son of Enrique Enríquez the Elder. He was lord of Villalba de los Barros, Nogales, Almendral, La Parra, Begíjar and other towns. He was Adelantado Mayor of the border of Andalusia, chief justice of the King's House, Chief of the forces of the bishopric and Kingdom of Jaén, Mayor of Seville and Knight of the Band.