The Adomi Bridge (originally the Volta Bridge) is a latticed steel arch suspension bridge crossing the Volta River at Atimpoku in Ghana in West Africa. It is the first permanent bridge to span the Volta River, which drains south into the Gulf of Guinea, and is Ghana's longest suspension bridge. It provides the main road passage, just south of the Akosombo Dam, between the Eastern Region and the Volta Region of Ghana. It was opened in 1957 by Kwame Nkrumah, Ghana's first president. The iconic crescent-shaped arch bridge is featured in Ghanaian stamps and currency.

In 1953 (before the independence of Ghana in 1956 from British colonial rule), the decision was made to build a bridge across the Volta River to replace the overloaded ferry service at Senchi where delays were occasionally up to a few days. Reconnaissance indicated a good site for a single-span crossing about 800 ft long at a narrow neck of the river at Adomi, about 2.5 miles upstream of the ferry and closer to the then-projected dam and power station in the Volta River Project. Several sketch designs for an arch bridge or a suspension bridge at Adomi and other sites were drawn and cost estimates were developed. The Standing Development Committee chose the single-span arch at Adomi. [1]

Aesthetically the arch was the perfect complement to the trough of the valley... and the silver colour proposed for the steelwork would offset the green of the hills against which it would be seen. --Scott and Roberts (1958) [1]

In Fall 1953 the consulting engineers were appointed: Sir William Halcrow & Partners were the project administrators and designed all approach roads and spans, while Freeman Fox & Partners were to design the single-span arch bridge. A year later, tenders were invited for the complete project, include approach roads, the arch bridge and approach spans. By January 1955, the contracts were settled and some construction staff began to arrive on site. Dorman Long (Bridge and Engineering) Ltd was the main construction contractor and Cleveland Bridge & Engineering Company was the steelwork fabricator. Work on the bridge began in March 1955, with the steel parts being prefabricated in the United Kingdom, while concrete works for the approach spans and the bridge abutments were carried out on site. The prefabricated parts were fully welded, but almost all on-site steelwork erections were designed as bolted connections, including those of the upper and lower chord of the crescent-shaped arch. After the steelwork was completed for the arch and the deck, the concrete carriageway was built. By January 1957 the project was substantially completed. The total cost of the completed project was 682 thousand British pounds. [1]

The single-span arch bridge was designed by William Brown of the engineers Freeman Fox & Partners. It is a two-hinged silver latticed steel crescent-shaped arch bridge with a two-lane road deck suspended by cables. [2] The lower-chord arch rises 158.5 ft (48.3 m) above the hinges and the main span is 805 ft (245 m) long. To make an aesthetically pleasing crescent-shaped arch, the lower curve formed by the lower chords is a parabola, and the upper curve is derived from it by offsets decreasing logarithmically from the center to the hinges. [1]

As the roadbed is suspended by means of vertical cable stays (hangers) connected to the steel truss arch, the bridge can be considered as a hybrid arch suspension type. [3] Pairs of vertical cables or hangers are attached at 35-ft intervals to the deck transverse beams, which, along with six longitudinal stringer beams and bracers in between the transverse beams, support the weight of the roadway and its load. [1] [4]

The bridge was officially opened on 25 January 1957 by Kwame Nkrumah, then Prime Minister of the Gold Coast and first President of Ghana. [5] It carries the National Route N2 and has been of tremendous help to travellers and traders who use the road to access the east and north regions of Ghana.

Route to the bridge

The Adomi bridge is located in Atimpoku in the Eastern Region of Ghana, which is along the Volta River. The bridge carries National Route N2 and connects parts of the Eastern Region and Juapong in the North Tongu District, Ho, Hohoe and other towns in the Volta Region. A trip from the north regions of Ghana on N2 would go through the eastern corridor and finally use the Adomi Bridge to cross the Volta River. The bridge is about 87 km (54 mi) northeast of Accra, the capital of Ghana, and about 75 km (47 mi) north of the port of Tema. [6]

In April 2019, Adomi Bridge was classified as a tourist site after a consensus between the Asuogyaman District Assembly, Ghana Highway Authority and Ghana Tourism Development Company (GTDC). [12] 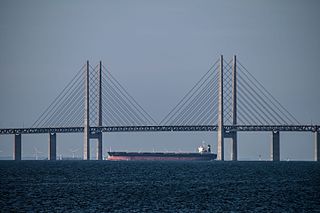 A cable-stayed bridge has one or more towers, from which cables support the bridge deck. A distinctive feature are the cables or stays, which run directly from the tower to the deck, normally forming a fan-like pattern or a series of parallel lines. This is in contrast to the modern suspension bridge, where the cables supporting the deck are suspended vertically from the main cable, anchored at both ends of the bridge and running between the towers. The cable-stayed bridge is optimal for spans longer than cantilever bridges and shorter than suspension bridges. This is the range within which cantilever bridges would rapidly grow heavier, and suspension bridge cabling would be more costly.

The William Jolly Bridge is a heritage-listed road bridge over the Brisbane River between North Quay in the Brisbane CBD and Grey Street in South Brisbane, within City of Brisbane, Queensland, Australia. It was designed by A E Harding Frew and built from 1928 to 1932 by M R Hornibrook Ltd.

A cantilever bridge is a bridge built using cantilevers, structures that project horizontally into space, supported on only one end. For small footbridges, the cantilevers may be simple beams; however, large cantilever bridges designed to handle road or rail traffic use trusses built from structural steel, or box girders built from prestressed concrete. The steel truss cantilever bridge was a major engineering breakthrough when first put into practice, as it can span distances of over 1,500 feet (460 m), and can be more easily constructed at difficult crossings by virtue of using little or no falsework.

The Percy V. Pennybacker Jr. Bridge in Austin, Texas, is a through-arch bridge across Lake Austin which connects the northern and southern sections of the Loop 360 highway, also known as the "Capital of Texas Highway." The road is widely considered one of the most scenic urban drives in Texas, in large part due to this arched weathering-steel bridge and the rolling hills that flank the road. In 2001, 48,000 vehicles crossed the bridge daily. Ten years prior to this, 22,000 vehicles had crossed the bridge daily. Since its construction, Pennybacker Bridge has become subject to numerous souvenir designs in gift shops, along with additions to many Austin-themed t-shirts, tote bags, and keychains.

Howrah Bridge is a balanced cantilever bridge over the Hooghly River in West Bengal, India. Commissioned in 1943, the bridge was originally named the New Howrah Bridge, because it replaced a pontoon bridge at the same location linking the two cities of Howrah and Kolkata (Calcutta). On 14 June 1965 it was renamed Rabindra Setu after the great Bengali poet Rabindranath Tagore, who was the first Indian and Asian Nobel laureate. It is still popularly known as the Howrah Bridge.

William Christopher Brown OBE was a structural engineer and bridge designer who specialised in suspension bridges. He is credited with the idea of designing bridge decks with an aerofoil-shaped cross section for stability in a wide variety of wind conditions. 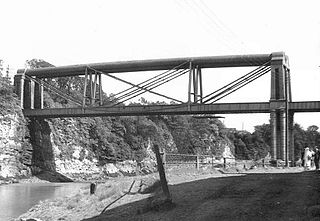 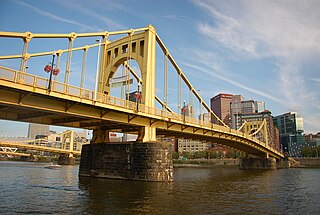 Hampden Bridge is a heritage-listed single-span suspension bridge that carries Moss Vale Road (B73) across the Kangaroo River, in Kangaroo Valley, in the City of Shoalhaven local government area of New South Wales, Australia. The bridge was designed by Ernest de Burgh and built by Loveridge and Hudson. The property is owned by Roads and Maritime Services, an agency of the Government of New South Wales. It was added to the New South Wales State Heritage Register on 2 August 2019. 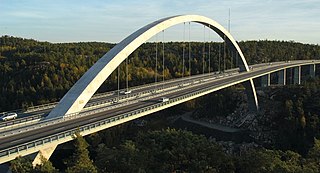 The Svinesund Bridge is a through arch bridge crossing Iddefjord at Svinesund, and joining Sweden and Norway. Svinesund is a sound separating the Swedish municipality of Strömstad from the Norwegian municipality of Halden, and thus it is the border between Norway and Sweden in this region. The bridge is the westernmost border crossing between the two countries and carries the European route E6 which is a major traffic route in the area, connecting Oslo and the rest of Norway with Gothenburg, Malmö, Copenhagen and the rest of Europe. 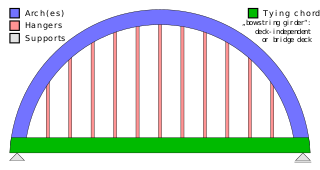 A tied-arch bridge is an arch bridge in which the outward-directed horizontal forces of the arch(es) are borne as tension by a chord tying the arch ends, rather than by the ground or the bridge foundations. This strengthened chord may be the deck structure itself or consist of separate, deck-independent tie-rods. 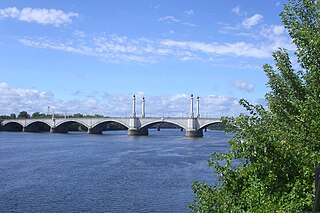 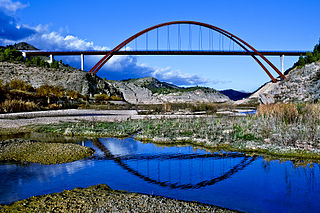 La Vicaria Bridge is a through arch bridge that spans the Segura River, where it meets La Fuensanta Reservoir near Yeste, in the province of Albacete, Spain. It forms part of a future road that will join Yeste with Letur and the neighbouring area to the east. The bridge has 2 vehicle lanes and 2 sidewalks. 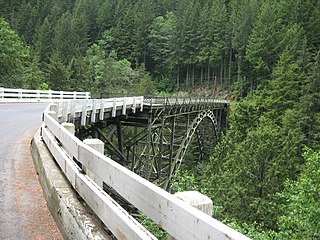 The Fairfax Bridge is a steel-lattice three-hinged arch bridge spanning the Carbon River on State Route 165 in Pierce County, Washington. Previous to the construction of the bridge in 1921, the only route south to the area around Fairfax was by train. At a total cost of $80,000, the bridge's deck sits 250 feet (76 m) above the river. 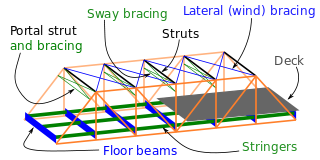 A deck is the surface of a bridge. A structural element of its superstructure, it may be constructed of concrete, steel, open grating, or wood. Sometimes the deck is covered a railroad bed and track, asphalt concrete, or other form of pavement for ease of vehicle crossing. A concrete deck may be an integral part of the bridge structure or it may be supported with I-beams or steel girders.

The Mianus River Bridge is a span that carries Interstate 95 over the Mianus River in the Cos Cob section of Greenwich, Connecticut. It is the second bridge on the site. The original bridge collapsed in 1983, killing three motorists. The replacement span is officially named the Michael L. Morano Bridge, after a state senator Michael L. Morano who represented Greenwich.

Senchi is a town in the Asuogyaman District of the Eastern Region of Ghana. 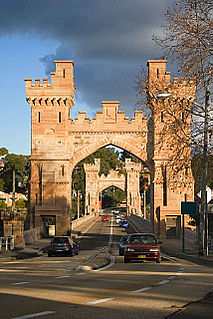 The Long Gully Bridge, also known as Northbridge, Suspension Bridge, and Cammeray Bridge, is a concrete arch road bridge that carries Strathallen Avenue across Flat Rock Creek and Tunks Park, and connects the suburbs of Cammeray, in the North Sydney Council local government area to its south, with Northbridge in the City of Willoughby local government area to its north, in Sydney, New South Wales, Australia.