Ariel Rebecca Martin (born November 22, 2000), known professionally as Baby Ariel, is an American social media personality, singer and actress, known for her videos on the social media platform musical.ly (now known as TikTok). She was recognized as one of the most influential people on the Internet by Time magazine in 2017, [1] and was featured on Forbes 2017 list of top entertainment influencers. [2] [3]

Ariel is known for her social media work, particularly her work on the social media platform TikTok, and for starring as Wynter in the Disney Channel Original Movie movie Zombies 2 . She has over 34.7 million TikTok followers, [4] 9.8 million Instagram followers, [5] 3.07 million YouTube subscribers, [6] and 1.1 million Twitter followers. [7] She won the Teen Choice Award for "Choice Muser" in 2016 and 2017.

In 2015, Ariel launched an anti-bullying campaign called #ArielMovement, described by BlackBook as one of her most important endeavors. [8] People magazine recognized her for her support in the #HackHarassment initiative to stop Internet trolls and negativity on the Internet. [9]

On March 30, 2018, Ariel released the song "Say It" with Daniel Skye. [22] She collaborated with EA Games for The Sims 4 , appearing as a Sim in the expansion pack The Sims 4: Get Famous , released in November 2018. [23] In late 2018, Ariel starred in Baby Doll Records, a mini-series on Brat. In 2019, she starred in Bixler High Private Eye , a Nickelodeon television film. Later that year, it was announced that she would be appearing in the Disney Channel film Zombies 2 , and would portray the role of Wynter.

Kylie Kristen Jenner is an American media personality, socialite, model, and businesswoman. She has starred in the E! reality television series Keeping Up with the Kardashians since 2007 and is the founder and owner of cosmetic company Kylie Cosmetics. 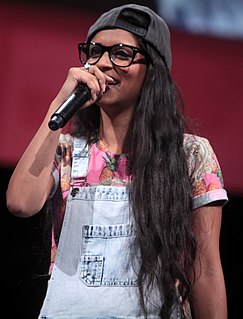 Lilly Singh is a Canadian YouTuber, comedian, talk show host, and actress who gained fame on social media under the pseudonym IISuperwomanII. Born and raised in Scarborough, Toronto, Singh began making YouTube videos in 2010. By 2017, she was ranked tenth on the Forbes list of the world's highest paid YouTube stars, earning a reported $10.5 million; as of September 2019 she has fourteen million subscribers and over three billion video views. Singh has featured in the annual YouTube Rewind every year since 2014. Forbes named her one of the 40 most powerful people in comedy in 2019. Singh has received an MTV Fandom Award, four Streamy Awards, two Teen Choice Awards, and a People's Choice Award.

Rolf Jacob Sartorius is an American singer and internet personality, who rose to fame via social media from posting comedic videos on Vine and lip-syncing videos on musical.ly and TikTok. In 2016, he released his debut single "Sweatshirt", which reached a peak of 90 on the Hot 100 chart in the United States. Jacob Sartorius was the 9th most searched musical artist of 2016.

Musical.ly was a Chinese social media service headquartered in Shanghai with a US office in Santa Monica, California, on which platform users created and shared short lip-sync videos. The first prototype was released in April 2014, and the official version was launched in August of that year. Through the app, users could create 15-second to 1-minute lip-syncing music videos and choose sound tracks to accompany them, use different speed options and add pre-set filters and effects. The app also allowed users to browse popular "musers", content, trending songs, sounds and hashtags, and uniquely interact with their fans.

Lisa and Lena Mantler, more commonly referred to as Lisa and Lena, are identical twins from Stuttgart, Germany. They make short videos, especially of lip syncing, on social media outlets such as TikTok, Instagram and Twitter. 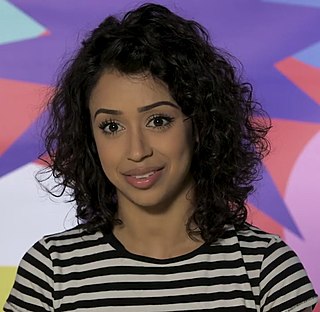 María Luisa "Malu" Trevejo is a Cuban-born singer based in Los Angeles, California who performs in both Spanish and English. She became famous for her videos on the video sharing app Musical.ly. She's now also an Instagram personality with more than 8 million followers. On September 22, 2017, she released her debut single, "Luna Llena" through Universal Music Latin. It has acquired over 100 million views on her YouTube channel as of November 2019. Not long after, she released another single "En Mi Mente" which has surpassed 10 million views.

TikTok, known in China as Douyin, is a Chinese video-sharing social networking service owned by ByteDance. It is used to create short music, lip-sync, dance, comedy and talent videos of 3 to 15 seconds, and short looping videos of 3 to 60 seconds. It is an international version of Douyin that was originally released in the Chinese market in September 2016. Later, TikTok was launched in 2017 for iOS and Android in most markets outside of mainland China; however, it only became available worldwide, including the United States, after merging with another Chinese social media service Musical.ly on 2 August 2018. TikTok and Douyin have almost the same user interface but no access to each other's content. Their servers are each based in the market where the respective app is available. The two products are similar, but features are not identical. Douyin includes an in-video search feature that can search by people's face for more videos of them and other features such as buying, booking hotels and making geo-tagged reviews. Since its launch in 2016, TikTok/Douyin rapidly gained popularity in East Asia, South Asia, Southeast Asia, the United States, Turkey, Russia, and other parts of the world. As of October 2020, TikTok surpassed over 2 billion mobile downloads worldwide.

Loren Gray Beech is an American singer and social media personality from Pottstown, Pennsylvania, who is signed to Virgin Records and Capitol Records.

David Julian Dobrik is a Slovak YouTube personality. He found early success on the video sharing platform Vine, before starting his vlog on his YouTube channel in 2015. Dobrik is known for being the leader of the popular YouTube ensemble The Vlog Squad, which features prominently in his vlogs and comprises rotating selections of his friend group. As of September 2020, Dobrik's vlog channel had accumulated 18 million subscribers and 7.7 billion views. The channel was the fifth-most viewed creator channel on YouTube in 2019, with 2.4 billion views that year. In March 2020, He was named "Gen Z's Jimmy Fallon" by The Wall Street Journal.

Brent Austin Rivera is an American YouTuber, social media personality and actor. He played the roles of Alexander in Alexander IRL (2017) and Issac Salcedo in Light as a Feather (2018–2019). Although, Brent Rivera got popular on Vine, one of the original video streaming platforms, he now has a large following across platforms like Instagram, TikTok, and Youtube.

Ashton Nicole Casey, better known as Ashnikko, is a British-based American singer, songwriter, and rapper. She rose to prominence with her 2019 single "Stupid" with Yung Baby Tate, which gained viral popularity on the video-sharing platform TikTok and was certified gold in the United States and Canada. Preceded by the singles "Cry" and "Daisy", Ashnikko's debut mixtape, Demidevil, is scheduled for release on February 19, 2021.

Charli Grace D'Amelio is an American social media personality and dancer. Born and raised in Norwalk, Connecticut, she was a competitive dancer for over 10 years before starting her social media career. She started actively posting content on the video-sharing app, TikTok, in late 2019, where she would post dance videos to trending songs on the platform. She quickly amassed a large following and subsequently became the most-followed creator on the app, surpassing Loren Gray.

Addison Rae Easterling is an American social media personality, dancer and actress. As of September 2020, she has amassed over 61 million followers on TikTok, ranking as the second most-followed individual on the platform. In August 2020, Easterling was named as the highest-earning TikTok personality by Forbes.

Kristen Hancher is a Canadian actress and social media personality known for her creative music, dance, and lip-sync videos on the social media platform TikTok. She is known for her fashion style as well. Kristen shows off her stylish and expensive wig collection on her social media accounts. She is the 33rd most-followed individual on TikTok.

Chase Hudson, also known as Lil Huddy, is an Internet celebrity known for his relationship with Charli D’Amelio and as one of the co-founders of the TikTok collective known as the Hype House. According to Billboard, he is one of the top 10 music influencers on TikTok, with over 20 million followers, and one of the most influential people on the platform. Hudson is known for popularizing the e-boy style.

Nicola Teresa DeMartino and Gabriella Nelida DeMartino, known professionally as Niki and Gabi, are American social media influencers, YouTubers, singers and actresses. In 2018, the duo won a Streamy Award in the category of fashion.

Sebastian Bails is a TikToker and YouTuber most known for his content featuring his girlfriend and frequent collaborator Lauren Godwin. Both Bails and Godwin are considered "OG" or "classic" TikTokers and were on TikTok's predecessor app musical.ly and are known for producing clickbait and controversial videos. Godwin arrived later to the app, and her earlier content was very different thematically to her current work. Both have been trying to build their social media presence on platforms outside of TikTok since 2019.