Bedgebury National Pinetum at Bedgebury, Kent, in the United Kingdom, is a recreational and conservational arboretum managed by Forestry England that was established as the National Conifer Collection in 1925 and is now recognised as the most complete collection of conifers on one site anywhere in the world. The collection has over 10,000 trees growing across 320 acres (1.3 km2), including rare, endangered and historically important specimens. Bedgebury National Pinetum conducts conservation work and is home to some 56 vulnerable or critically endangered species and houses five NCCPG National Plant Collections.

Bedgebury is first mentioned in an Anglo-Saxon charter in AD 841, the name deriving from the Old English bycgan , meaning "buy", and the Kentish vecge, meaning "to bend or turn", possibly in reference to a stream. [1]

John de Bedgebury is listed as the earliest resident of Bedgebury, in the time of Edward II. In the 15th century Agnes de Bedgebury, sister and heir of John (died 1424) married John Colepeper, [2] whose Colepeper heirs, financed by mining clay-ironstone on the estate, were resident until at the time of the restoration of Charles II, and who created an ornamental park on the Bedgebury estate. Elizabeth I visited in August 1573.

The current house was built in 1688 for Sir James Hayes, a little apart from the old house. The estate later passed to the Stephenson family, who retained it until it was left to a Miss Peach, who sold it in 1789 to John Cartier, Governor of Bengal and High Sheriff of Kent, [1] who improved the plantings and the house. [3]

In the 1840s Viscount William Beresford developed the estate by creating the village of Kilndown and three lodges, one of which – Keepers Lodge, now known as Park House – became the centre of the Pinetum. Beresford initiated the pinetum in the 1850s and his successor, his stepson Alexander Beresford Hope, developed Lady Mildred's Drive to enable visitors in carriages to view the trees. [1]

The estate was sold in 1899 to Isaac Lewis, who allowed the collection to fall into neglect, and it was purchased by the Crown Estate in 1918 for its marshy land and drier ridges, as well as its streams, lakes and valleys.

In 1919, the house was bought by the Church Education Corporation to operate as a school. The school closed in 2006. [4]

The Royal Botanic Gardens at Kew and the Forestry Commission established the site as The National Pinetum in a joint venture in 1924, as the National Conifer Collection, because air pollution was rendering London unsuitable for growing conifers. A site at the southern end of Bedgebury Park was chosen, centred on Marshall's Lake and a stream-filled valley. [1] [5]

The first plants for the pinetum were raised at Kew Gardens in 1921 and transferred to Bedgebury in 1925 and 1926, alongside Viscount Beresford's existing plantings. Development of the collection was managed by the Kew botanist William Dallimore, a world-renowned expert on conifers. [5]

In 1969 management of the pinetum reverted solely to the Forestry Commission, now Forestry England, who extended it in 1977 and created two new lakes. In the Great Storm of 1987 almost a quarter of the trees were brought down. [1] [5]

The aim of Bedgebury National Pinetum is "to grow as many species of conifers as the climatic conditions will allow, planted in generic groupings, using geographically associated plantings where possible." (W. Dallimore, 1923) [5]

The pinetum holds 10,000 specimens of conifers and other species that grow in temperate zones, including 7,000 trees, as living gene banks and as a genetic resource for future restoration programmes. It holds 2,300 different species of conifer, specimens of which include the tallest tree in Kent ( Abies grandis ) and the three tallest Leyland Cypresses in the UK. The plan is for the pinetum to provide a mix of 70% conifers to 30% broadleaves, and to leave 40% of the site open to provide vistas and allow the trees to be appreciated. [5] [6]

The collection contains 56 species that have been officially declared vulnerable or critically endangered. [5]

The scale and quality of Bedgebury National Pinetum's conifer collection have made it an ideal site to take part in the International Conifer Conservation Programme (ICCP), run by the Royal Botanic Garden Edinburgh. The ICCP aims to promote the conservation of conifers through conservation work, research and education, and work carried out at Bedgebury makes up part of the effort to conserve the genetic diversity of conifers, particularly those from temperate forests. [5]

The Bedgebury Conifer Conservation Project, initiated in 2007, is designed to use redundant forest plots to grow large numbers – up to 500 – of endangered conifers to provide an ex-situ genetic resource. The first plots were planted with Chilean plum yew by Boy Scouts celebrating their centenary in 2007, and future plantings will include samples from Europe, Asia, North America and Australasia. [6]

Pinus radiata, the Monterey pine, insignis pine or radiata pine, is a species of pine native to the Central Coast of California and Mexico. It is an evergreen conifer in the family Pinaceae. 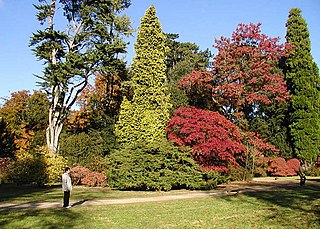 An arboretum in a general sense is a botanical collection composed exclusively or very largely of trees of a variety of species. Originally mostly created as a section in a larger garden or park for specimens of mostly non-local species, many modern arboreta are in botanical gardens as living collections of woody plants and is intended at least in part for scientific study. 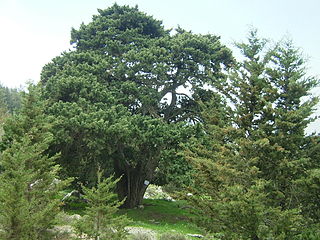 Cupressus is one of several genera of evergreen conifers within the family Cupressaceae that have the common name cypress; for the others, see cypress. It is considered a polyphyletic group. Based on genetic and morphological analysis, the genus Cupressus is found in the subfamily Cupressoideae. The common name "cypress" comes via the Old French cipres from the Latin cyparissus, which is the latinisation of the Greek κυπάρισσος (kypárissos). 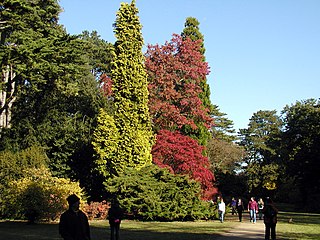 Westonbirt, The National Arboretum is an arboretum in Gloucestershire, England, about 3 miles (5 km) southwest of the town of Tetbury. Managed by Forestry England, it is perhaps the most important and widely known arboretum in the United Kingdom. 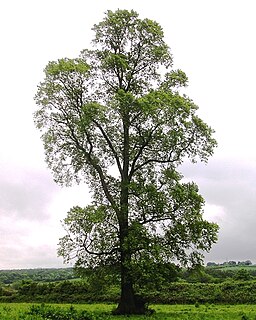 Ulmus minor subsp. minor, the smooth-leaved elm, narrow-leaved elm or East Anglian elm, is a subspecies of the field elm native to southern Europe and Asia Minor including Iran.

Plant Heritage, formerly known as the National Council for the Conservation of Plants and Gardens (NCCPG), is a botanical conservation organisation in the United Kingdom and a registered charity. It was founded in 1978 to combine the talents of botanists, horticulturalists and conservationists with the dedication of keen amateur and professional gardeners. The mission statement of the organisation declares that "The NCCPG seeks to conserve, document, promote and make available Britain and Ireland's rich biodiversity of garden plants for the benefit of everyone through horticulture, education and science." Specifically, the aims of the organisation are to:

The National Plant Collection scheme is the main conservation vehicle whereby the Plant Heritage, formerly National Council for the Conservation of Plants and Gardens (NCCPG) can accomplish its mission: to conserve, grow, propagate, document and make available the resource of garden plants that exists in the United Kingdom. 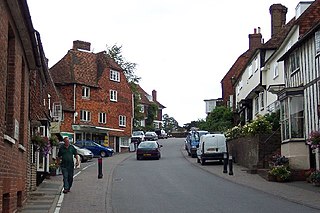 Goudhurst is a village and civil parish in the borough of Tunbridge Wells in Kent, England. It lies in the Weald, around 12 miles (19 km) south of Maidstone, on the crossroads of the A262 and B2079.

Prumnopitys andina, the lleuque or Chilean plum yew, is an evergreen coniferous tree native to south-central Chile and a few areas in adjacent parts of westernmost Argentina from 36 to 40° South latitude. It lives on moderately wet soils, preferably on Andean slopes from 500–1,100 meters (1,600–3,600 ft).

Austrocedrus is a genus of conifer belonging to the cypress family (Cupressaceae). It has only one species, Austrocedrus chilensis, native to the Valdivian temperate rain forests and the adjacent drier steppe-forests of central-southern Chile and western Argentina from 33°S to 44°S latitude. It is known in its native area as ciprés de la cordillera or cordilleran cypress, and elsewhere by the scientific name as Austrocedrus, or sometimes as Chilean incense-cedar or Chilean cedar. The generic name means "southern cedar".

Torreya taxifolia, commonly known as the stinking-cedar or Florida torreya, but also sometimes as gopher wood or Florida nutmeg, is an endangered tree of the yew family, Taxaceae, found in the Southeastern United States, at the state border region of northern Florida and southwestern Georgia.

Ulmus wallichianaPlanch., the Himalayan elm, also known as the Kashmir elm and Bhutan elm, is a mountain tree ranging from central Nuristan in Afghanistan, through northern Pakistan and northern India to western Nepal at elevations of 800–3000 m. Although dissimilar in appearance, its common name is occasionally used in error for the cherry bark elm Ulmus villosa, which is also endemic to the Kashmir, but inhabits the valleys, not the mountain slopes. The species is closely related to the wych elm U. glabra.

Pinus devoniana is a species of conifer in the family Pinaceae. It is found in more than 15 states of Mexico - from S. Sinaloa to Chiapas - and Guatemala in montane, relatively open pine or pine-oak forests at altitudes from 900 to 2500 m. 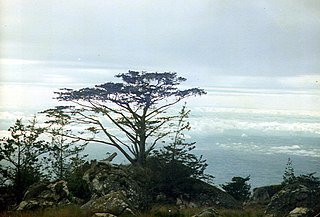 Widdringtonia whytei, the Mulanje cedar or Mulanje cypress, is a species of conifer native to Malawi, where it is endemic to the Mulanje Massif at altitudes of 1,830–2,550 m. It has become endangered as a result of over-harvesting for its wood, and an increase in the frequency of wildfires due to human activity. 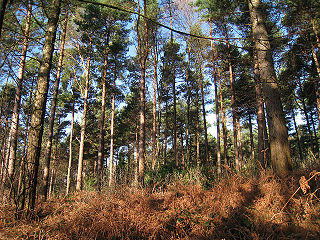 Bedgebury Forest is a 10.5 square kilometres forest surrounding Bedgebury National Pinetum, near Flimwell in Kent. In contrast to the National Pinetum, which contains exclusively coniferous trees, the forest contains both deciduous and coniferous species. It forms part of the High Weald Area of Outstanding Natural Beauty, and is one of the so-called "Seven Wonders Of The Weald". Bedgebury Forest has facilities for cycling, mountain biking, riding, orienteering and adventure play.

William Dallimore was an English botanist who published a “Handbook of Coniferae” and who played an important role in the start and development of Bedgebury Pinetum.

Longstock Park is in the civil parish of Longstock in the Test Valley district of Hampshire, England, and forms part of the Leckford Estate, wholly owned by the John Lewis Partnership. Formerly Longstock Manor, of medieval origins, the park was purchased by Sir Joshua East in 1849. On his death, the park passed to his sons Alfred and Arthur. In 1914, the park became the home of the Beddington family until 1945, when it was sold to John Spedan Lewis, founder of the John Lewis Partnership. Lewis lived at Longstock House throughout his retirement until his death in 1963, after which the house became a retreat for the company's executives. The park is today home to a retail horticultural emporium, the Longstock Park Nursery, and also accommodates an arboretum and water gardens. 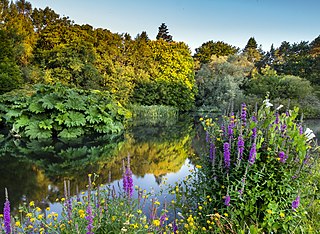 The John F. Kennedy Arboretum on the Hook Head Peninsula at New Ross, County Wexford, Ireland, is a park under public administration ). 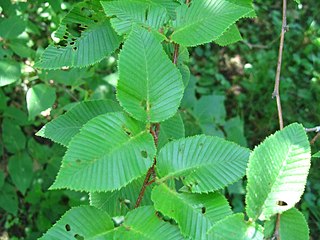 Betula chichibuensis, commonly known as Chichibu birch, is a species of birch native exclusively to limestone outcrops in the Okuchichibu and Kitakami Mountains of central and northeast Honshu, Japan. The tree is rated as Critically Endangered on the IUCN Red List due to its extreme rarity and limited range.