Blazing Dragons is a Canadian-French animated television series created by Terry Jones and Gavin Scott, and produced by Nelvana and Ellipse Animation. [1] A coinciding graphic adventure video game was released for the original PlayStation and Sega Saturn in 1996 by Crystal Dynamics. The video game features the voice talents of several celebrities.

The series' protagonists are anthropomorphic dragons who are beset by evil humans, reversing a common story convention. The series parodies that of the King Arthur Tales as well as the periods of the Middle Ages. [2]

From 1996 to 1998, Blazing Dragons was produced by Nelvana in Canada and Ellipse Programme in France. In the series, King Allfire and his Knights of the Square Table fight against the evil Count Geoffrey and his inept minions. It ran for two seasons consisting of 26 episodes in total.

The cartoon episodes that ran in the United States, namely Toon Disney, were bowdlerised. Parts of episodes considered too overt, such as the implied homosexuality of an effeminate character named Sir Blaze, and minor swearing, were cut for the American release, as such matters were deemed taboo to American children's programming at the time.

Although the voice actors are of Canadian and American nationality in real life, they voiced some of the characters with British accents (mainly the dragons were given that aforementioned accent), while some characters such as Count Geoffery had Canadian accents, and Merle the Wizard has an American accent.

The series has gained a loyal fan following and several fan-written continuations of the series have been published online. Fan endeavours have differed in scale and scope, the "Brother Mine" series of novellas on wattpad being one notable example. Since July 2016, a new project called #BDRevolution or #BlazingDragonsRevolution appeared, consisting of making the fanbase grow through fanwork and converting new fans, bringing back old fans, convincing people who worked on the franchise (game and show) to support it, to convince Gavin Scott or Terry Jones to give the franchise a new chance, through any forms such as a new broadcasting, DVDs, a third season, a movie, a second game, or comic books, and so on. The project is slowly growing and was co-created by a fan and former story editor of season 2 Erika Strobel.

Currently the entire series is available for purchase (for streaming only) at Amazon. No DVD set is known to be produced as of June 2019. 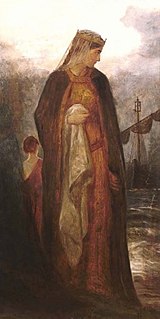 Guinevere, also often written as Guenevere or Guenever, is the legendary queen and wife of King Arthur. First recorded in literature by the early 12th century, nearly 700 years after the purported times of Arthur, Guinevere has been portrayed as everything from a villainous and opportunistic traitor to a fatally flawed but noble and virtuous lady. A notably recurring theme in many Arthurian tales is that of her abduction.

The black knight is a literary stock character who masks his identity and that of his liege by not displaying heraldry. Black knights are usually portrayed as villainous figures who use this anonymity for misdeeds. They are often contrasted with the knight-errant. The character appeared in Arthurian literature and has been adapted and adopted by various authors, in cinema and popular culture. The character is sometimes associated with death or darkness.

The Black Knight is the alias of several fictional characters appearing in American comic books published by Marvel Comics.

Mystic Knights of Tir Na Nog is an Irish/American fantasy-adventure television series set in a fantasy version of ancient Ireland, created by Saban Entertainment. It was loosely based on actual Irish mythology. The name is derived from Tír na nÓg, one of the Otherworlds of Irish mythology. It was Saban's first fantasy series to involve knights, dragons, and wizards. It aired on the Fox Kids Network from September 12, 1998 and ending on May 7, 1999. A second season entitled Mystic Knights: Battle Thunder was planned, but was later cancelled, and its budget was put towards Power Rangers Lost Galaxy and the English dub version of Digimon: Digital Monsters. The resulting series was an attempt in doing an original non-Japanese special-effects series rather than adapting from actual Japanese tokusatsu.

Potatoes and Dragons is a Canadian-French animated series produced by Alphanim, Cinar, Canal J, France 3 & Europool. It was formerly broadcast in the United States until late September 2010 on This TV.

King Arthur and the Knights of Justice is an animated series produced by Golden Films, C&D and Bohbot Entertainment. The series was created by Jean Chalopin along with Diane Eskenazi and Avi Arad who were also executive producers of the series, which lasted for two seasons of 13 episodes each. Its first episode aired on September 13, 1992, and the last episode was on December 12, 1993. It aired as part of Bohbot's Amazin' Adventures programming block.

The King's Demons is the sixth and final serial of the 20th season of the British science fiction television series Doctor Who, which was originally broadcast on BBC1 on 15 and 16 March 1983. This serial introduced Kamelion, voiced by Gerald Flood, as a companion.

The paladin is one of the standard playable character classes in most editions of the Dungeons & Dragons fantasy role-playing game. The paladin is a holy knight, crusading in the name of good and order, and is a divine spellcaster.

Brunor, Breunor, Branor or Brunero are various forms of a name given to several different characters in Arthurian legend. They include Knight of the Round Table known as Brunor/Breunor le Noir, as well as his father and others, among them another former knight of Uther's old Round Table and the father of Galehaut.

Pocket Dragon Adventures is a 1998 Spanish/American syndicated animated series produced by Spanish animation D'Ocon Films, in co-production with Televisión Española, Bohbot Entertainment, and DIC Productions. The series is based on the Pocket Dragon character created by artist Real Musgrave, best known from Pocket Dragons figurines also based on his work. The cartoon is about the Pocket Dragons who live with a kindly old wizard, and their many adventures. The series was produced by Bohbot Entertainment and D'Ocon Films Productions. The show first aired in the late-1990s/early-2000s in syndication in the US and about 50 other countries. 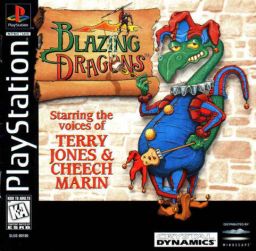 Blazing Dragons is a point-and-click adventure game developed by the Illusions Gaming Company and published by Crystal Dynamics. It is based on the television series of the same name and was released for the PlayStation and Sega Saturn in late 1996. 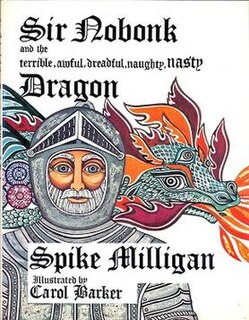 Sir Nobonk and the Terrible Dreadful Awful Naughty Nasty Dragon is a 1982 comedy novel written by Spike Milligan, and the fourth picture book by Milligan after The Bald Twit Lion, Badjelly the Witch and Dip the Puppy.

Blaze and the Monster Machines is a CGI-animated interactive children's television series with a focus on teaching STEM that premiered on Nickelodeon on October 13, 2014. The series revolves around Blaze and AJ, a monster truck and human driver duo, respectively, as they have adventures in Axle City and learn about various STEM concepts which help them on their way. Joining them is the human mechanic Gabby and their monster truck friends Stripes, Starla, Darington and Zeg as well as their rival Crusher and his sidekick Pickle. Then later on, Watts joins the main cast in Season 3.

Nella the Princess Knight is an American animated children's television series created by Christine Ricci Ph. D. that aired on Nickelodeon, Nick Jr., and Paramount+ from February 6, 2017 to July 21, 2021. Toys produced for the series are manufactured by Vivid Imaginations.

The Reluctant Dragon & Mr. Toad Show is a 1970 American animated television series that aired on ABC's Saturday morning schedule. The show features two characters created by British children's writer Kenneth Grahame: the Reluctant Dragon from the 1898 short story of the same name, and Mr. Toad from the 1908 novel The Wind in the Willows. The show was created by Rankin/Bass Productions in New York City, who produced 17 episodes. The show was a flop and canceled midway through its first season, airing from September 12 until December 26, 1970. A year later, ABC aired reruns of the show on Sunday mornings on September 12, 1971.