Bera may refer to:

The Pakistan Nuclear Regulatory Authorityپاکستان نیوکلیئر ریگولیٹری اتھارٹى; (PNRA), is mandated by the Government of Pakistan to regulate the use of nuclear energy, radioactive sources and ionizing radiation. The mission of PNRA is to protect the public, radiation workers and environment from the harmful effects of ionizing radiation by formulating and implementing effective regulations, building a relationship of trust with licensees, and maintaining transparency in its actions and decisions.

The Internet in Zimbabwe has seen rapid expansion in recent years. The Internet country code top-level domain is .zw. In 2009, the Mugabe-Tsvangirai Government of National Unity established a Ministry of Information and Communications Technology to focus on ICT growth and development.

The Tanzania Commission for Science and Technology (COSTECH) is a parastatal organization affiliated with the government of Tanzania. It was created by an Act of the National Assembly of Tanzania in 1986 as a successor to the Tanzania National Scientific Research Council. The commission was a subsidiary institution to the Ministry of Communications, Science and Technology (MCST) and is now a subsidiary institution to the Ministry of Education, Science & Technology. The main offices are located in Dar es Salaam.

The Electricity Regulatory Authority (ERA) is a government agency that regulates, licenses, and supervises the generation, transmission, distribution, sale, export, and importation of electrical energy in Uganda.

This is a list of the federal institutions of Tanzania. 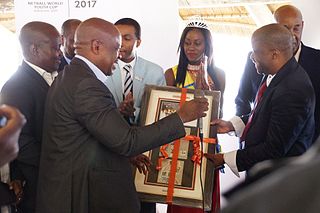 BotswanaPost is the company responsible for postal service in Botswana. It is a parastatal company, 100% owned by the Government of Botswana, under the Ministry of Transport and Communications.

Botswana Power Corporation (BPC) is a state owned company for electrical power generation, transmission and distribution in Botswana. It was established in 1970 and is currently the only electricity supplier in the country. BPC produced an estimated 1,052 GWh in 2007, while demand was estimated to 2,648 GWh. BPC represents Botswana in the Southern African Power Pool. Morupule Power Station (coal-fired) in Palapye supplies 80% of domestically generated electricity, however the country is dependent on importing energy from its neighbours. Its capacity is estimated to be around 132 MW. Since the regions main power generator South Africa is experiencing its own problems with undercapacity blackouts are a problem. A plan to boost Morupule station with four new 150 MW units is underway and gathering financial support from several sources.

The Uganda Electricity Generation Company Limited (UEGCL) is a parastatal company whose primary purpose is to generate electric power for use in Uganda and for sale to neighboring countries. As of December 2017, UEGL's generation capacity was 380 megawatts, with that capacity planned to increase to over 1,300 megawatts, by 2023.

Companies and Intellectual Property Authority (CIPA) is Botswana's registrar of companies and is a government parastatal. It falls under the Ministry of Trade and Industry. All forms of companies are incorporated and registered with CIPA and file specific details as required by the current Companies and Intellectual Property Authority Act. All registered limited companies, including subsidiary, small and inactive companies, must file annual financial statements in addition to annual company returns. Registering of companies is now done online since the introduction of online business registration system launched by Bogolo Kenewendo.

Botswana Unified Revenue Service (BURS) is the revenue service and a government parastatal of the Botswana government. BURS is responsible for collecting taxes and administering the BURS Act. The duties of the BURS include providing tax assistance to taxpayers and pursuing and resolving instances of erroneous or fraudulent tax filings.

Botswana Fibre Networks (BOFINET) is the wholesale provider of national and international telecommunication infrastructure in Botswana formed formed in 2012 to focus on and improve the backbone network and internet infrastructure of Botswana.

Rose Seretse is the CEO of the Botswana Energy Regulatory Authority. She previously was the Director General of the Botswana Directorate on Corruption and Economic Crime from 2009 until 2017. She has represented Botswana internationally for anti-corruption initiatives.