The Botswana Prison Service (BPS) is the corrections agency of Botswana. It holds pre-trial and convicted prisoners. [1]

Molepolole is a large town in Kweneng District, Botswana. 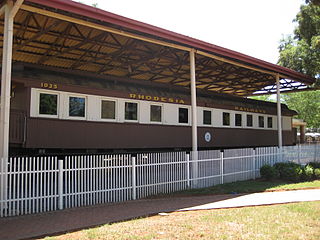 Botswana Railways (BR) is the national railway of Botswana.

Yarona FM is a Botswana FM radio based in Gaborone with a core broadcast audience of youth, with a spill out to ages 35. The network plays a relatively freeform mix of indie music, including rock, pop, alternative hip hop, motswako and electronic music.

Bechuanaland National Airways was the national airline of the Bechuanaland Protectorate and was based in Francistown.

The Water Utilities Corporation (WUC) is a government-owned corporation that provides water and waste water management services in Botswana. The Board is appointed by the Minister of Minerals, Energy and Water Resources. The water supply is critically important in the arid or semi-arid environment of Botswana.

The Dutch Reformed Church in Botswana was founded by Swiss missionaries led by Rev. Henri Gronin begun working in 1863 among the tribe Bakgatla, Kgafela in Saulsport and Rustenburg in South Africa. In 1870 part of the tribe moved north to Botswana and the missionaries followed them. The great chief was baptised and most of the tribe followed him. In 1966 when Botswana become independent, a Synod of the Reformed Church was formed. In the 1970s the church gained independence. The church in the following years expanded to Basarwa, Bakalanga and Bakgatla.

The Baháʼí Faith in Botswana begins after ʻAbdu'l-Bahá, then leader of the Baháʼí Faith, wrote letters encouraging taking the religion to Africa in 1916. The first Baháʼí pioneers arrived in Botswana about October 1954, where they befriended many Africans. The first election of Botswana's Baháʼí National Spiritual Assembly was in 1970. The 2001 national census counts approximately 700 Baháʼís. However, the Association of Religion Data Archives estimated some 16,500 Baháʼís in Botswana as of 2010.

Dumelang Saleshando is a politician from Botswana who is the Leader of the Opposition of Botswana.

Radio Botswana- abbr RB1 is a radio station in Botswana operated by the Government of Botswana in the capital city Gaborone. The Radio station provides news, current affairs about the country Botswana, the culture of Botswana, education and also provides entertainment to its followers. Radio Botswana station 1 started diffusing to its crowd in the year 1965 and during that time it was initially called the Radio Bechuanaland before the country became independent. During the time it was called Radio Bechuanaland, the station got assistance of wave transmition from the Mafikeng Veterinary, and it served the department with communication covering a circle of 20 miles. The partnership between the Mafikeng veterinary and radio Bechuanaland was to broadcast the agricultural agenda/programmes.
Radio Bechuanaland from the year 1967 was on air at a band of 90 meters every night. The station is called Seroma mowa sa Botswana in Setswana language.

The Ministry of Tertiary Education, Research, Science and Technology is a government ministry of Botswana.