Botswana Fibre Networks (BOFINET) is the wholesale provider of national and international telecommunication infrastructure in Botswana formed in 2012 to focus on and improve the backbone network and internet infrastructure of Botswana. [1] [2] [3]

Botswana Fibre Networks was formed in 2012 when the Government of Botswana repealed the Botswana Telecommunications Corporation Act to open the market to competition and as they were preparing BTC for initial public offering and to break its monopoly. As a result, the government established Botswana Fibre Networks (BoFiNet) to manage and operate long-distance transmission networks and become a provider to BTC, Mascom, Verbosec, Orange Botswana and other internet service providers. Some of BTC assets were transferred to BoFiNet to enable it to deliver on its mandate. [4] [5] BTC investment in EASSy and West Africa Cable System was transferred to Botswana Fibre Networks as part of the transition.

Telecommunications in Kenya include radio, television, fixed and mobile telephones, and the Internet. 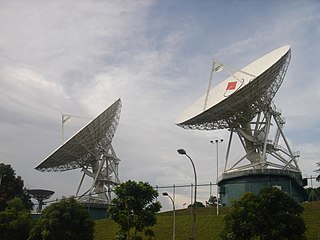 There are a number of systems of communication in Uganda, including a system of telephony, radio and television broadcasts, internet, mail, and several newspapers. The use of phones and the internet in Uganda has rapidly increased in the last few years. 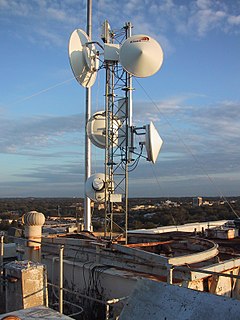 BTC is the primary telecommunications provider for the Bahamas, headquartered in Nassau, New Providence. It is partly government owned and offers telephone, internet and wireless services.

The Internet in Africa is limited by a lower penetration rate when compared to the rest of the world. Measurable parameters such as the number of ISP subscriptions, overall number of hosts, IXP-traffic, and overall available bandwidth all indicate that Africa is far behind the "digital divide". Moreover, Africa itself exhibits an inner digital divide, with most Internet activity and infrastructure concentrated in South Africa, Morocco, Egypt as well as smaller economies like Mauritius and Seychelles.

The Internet in Zimbabwe has seen rapid expansion in recent years. The Internet country code top-level domain is .zw. In 2009, the Mugabe-Tsvangirai Government of National Unity established a Ministry of Information and Communications Technology to focus on ICT growth and development.

Telecommunications in Guyana include radio, television, fixed and mobile telephones, and the Internet. Early telecommunications were owned by large foreign firms until the industry was nationalized in the 1970s. Government stifled criticism with a tight control of the media, and the infrastructure lagged behind other countries, Guyana Telephone and Telegraph Company (GT&T) holding a monopoly on most such services. In a 2012 census report on Guyanese households, 55.5% had a radio, 82.7% had a television, 27.8% had a personal computer, and 16.2% had internet at home, 49.3% had a telephone landline, and 70.6% had a cellular phone. 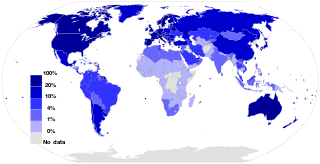 Broadband is a term normally considered to be synonymous with a high-speed connection to the internet. Suitability for certain applications, or technically a certain quality of service, is often assumed. For instance, low round trip delay would normally be assumed to be well under 150ms and suitable for Voice over IP, online gaming, financial trading especially arbitrage, virtual private networks and other latency-sensitive applications. This would rule out satellite Internet as inherently high-latency. In some applications, utility-grade reliability or security are often also assumed or defined as requirements. There is no single definition of broadband and official plans may refer to any or none of these criteria.

Botswana Telecommunications Authority (BTA) is a dissolved independent commission that was responsible for regulating all matters related to telecommunications, postal services of Botswana and has been succeeded by Botswana Communication Regulatory Authority. The Minister appoints all five board members, who serve on a part-time basis. The BTA is mandated to promote the development and provision of efficient telecommunications and broadcasting services in Botswana, under the terms of the Telecommunications Act 15 of 1996. There have been legal disputes between the BTA and licensed operators, springing from issues related to interconnection and pricing.

BharatNet, also known as Bharat Broadband Network Limited, is a government-owned telecom infrastructure provider, set up by the Department of Telecommunications, a department of Ministry of Communications of the Government of India for the establishment, management, and operation of the National Optical Fibre Network to provide a minimum of 100 Mbit/s broadband connectivity to all 250,000-gram panchayats in the country, covering nearly 625,000 villages, to improve telecommunications in India and reach the campaign goal of Digital India. The last mile connectivity, with a total of 700,000 Wi-Fi hotspots to cover all 625,000 villages of India by adding 2 to 5 Wi-Fi hotspots per gram panchayat and a minimum of one Wi-Fi hotspot per village, have been created by connecting high-speed 4G base tower stations of commercial telecom operators to BharatNet, whereby commercially non-viable Wi-Fi hotspots will be subsidized by the union government grant of ₹36 billion to sustain the operation. The government has discounted the bulk BharatNet bandwidth rates to the commercial telecom operators by 76% to enable them to offer the highly discounted, affordable, competitive, and commercially viable BharatNet-enabled wireless cellular 4G broadband deals to the rural customers. The ₹450 billion union government share of funding will come from the Universal Services Obligation Fund of the Department of Telecommunications. It will be rolled out with the additional funding by state governments to connect all gram panchayats in India. BharatNet is the world's largest rural broadband connectivity program. It is built under the Make in India initiative with no involvement of foreign companies.

Mascom Wireless Proprietary Limited, is a Botswana mobile telecommunications company. Its head office is in Gaborone. It was established in Gaborone, Botswana in February 17, 1998.

TelOne Zimbabwe is a Telecommunications parastatal company owned by the Zimbabwe government headquartered in Harare's Central Business District. It is the largest telecoms entity in Zimbabwe and has the second largest fixed line network in Southern Africa after Telkom South Africa.

Mwampule Masule is a Motswana professional footballer who plays as a goalkeeper for the Botswana national team and is currently a free agent. He last played for Botswana Premier League club Orapa United.