This is a list of Electricity distribution companies by country.

Additionally, there are dozens of small regional companies, some of which are listed in List of Canadian electric utilities.

See also: List of companies of the Philippines § Utilities

A utility cooperative is a type of cooperative that is tasked with the delivery of a public utility such as electricity, water or telecommunications to its members. Profits are either reinvested for infrastructure or distributed to members in the form of "patronage" or "capital credits", which are dividends paid on a member's investment in the cooperative.

The State Grid Corporation of China (SGCC), commonly known as the State Grid, is a Chinese state-owned electric utility corporation. It is the largest utility company in the world, and as of 2020, the world's fourth largest company overall by revenue. In 2016/17 it was reported as having 927,839 employees, 1.1 billion customers and revenue equivalent to US$363.125 billion.

The Electricity Act, 2003 is an Act of the Parliament of India enacted to transform the power sector in India. 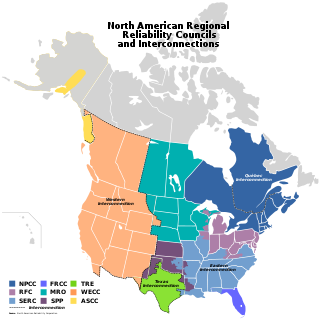 The Delhi Vidyut Board (DVB) was formed by the Government of Delhi in 1997 for the purpose of generation and distribution of power to the entire area of NCT of Delhi except the areas falling within the jurisdiction of New Delhi Municipal Council and Delhi Cantonment Board. On 1 July 2002, The Delhi Vidyut Board was unbundled into six successor companies:

R.V. Shahi is the Chairman of Energy Infratech Private Limited. He previously served as the Secretary to the Government of India in the Ministry of Power and formerly the Chairman and Managing Director of Bombay Suburban Electric Supply Limited.

Delhi Transco Limited (DTL), formerly Delhi Power Supply Company Limited (DPSCL) is the State Transmission Utility for the National Capital Territory of Delhi. It is responsible for the transmission of power at 220 kV and 400 kV level and for upgrading, operating and maintaining the high voltage network.

NTPC Limited, formerly known as National Thermal Power Corporation Limited, is an Indian government-owned electric utility company. It engaged in the business of generation of electricity and allied activities. It is a company incorporated under the Companies Act 1956 and is under the ownership of Ministry of Power, Government of India. The headquarters of the company is situated at New Delhi. NTPC's core business is the generation and sale of electricity to state-owned power distribution companies and State Electricity Boards in India. The company also undertakes consultancy and turnkey project contracts that involve engineering, project management, construction management, and operation and management of power plants.

Dakshin Haryana Bijli Vitran Nigam, also known as DHBVN is an Indian state-owned power distribution utility company. It is owned by Government of Haryana and its headquarter is located in Hisar city of Haryana, India.It has two Operation Zones namely Hisar and Delhi. Each zone is headed by Chief Engineer. Both Zones have Operation circles namely Hisar, Sirsa, Fatehabad, Jind and Bhiwani in Hisar Zone and Gurugram-I, Gurgugram-II, Faridabad, Palwal, Rewari and Narnaul in Delhi Zone. Each circle is headed by Superintending Engineer.

Uttar Pradesh Power Corporation Limited (UPPCL) is the company responsible for electricity transmission and distribution within the Indian state of Uttar Pradesh. The incumbent chairman is Shri M. Devraj.

Tata Power Delhi Distribution Limited (TPDDL), formerly North Delhi Power Limited(NDPL), is a joint venture between the Government of NCT of Delhi and Tata Power Company Limited, which holds a 51% majority stake in the venture.