Řečany nad Labem is a village in the Pardubice Region of the Czech Republic. It has around 1,350 inhabitants.

Jan Louwers Stadion is a multi-use stadium in the Eindhoven borough of Stratum, Netherlands.

Martin Township is located in McLean County, Illinois. As of the 2010 census, its population was 1,289 and it contained 538 housing units.

Oberseen is a quarter in the district 3 of Winterthur.

Tinabdher is a town in northern Algeria.

Saralanj is a village in the Shirak Province of Armenia.

Zawada is a village in the administrative district of Gmina Ostrówek, within Lubartów County, Lublin Voivodeship, in eastern Poland. It lies approximately 6 kilometres (4 mi) north of Ostrówek, 18 km (11 mi) north of Lubartów, and 42 km (26 mi) north of the regional capital Lublin.

Yerfi is a village and municipality in the Quba Rayon of Azerbaijan. It has a population of 915. The municipality consists of the villages of Yerfi, Talış, Dərk, Qayadalı, and Nohurdüzü.

Samotnik is a village in the administrative district of Gmina Zgierz, within Zgierz County, Łódź Voivodeship, in central Poland. It lies approximately 6 kilometres (4 mi) north-east of Zgierz and 11 km (7 mi) north of the regional capital Łódź.

Nowiny Kryszkowskie is a village in the administrative district of Gmina Wierzbinek, within Konin County, Greater Poland Voivodeship, in west-central Poland.

Rozgity is a village in the administrative district of Gmina Dywity, within Olsztyn County, Warmian-Masurian Voivodeship, in northern Poland.

Keskküla is a village in Märjamaa Parish, Rapla County in western Estonia.

Pöitse is a village in Saaremaa Parish, Saare County in western Estonia.

Carnisserbuurt is a neighborhood of Rotterdam, Netherlands.

Chiwan station is the southwest terminal metro station on Line 2 of the Shenzhen Metro, the eastern one being Xinxiu station in Luohu District. It opened on 28 December 2010. The Line 5 platforms opened on 28 September 2019.

Archaeological Museum is an archaeology museum based in Harappa, Punjab, Pakistan. It was established in 1926 and then in 1966 its building was constructed by the Government of Pakistan.

Atatürk Monument is a statue depicting Mustafa Kemal Atatürk, the founder of the Republic of Turkey, in Mersin, Turkey. 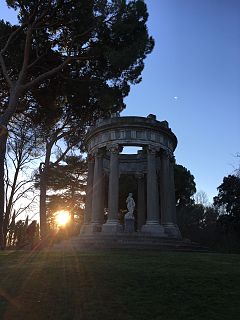 Alameda de Osuna is a ward (barrio) of Madrid belonging to the district of Barajas.