A bullring is an arena where bullfighting is performed. Bullrings are often associated with the Iberian Peninsula, but they can also be found through Iberian America and in a few Spanish and Portuguese ex-colonies in Africa. Bullrings are often historic and culturally significant centres that bear many structural similarities to the Roman amphitheatre.

The classic bullring is an enclosed, roughly circular amphitheatre with tiered rows of stands that surround an open central space. The open space forms the arena or ruedo, a field of densely packed crushed rock ( albero ) that is the stage for the bullfight. Also on the ground level, the central arena is surrounded by a staging area where the bullfighters prepare and take refuge, called the callejón (alley). The callejón is separated from the arena by a wall or other structure, usually made of wood and roughly 140 cm high. The partition wall has doors for the entrance and exit of the bull (puerta de los toriles) and human participants (puerta de cuadrilla), although the form, number, and placement of these doors will vary from one bullring to another. In regular places, the wall is pushed outwards leaving splits (burladero, from burlar: to evade, to dodge) that allow the bullfighters to go in the arena and to take refuge but are too narrow for the bull. Nevertheless, on rare occasions the bull jumps the wall causing havoc in the corridor. The walls also have a type of stirrup or foothold that aids in crossing over to the central arena, and sometimes stirrups on the arena side as well; these are used mostly by event staff if they need to intervene quickly in the case of an emergency. The arena is surrounded by climbing rows of seats. The seats are priced differently according to the position of the sun during the show, normally in the afternoon. The hot sol, "sun", is cheaper than the fresher sombra, "shade".

Bullrings evolved as specialized sporting arenas hand-in-hand with the sport that demanded them. Many of the ancient Roman amphitheatres had characteristics that can be seen in the bullrings of today (in fact the ring in Nîmes, France, is a Roman artifact, though it is more elliptical than the usual plaza), and the origin of bullfighting is very closely related to certain Roman traditions; in the formative years of the sport on the Iberian Peninsula, those Roman enclosures were not commonly utilised for bullfighting events. Back when bullfighting festivals were conducted principally on horseback, the spectacle was a more public affair that took place in the city's open plaza area. It was only later, when bullfights were conducted principally by men on foot, that the public needed a structure to house them appropriately. Not only did the crowd need special seating to view the spectacle, they also needed a structure to contain the general disorder that reigned at festivals during the heyday of such legendary figures as Costillares, Pedro Romero, and Pepe-Hillo.

In these early days, the circular form was not to be taken for granted. When La Maestranza bullring in Seville was authorized for construction in 1730 specifically to house bullfights, the original plans called for a rectangular arena for the first three years, only later to be changed to a circular form that avoided the cornering of the action and put all viewers at the same approximate distance, the same reason for the elliptical form of amphitheatres. Another circular plaza was begun in Ronda in 1754, and it featured its first bullfights in 1782.

In the change from the 19th to the 20th century, the Neo-Mudéjar style became in vogue for plazas, involving decoration in visible brickwork.

Since the 1990s, new construction technology allows some rings to be covered permanently or temporarily.

The primary purpose of the ring is bullfighting, but it is usually limited to some festival weeks in the year. In other times, it may be used as a concert venue as in the Rock en el ruedo tour of Miguel Ríos or the live record Diamonds & Rust in the Bullring , featuring a Joan Baez concert in the Bilbao plaza.

Before the diffusion of modern sports premises, bullrings were used in the Basque Country for traditional sports similar to challenges of resistance running. The public made bets on the number of laps the runner could make. No bulls were involved.

After the battle of Badajoz (1936) of the Spanish Civil War, the Badajoz ring was used as a confinement camp for supporters of the republic and many thousands were executed there by the Nationalist forces who had just occupied the town.

Most indoor bullrings, especially in Mexico and elsewhere in Latin America, in addition to being used for concerts, have also been used for indoor sports such as basketball, ice hockey, boxing and lucha libre.

Bullrings of the world

The most famous bullrings in the world are Plaza de Toros de Las Ventas in Madrid (Spain), widely regarded as the most prestigious one, La Maestranza in Seville (Spain), and Plaza de Toros México in Mexico City.[ citation needed ]

Villages round the Camargue, such as Rodilhan in the Gard, who also practise 'mise à mort' - killing the bull.

The plaza de toros de Las Ventas, known simply as Las Ventas, is the largest bullfighting ring in Spain, located in the Guindalera quarter of the Salamanca district. It was inaugurated on June 17, 1931. Its seating capacity of 23,798, makes it the third-largest bullfighting run the world, adjacent to bullrings in Mexico and Venezuela, respectively. 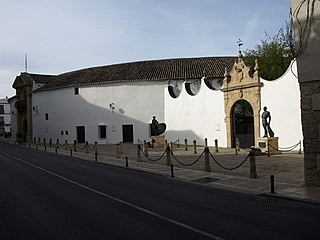 The Plaza de Toros de Ronda is a Bullring in Ronda, it has a diameter of 66 metres (217 ft), surrounded by a passage formed by two rings of stone. There are two layers of seating, each with five raised rows and 136 pillars that make up 68 arches. The Royal Box has a sloping roof covered in Arabic tiles. The design of the main entrance to the bull ring features two Tuscan columns and the royal shield of Spain surround by baroque edging. The main door is large enough to allow horses and carriages to enter the ring, and above the door is an iron wrought balcony that embodies the bullfighting culture. 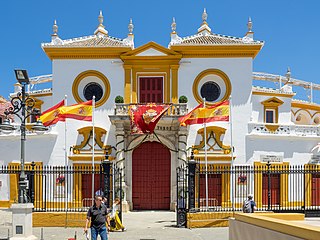 The Plaza de toros de la Real Maestranza de Caballería de Sevilla is a 12,000-capacity bullring in Seville, Spain. During the annual Seville Fair in Seville, it is the site of one of the most well-known bullfighting festivals in the world. It is a part of the Real Maestranza de Caballería de Sevilla, a noble guild established for traditional cavalry training. 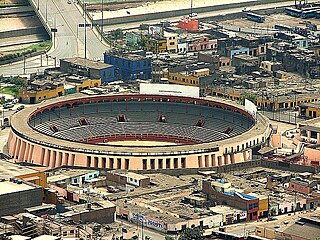 The Plaza de Torosde Acho is the premier bullring in Lima, Peru. Located beside the historical center of the Rímac District, the plaza is classified as a national historic monument. It is the oldest bullring in the Americas and the second-oldest in the world after La Maestranza in Spain. It opened on 30 January 1766. 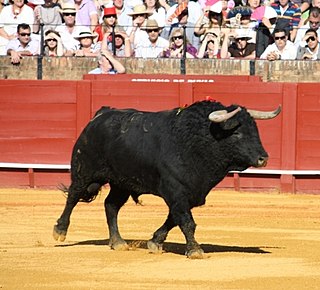 The Spanish Fighting Bull is an Iberian heterogeneous cattle population. It is exclusively bred free-range on extensive estates in Spain, Portugal, France and Latin American countries where bull fighting is organized. Fighting bulls are selected primarily for a certain combination of aggression, energy, strength, and stamina. During the breeding, in order to preserve their natural characteristics, the bulls rarely encounter human beings, and if ever, never on foot.

Plaza Monumental de toros de Pueblo Nuevo is a Bullring in San Cristóbal, Venezuela, currently used for bull fighting. The stadium can hold up to 15,000 people and was built in 1967. 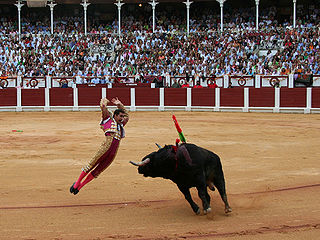 Spanish-style bullfighting is a type of bullfighting that is practiced in Spain, Mexico, Colombia, Ecuador, Venezuela, Peru, as well as in parts of southern France and Portugal. This style of bullfighting involves a physical contest with humans attempting to publicly subdue, immobilize, or kill a bull. The most common bull used is the Spanish Fighting Bull, a type of cattle native to the Iberian Peninsula. This style of bullfighting is seen to be both a sport and performance art. The red colour of the cape is a matter of tradition – bulls are color blind. They attack moving objects; the brightly-colored cape is used to mask blood stains.

Plaza de Toros de Valencia, officially Plaça de bous de València, is a bullring in València, Spain. It was built between 1850 and 1859 in the neoclassical style, inspired by civil Roman architecture such as the Colosseum in Rome or the Arena of Nîmes (France). It was built by the Valencian architect Sebastián Monleón Estellés. Its structure is formed by a 48-sided polygon, with 384 external arches. It follows the so-called Neo-Mudéjar style. 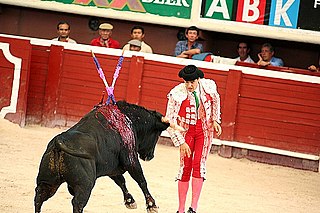 Bullfighting is a physical contest that involves a bullfighter and animals attempting to subdue, immobilize, or kill a bull, usually according to a set of rules, guidelines, or cultural expectations.

Feria del Sol, or Carnaval Taurino de America, is an international cultural festival held in the city of Mérida, Venezuela every February of the year. The Feria festival is held alongside the carnival feast. The festival includes bull competitions, cultural expositions, commercial and zootechnic expositions, concerts, parades, sports, and a voting competition for La Reina Del Sol.

Bullfighting was banned in the Spanish autonomous community of Catalonia by a vote of the Catalan Parliament in July 2010. The ban came into effect on January 1, 2012. The last bullfight in the region took place in Barcelona in September 2011.

The Plaza de Toros Monumental de Barcelona, often known simply as La Monumental, is a bullring in the city of Barcelona, Catalonia, Spain. It was the last bullfighting arena in commercial operation in Catalonia. It was inaugurated in 1914 under the name Plaza de El Sport and was soon expanded and given its current name in 1916. It is situated at the confluence of the Gran Via and Carrer Marina in the Eixample district. It had a capacity of 19,582 within 26 rows of lines, boxes, and stands on the first floor inside and an upper gallery surrounding the building.

José Humberto Eslava "Pepe" Cáceres was a Colombian bullfighter. Born in Honda, Tolima, Colombia, he is often regarded as one of the finest bullfighters ever and the best-known bullfighter Colombia has ever produced. He was also a breeder of bulls and bullfighting organizer.

Póvoa de Varzim Bullfighting Arena is a bullring in Póvoa de Varzim, Portugal. It is located on Avenida Vasco da Gama, on the northern waterfront of the city. Bullfighting, horse shows, and concerts are held in the arena. 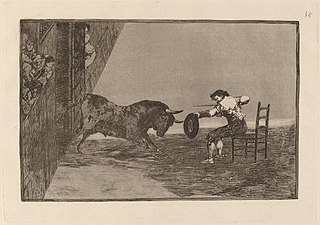 La Tauromaquia (Bullfighting) is a series of 33 prints created by the Spanish painter and printmaker Francisco Goya, which was published in 1816. The works of the series depict bullfighting scenes. There are also seven extra prints that were not published in the original edition.

The Nazaré bullring is situated on the west coast of Portugal in the village of Sitio in Nazaré, Leiria District. The present bullring was built in 1897 in neo-Arab style and continues to be used for bullfights and other entertainment. An earlier bullring was destroyed by fire. 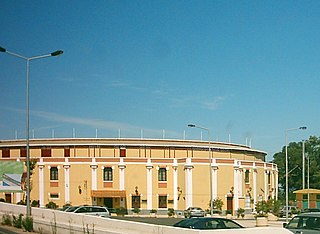 The Vila Franca de Xira Bullring, also known as the Palha Blanco Bullring is situated in the centre of the town of Vila Franca de Xira in the municipality of the same name in the Lisbon District of Portugal. It was built in 1901, is still used and is one of the eight “First Category” bullrings in the country.

Hilda Eliana Tenorio Patiño is a Mexican bullfighter and matador. She was the first woman to receive her alternativa in the Plaza de Toros México, the largest bullring in the world, aged 24. Tenorio completed her alternativa on February 28, 2010. She has been an outspoken advocate of feminism in the sport. She is the third Mexican woman to attain the rank of matador.

Albufeira Bullring is a bullring in Albufeira, Portugal. Bullfighting, horse shows, and concerts were held in the arena until 2019. In 2021 it was sold with plans to no longer hold bullfights but to renovate the structure. This was following a failed attempt by the PAN group in 2020 to purchase the arena.