A CAS Registry Number, [1] also referred to as CAS RN [2] or informally CAS Number, is a unique numerical identifier assigned by the Chemical Abstracts Service (CAS), US to every chemical substance described in the open scientific literature. It includes all substances described from 1957 through the present, plus some substances from as far back as the early 1800s. [3] It is a chemical database that includes organic and inorganic compounds, minerals, isotopes, alloys, mixtures, and nonstructurable materials (UVCBs, substances of unknown or variable composition, complex reaction products, or biological origin). [4] CAS RNs are generally serial numbers (with a check digit), so they do not contain any information about the structures themselves the way SMILES and InChI strings do.

The registry maintained by CAS is an authoritative collection of disclosed chemical substance information. It identifies more than 182 million unique organic and inorganic substances and 68 million protein and DNA sequences, [3] plus additional information about each substance. It is updated with around 15,000 additional new substances daily. [5] A collection of almost 500 thousand CAS registry numbers are made available under a CC-BY-NC license at ACS Commons Chemistry. [6]

Historically, chemicals have been identified by a wide variety of synonyms. Frequently these are arcane and constructed according to regional naming conventions relating to chemical formulae, structures or origins. Well-known chemicals may additionally be known via multiple generic, historical, commercial, and/or (black)-market names.

CAS Registry Numbers (CAS RN) are simple and regular, convenient for database searches. They offer a reliable, common and international link to every specific substance across the various nomenclatures and disciplines used by branches of science, industry, and regulatory bodies. Almost all molecule databases today allow searching by CAS Registry Number.

A CAS Registry Number has no inherent meaning but is assigned in sequential, increasing order when the substance is identified by CAS scientists for inclusion in the CAS REGISTRY database.

A CAS RN is separated by hyphens into three parts, the first consisting from two up to seven digits, [7] the second consisting of two digits, and the third consisting of a single digit serving as a check digit. This format gives CAS a maximum capacity of 1,000,000,000 unique s.

To find the CAS number of a compound given its name, formula or structure, the following free resources can be used:

The Merck Index is an encyclopedia of chemicals, drugs and biologicals with over 10,000 monograph on single substances or groups of related compounds published online by the Royal Society of Chemistry.

Mercury(II) oxide, also called mercuric oxide or simply mercury oxide, is the inorganic compound with the formula HgO. It has a red or orange color. Mercury(II) oxide is a solid at room temperature and pressure. The mineral form montroydite is very rarely found.

The Beilstein database is the largest database in the field of organic chemistry, in which compounds are uniquely identified by their Beilstein Registry Number. The database covers the scientific literature from 1771 to the present and contains experimentally validated information on millions of chemical reactions and substances from original scientific publications. The electronic database was created from Handbuch der Organischen Chemie, founded by Friedrich Konrad Beilstein in 1881, but has appeared online under a number of different names, including Crossfire Beilstein. Since 2009, the content has been maintained and distributed by Elsevier Information Systems in Frankfurt under the product name "Reaxys".

PubChem is a database of chemical molecules and their activities against biological assays. The system is maintained by the National Center for Biotechnology Information (NCBI), a component of the National Library of Medicine, which is part of the United States National Institutes of Health (NIH). PubChem can be accessed for free through a web user interface. Millions of compound structures and descriptive datasets can be freely downloaded via FTP. PubChem contains multiple substance descriptions and small molecules with fewer than 100 atoms and 1,000 bonds. More than 80 database vendors contribute to the growing PubChem database.

The European Community number is a unique seven-digit identifier that was assigned to substances for regulatory purposes within the European Union by the European Commission. The EC Inventory comprises three individual inventories, EINECS, ELINCS and the NLP list. 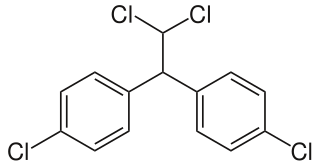 Dichlorodiphenyldichloroethane (DDD) is an organochlorine insecticide that is slightly irritating to the skin. DDD is a metabolite of DDT. DDD is colorless and crystalline; it is closely related chemically and is similar in properties to DDT, but it is considered to be less toxic to animals than DDT. The molecular formula for DDD is (ClC6H4)2CHCHCl2 or C14H10Cl4, whereas the formula for DDT is (ClC6H4)2CHCCl3 or C14H9Cl5.

The Hazardous Substances Data Bank (HSDB) is a toxicology database on the U.S. National Library of Medicine's (NLM) Toxicology Data Network (TOXNET). It focuses on the toxicology of potentially hazardous chemicals, and includes information on human exposure, industrial hygiene, emergency handling procedures, environmental fate, regulatory requirements, and related areas. All data are referenced and derived from a core set of books, government documents, technical reports, and selected primary journal literature. Prior to 2020, all entries were peer-reviewed by a Scientific Review Panel (SRP), members of which represented a spectrum of professions and interests. Last Chairs of the SRP are Dr. Marcel J. Cassavant, MD, Toxicology Group, and Dr. Roland Everett Langford, PhD, Environmental Fate Group. The SRP was terminated due to budget cuts and realignment of the NLM.

Poly(ethyl methacrylate) (PEMA) is a hydrophobic synthetic acrylate polymer. It has properties similar to the more common PMMA, however it produces less heat during polymerization, has a lower modulus of elasticity and an overall softer texture. It may be vulcanized using lead oxide as a catalyst and it can be softened using ethanol.

Erbium phosphide is a binary inorganic compound of erbium and phosphorus with the chemical formula ErP.