The cardueline finches are a subfamily, Carduelinae, one of three subfamilies of the finch family Fringillidae, the others being the Fringillinae and the Euphoniinae. The Hawaiian honeycreepers are now included in this subfamily. [1] Except for the Hawaiian honeycreepers which underwent adaptive radiation in Hawaii and have evolved a broad range of diets, cardueline finches are specialised seed eaters, and unlike most passerine birds, they feed their young mostly on seeds, which are regurgitated. [2] Besides this, they differ from the other finches in some minor details of their skull. [2] They are adept at opening seeds and clinging to stems, unlike other granivorous birds, such as sparrows and buntings, which feed mostly on fallen seeds. [3] Some members of this subfamily are further specialised to feed on a particular type of seed, such as cones in the case of crossbills. [2] Carduelines forage in flocks throughout the year, rather than keeping territories, and males defend their females rather than a territory or nest. [4]

The Carduelinae subfamily contains 186 species divided into 49 genera. Of the 186 species, 15 are now extinct; these are the Bonin grosbeak and 14 Hawaiian honeycreepers. [8] 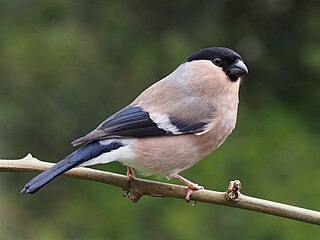 The true finches are small to medium-sized passerine birds in the family Fringillidae. Finches have stout conical bills adapted for eating seeds and nuts and often have colourful plumage. They occupy a great range of habitats where they are usually resident and do not migrate. They have a worldwide distribution except for Australia and the polar regions. The family Fringillidae contains more than two hundred species divided into fifty genera. It includes species known as siskins, canaries, redpolls, serins, grosbeaks and euphonias.

The European goldfinch or simply the goldfinch is a small passerine bird in the finch family that is native to Europe, North Africa and western and central Asia. It has been introduced to other areas, including Australia, New Zealand and Uruguay. 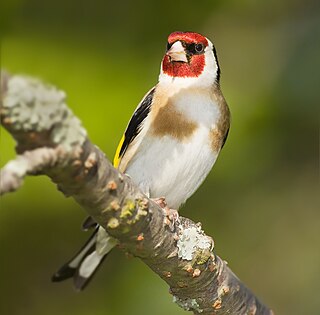 The genus Carduelis is a group of birds in the finch family Fringillidae. 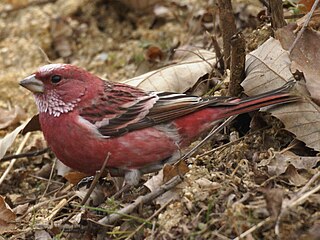 The rosefinches are a genus, Carpodacus, of passerine birds in the finch family Fringillidae. Most are called "rosefinches" and as the word implies, have various shades of red in their plumage. The common rosefinch is frequently called the "rosefinch". The genus name is from Ancient Greek karpos, "fruit" and dakno, "to bite". 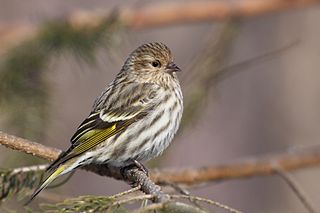 The pine siskin is a North American bird in the finch family. It is a migratory bird with an extremely sporadic winter range. 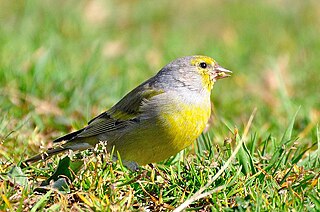 The citril finch, also known as the Alpine citril finch, is a small songbird, a member of the true finch family, Fringillidae. For a long time, this cardueline finch was placed in the genus Serinus, but it is apparently very closely related to the European goldfinch.

Grosbeak is a form taxon containing various species of seed-eating passerine birds with large beaks. Although they all belong to the superfamily Passeroidea, these birds are not part of a natural group but rather a polyphyletic assemblage of distantly related songbirds. Some are cardueline finches in the family Fringillidae, while others are cardinals in the family Cardinalidae; one is a member of the weaver family Ploceidae. The word "grosbeak", first applied in the late 1670s, is a partial translation of the French grosbec, where gros means "large" and bec means "beak".

The British finches are made up of several species of finch which were formerly very popular as cage birds in Great Britain. They are not currently commonplace, but are still kept by a few dedicated fanciers. 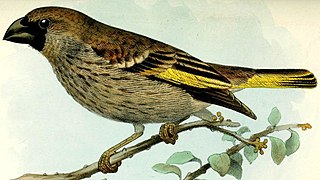 The genus Rhynchostruthus is a small group of finches in the family Fringillinae. Commonly known as golden-winged grosbeaks, they are attractive, chunky, medium-sized, robust-billed songbirds restricted to the southern Arabian and northern Somalian regions.

Chloridops is an extinct genus of Hawaiian honeycreeper in the subfamily Carduelinae of the family Fringillidae. 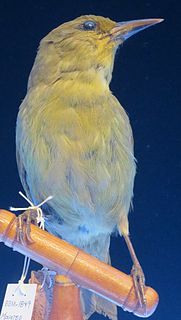 The greater ʻamakihi was a species of Hawaiian honeycreeper in the subfamily Carduelinae of the family Fringillidae.

Himatione is a genus of Hawaiian honeycreepers in the subfamily Carduelinae of the family Fringillidae.

Psittirostrini is a formerly-recognized tribe of Hawaiian honeycreepers. It was used for the finch-like honeycreepers that once inhabited all of the Hawaiian Islands. These birds are granivorous and have songs like those of non-Hawaiian cardueline finches. The only definitely extant species are the Laysan finch, the Nihoa finch, the Maui parrotbill, and the palila. Extinct species include the koa finches, the ʻōʻū, and the Lanaʻi hookbill. 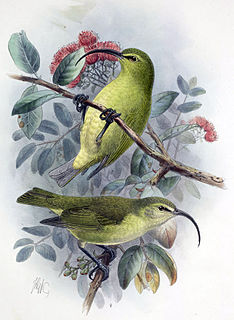 Hawaiian honeycreepers are a group of small, passerine birds endemic to Hawaiʻi. They are closely related to the rosefinches in the genus Carpodacus, but many species have evolved features unlike those present in any other finch. Their great morphological diversity is the result of adaptive radiation in an insular environment. Many have been driven to extinction since the first humans arrived in Hawaii, with extinctions increasing over the last 2 centuries following European discovery of the islands, with habitat destruction and especially invasive species being the main causes. 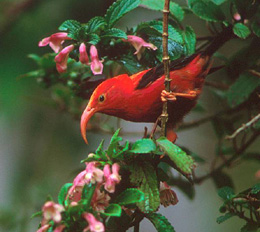 Spinus is a genus of passerine birds in the finch family. It contains the North and South American siskins and goldfinches, as well as two Old World species. The genus name is from the Ancient Greek σπίνοςspínos, a name for a now-unidentifiable bird.