Cassius was a French musical duo consisting of producers Philippe Cerboneschi and Hubert Blanc-Francard, better known as Zdar and Boombass (or sometimes Philippe Zdar and Hubert Boombass). [1] [2] [3] Under its different incarnations the duo is likened to the "French Touch" movement of electronic music in the second half of the 1990s.

Philippe Cerboneschi (French:  [filip sɛʁbɔnɛski] , Italian:  [ˈt͡ʃɛrboˈneski] ; aka Zdar), born 28 January 1967 in Aix-les-Bains and died 19 June 2019 in Paris, was a French musician, producer and sound engineer. Zdar was Dominique Blanc-Francard's assistant at studios +XXX (Plus30) when he met Boombass in 1988. Outside the Cassius group, Zdar was producer and sound engineer. He was the owner of the French recording studio Motorbass (inspired by the name of his group with Étienne de Crécy). [5] He notably recorded several albums of -M-, Phoenix and Chromeo. He also recorded for Franz Ferdinand, Beastie Boys, Lou Doillon and Sébastien Tellier among others. [6] [7] He was in a relationship with the French actress Aure Atika with whom he had a daughter (Angelica) and then with Dyane de Serigny with whom he had two other children (Pénélope and James). [8]

Zdar and Boombass started working together in 1988, producing albums for the French hip-hop artist MC Solaar. In 1991, they created their first project, called La Funk Mob, and the following year, they started to increasingly experiment with electronic sounds. Zdar's experience with electronic music was influential in his involvement with Étienne de Crécy in the project Motorbass, who released a solo full-length album, Pansoul .

In 1996, Zdar and Boombass then created "Foxxy", their first self-released house music track, under the name Cassius, and the moderate success that followed lead to them remixing tracks for acts such as Air. In January 1999, they released their first single to become a mainstream hit, "Cassius 1999". It was published by Virgin Records, and entered the UK Singles Chart at #7. [1] This was soon followed by their debut album, 1999, which had two more singles released from it, "Feeling For You" and "La Mouche". The music videos for "Cassius 1999" and "Feeling for You" portrayed the character Deadman, from DC Comics, as a DJ superhero.

2002 saw their second album release, Au Rêve . This featured the "empowered female disco" track "I'm a Woman", with Jocelyn Brown on vocals, as well as the hit single "The Sound of Violence", featuring Steve Edwards on vocals. This album also had collaborations with Wu-Tang Clan member Ghostface Killah and Leroy Burgess.

Cassius returned to the studio in 2006, for the more experimental single "Toop Toop", but the next album, titled 15 Again , featured more vocal collaborations than the duo had done with Au Rêve.

While rehearsing their 15 Again album tour, Cassius provided the community with the a cappella track of their single "Toop Toop" and encouraged fans and friends to start remixing the song. It became an immediate success: the band started the Cassius Workshop project and released more acapellas for remixing purposes. They claim to have received more than 400 remixes. [9]

Cassius's song "I <3 U So" was sampled on the track "Why I Love You" on Jay-Z and Kanye West's 2011 collaboration album Watch the Throne .

In 2016, Cassius released their fourth album, Ibifornia , with Pharrell Williams, Ryan Tedder, Cat Power, Mike D and Matthieu Chédid (as guitarist of the album) as guests. [10]

On 19 June 2019, two days before the release of Cassius's fifth album Dreems, Zdar died after falling from a 19-story building in Paris. He was 52 years old. On the release day of Dreems, the band announced that the album was the final album from Cassius. [11] [12] [13]

Following the passing of Philippe Zdar, Ed Banger and Glitterbox Recordings have come together to release the final collaborative Cassius production, with the blessing of Boombass and Zdar’s family. It's a remix of the song 'I'm Not Defeated' by Fiorous. The song was released on 21 February 2020 on limited vinyl edition. [14]

Sébastien Tellier is a French musician, singer, songwriter and multi-instrumentalist. He represented France in the Eurovision Song Contest 2008 with his song Divine. He has also produced songs for Dita Von Teese and he has composed music for the French films Narco and Steak among others. He is currently signed to Record Makers, a French independent record label. He sings in English, French and Italian.

French house, also known as French touch, filter house and tekfunk, is a style of house music originally produced by French musicians in the 1990s. It was a popular strand of the late 1990s and 2000s European dance music scene and a form of Euro disco. The defining characteristics of the sound are heavy reliance on filter and phaser effects both on and alongside samples from late 1970s and early 1980s American or European disco tracks, causing thicker harmonic foundations than the genre's descendants. Most tracks in this vein feature steady 4
4 beats with a tempo range of 110–130 beats per minute. French house tends to be confused with a genre known as future funk, although they are not the same genre. Purveyors of French house include Daft Punk, Stardust, Cassius, The Supermen Lovers, Modjo and Étienne de Crécy. 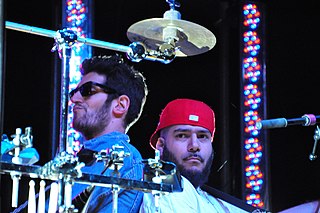 Chromeo is a Canadian electro-funk duo from Montreal, formed in 2002 by musicians David "Dave 1" Macklovitch and Patrick "P-Thugg" Gemayel. Their sound draws from blue-eyed soul, dance music, rock, synth-pop, disco and funk. As of 2018, the band has released five studio albums. 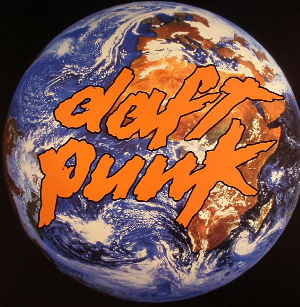 "Around the World" is a song by the French electronic music duo Daft Punk. The song was written by the duo and released as the second single from their debut studio album, Homework (1997). It became a major club hit around the world and reached number one on the dance charts in Canada, the United Kingdom, and the United States. It also peaked at number one in Iceland and Italy. The song's only lyrics are "around the world". The music video was directed by Michel Gondry and choreographed by Blanca Li. In October 2011, NME placed it at number 21 on its list "150 Best Tracks of the Past 15 Years".

Rinôçérôse is a French band founded by Jean-Philippe Freu and Patrice Carrié that mixes rock music and electronic dance music. The duo of musicians also work as psychologists, calling themselves, "Psychologists by day, musicians by night". They compose music in English, French, and German. They are based in Montpellier (Occitanie). 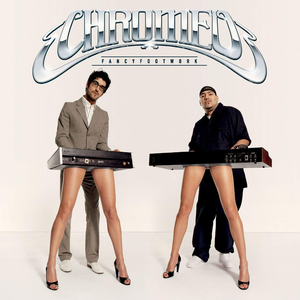 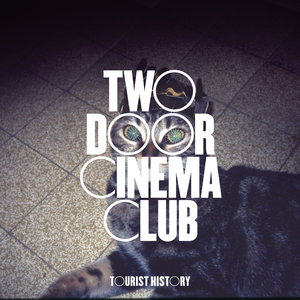 Tourist History is the debut studio album by Northern Irish indie rock band Two Door Cinema Club. It was released on 17 February 2010 by Kitsuné. The album is named for the reputation of the band's hometown, Bangor, as a tourist attraction.

Business Casual is the third studio album by Canadian electro-funk duo Chromeo, released on September 14, 2010 by Last Gang Records and Turbo Recordings. The album is Chromeo's major-label debut, following the duo's signing to Atlantic Records. Upon its release, Business Casual was met with generally positive reviews from music critics. Four singles were released from the album: "Night by Night", "Don't Turn the Lights On", "Hot Mess", and "When the Night Falls". 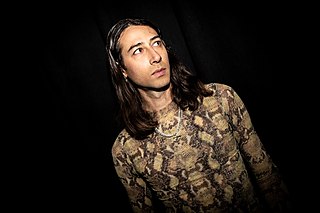 Kindness is the solo project of English singer Adam Bainbridge. 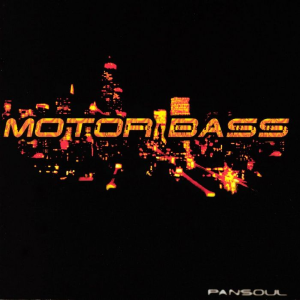 Pansoul is the sole album by French house duo Motorbass, released in July 1996 under the record label Motorbass. It was reissued in 2003. It is credited as being one of the first and most important albums in the French house genre.

Full Circle is the debut studio album of Los Angeles-based electronic music duo Oliver. It was released on August 25, 2017, via Interscope Records. It is the duo's final album, after Vaughn Oliver announced that no plans have been set for the future, and states that though he and Goldstein are on good terms, they haven't worked on music for over a year since then.

Head Over Heels is the fifth studio album by French-Canadian electro-funk duo Chromeo. It was released on June 15, 2018, via Big Beat and Atlantic Records. The album features vocals from artists such as The-Dream, French Montana, Stefflon Don, DRAM and Amber Mark, with production work from producers such as Raphael Saadiq, Rodney Jerkins and Pino Palladino.

A Bath Full of Ecstasy is the seventh studio album by English synth-pop group Hot Chip. It was released on 21 June 2019, and was co-produced by Hot Chip, Philippe Zdar, and Rodaidh McDonald, marking the first time the group worked with outside producers. The album was preceded by the singles "Hungry Child" and "Melody of Love".