Champion, as the name suggests, was formed to produce the design which Aeronca had introduced in 1946 as the 7AC Champion. By the time Aeronca ceased production in 1951, they had advanced the design through the 7BCM, 7CCM, and 7DC, reaching the 7EC. It was this model with which Champion commenced production in 1954, giving it the name "Traveler" to go along with the alphanumeric model designation. (Champion assigned both alphanumeric designations and names to most of its designs.) Though there was a great variety, all of the aircraft which Champion introduced were in one way or another related to the original Aeronca design. Champion's aircraft, by date of FAA approval or Champion introduction are:

Junkers Flugzeug- und Motorenwerke AG more commonly Junkers[ˈjʊŋkɐs], was a major German aircraft and aircraft engine manufacturer. It produced some of the world's most innovative and best-known airplanes over the course of its fifty-plus year history in Dessau, Germany. It was founded there in 1895 by Hugo Junkers, initially manufacturing boilers and radiators. During World War I, and following the war, the company became famous for its pioneering all-metal aircraft. During World War II the company produced some of the most successful Luftwaffe planes, as well as piston and jet aircraft engines, albeit in the absence of its founder, who had been removed by the Nazis in 1934.

The Fairchild PT-19 is an American Fairchild Aircraft monoplane primary trainer aircraft that served with the United States Army Air Forces, RAF and RCAF during World War II. It was a contemporary of the Kaydet biplane trainer and was used by the USAAF during Primary Flying Training. As with other USAAF trainers of the period, the PT-19 had multiple designation(s) based on the powerplant installed.

The Continental C90 and O-200 are a family of air-cooled, horizontally opposed, four-cylinder, direct-drive aircraft engines of 201 in³ displacement, producing between 90 and 100 horsepower.

De Havilland Aircraft of Canada Ltd. is an aircraft manufacturer with facilities based in the Downsview area of Toronto, Ontario, Canada. The original home of de Havilland Canada was the home of the Canadian Air and Space Museum located in what is now Downsview Park.

Aeronca, contracted from Aeronautical Corporation of America, located in Middletown, Ohio, is a US manufacturer of engine components and airframe structures for commercial aviation and the defense industry, and a former aircraft manufacturer. From 1928 to 1951, the company was a major producer of general aviation aircraft, and also produced the engines for some of their early designs.

The Continental O-170 engine is the collective military designation for a family of small aircraft engines, known under the company designation of A50, A65, A75 and A80. The line was designed and built by Continental Motors commencing in the 1940s. It was employed as the powerplant for civil and military light aircraft.

The Yellow Coach Manufacturing Company was an early manufacturer of passenger buses in the United States. Between 1923 and 1943, Yellow Coach built transit buses, electric-powered trolley buses, and parlor coaches.

The Citabria is a light single-engine, two-seat, fixed conventional gear airplane which entered production in the United States in 1964. Designed for flight training, utility and personal use, it is capable of sustaining aerobatic stresses from +5g to -2g. Its name spelled backwards, "airbatic", reflects this.

The RyanNavion is and single-engine, unpressurized, retractable gear, four-seat aircraft originally designed and built by North American Aviation in the 1940s. It was later built by Ryan Aeronautical Company and the Tubular Steel Corporation (TUSCO). The Navion was envisioned as an aircraft that would perfectly match the expected postwar boom in civilian aviation, since it was designed along the general lines of, and by the same company which produced the North American P-51 Mustang. 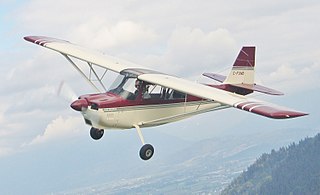 The American Champion 8KCAB Decathlon and Super Decathlon are two-seat fixed conventional gear light airplanes designed for flight training and personal use and capable of sustaining aerobatic stresses between +6g and −5g. The Decathlon entered production in the United States in 1970 as a more powerful and stronger complement to the American Champion Citabria line of aircraft. 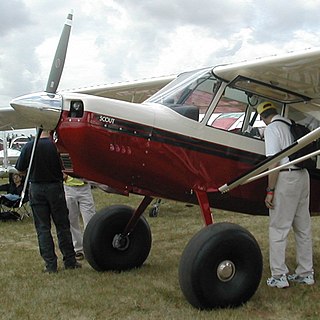 The 8GCBC Scout is a two-seat, high-wing, single-engined fixed conventional gear general aviation airplane that entered production in the United States in 1974. Designed for personal and commercial use, it is commonly found in utility roles such as bush flying—thanks to its short takeoff and landing (STOL) ability—as well as agriculture, pipeline patrol, and glider and banner towing.

The Aeronca Chief is a single-engine, two-seat, light aircraft with fixed conventional landing gear, which entered production in the United States in 1945. 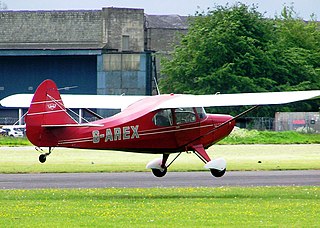 The Aeronca 15AC Sedan is a four-seat, fixed conventional gear light airplane which was produced by Aeronca Aircraft between 1948 and 1951. Designed for personal use, the Sedan also found applications in utility roles including bush flying. The Sedan was the last design that Aeronca put into production and was the largest aircraft produced by the company.

The Chengdu Aircraft Industry Group (CAIG) or Chengdu Aerospace Corporation (CAC), a subsidiary of AVIC, is a Chinese aerospace conglomerate that designs and manufactures combat aircraft and is also a manufacturer of aircraft parts. It was founded in 1958 in Chengdu, Sichuan province, China to be an aircraft supplier for the Chinese military. 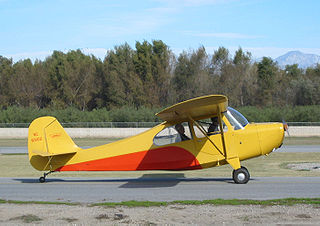 The Aeronca Model 7 Champion, commonly known as the "Champ", or "Airknocker", is a single-engine light airplane with a high wing, generally configured with fixed conventional landing gear and tandem seating for two occupants.

ArmaLite, or Armalite, is an American small arms engineering company founded in the mid 1950s in Hollywood, California. It ceased business in the 1980s. The company was revived in 1996 by Mark Westrom.

The German Air Ministry had a system for aircraft designation which was an attempt by the aviation authorities of the Third Reich to standardize and produce an identifier for each aircraft design's airframe type produced in Germany. It was in use from 1933 to 1945 though many pre-1933 aircraft were included and the system had changes over those years. As well as aircraft of the Luftwaffe, it covered civilian airliners and sport planes, due to the RLM handing all aviation-related matters in the Third Reich, both civilian and military in nature. 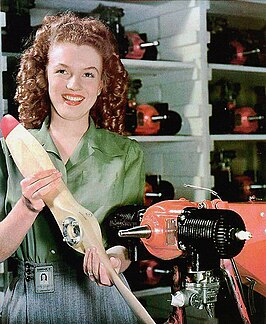 The Radioplane Company was an American aviation company that produced drone aircraft primarily for use as gunnery targets. During World War II, they produced over 9,400 of their Radioplane OQ-3 model, a propeller-powered monoplane, making it the most-used target aircraft in the US. In the post-World War II era they introduced their Radioplane BTT series, which was produced for years and eventually reached almost 60,000 examples. They also produced several radio control and self-guided missiles, the largest being the GAM-67 Crossbow, which didn't enter service. The company was purchased by Northrop Corporation in 1952, and moved to one of Northrop's factories in 1962. One of the last projects carried out at the original Radioplane factory in Van Nuys, California, was the construction of the Gemini Paraglider.