Last updated June 01, 2022
Comic publisher
For the webtoon portal, see Comico (NHN Japan).
"Next Man" redirects here. For the comic written and drawn by John Byrne, see Next Men. For the 1976 film, see The Next Man.

Comico: The Comic Company was an American comic book publisher headquartered in Norristown, Pennsylvania. Its best-known comics include the Robotech adaptations, the Jonny Quest continuation written by co-creator Doug Wildey, and Matt Wagner's Mage: The Hero Discovered and Grendel . Once considered a major contender on the American market, Comico went into bankruptcy in 1990, although it continued to sporadically publish books until 1997. In 2009, two of Comico's original founders launched an original webcomics site called CO2 Comics, which they explained was the reincarnation of Comico.

Comico was founded in 1982 [2] by a group of artists and publishers who had previously printed a local school paper called Duckwork in the Norristown area. Their first book, Primer #1, attempted to establish a large black-and-white line, featuring the premiere stories of Victor, Slaughterman, Az, Mr. Justice and Skrog. Slaughterman, Az, and Skrog made it out of the pages of Primer #1 and into their own brief titles, while Victor would continue to appear in each issue of Comico Primer.

Primer #2 would premiere what would be Comico's flagship title for most of its existence: Grendel. Matt Wagner's Grendel quickly leaped from Primer into three issues of its own black-and white-series before Comico ended its black-and-white titles in 1984 with Primer #6. Sam Kieth's character The Maxx—later to have his own Image Comics title—was first seen in Primer #5. Chuck Dixon's Evangeline debuted in Primer #6 and thereafter received its own standalone title.

The move to color

In March 1984 Comico introduced its color line of comics with:

Although an ownership dispute [3] led to Evangeline moving to First Comics to be continued for two more years, [4] Comico landed a major license in Robotech , with 1984 seeing the debut of Macross , which continued in 1985 as Robotech: The Macross Saga, along with the debut of two additional Robotech series, Robotech Masters (adapting Southern Cross ) and Robotech: The Next Generation (adapting MOSPEADA ). The three series produced a schedule that released a Robotech comic book once every two weeks, until the license for Robotech moved to Eternity Comics in 1988. Next Man debuted in 1984 and Justice Machine in 1986. Another ownership dispute led to Next Man moving to another publisher, but this was offset by Comico's acquiring Elementals from the defunct Texas Comics. [4]

Other series included The Maze Agency and Ginger Fox .

While Comico had proven to be a serious contender as a major independent comic company, a mid-1986 decision to distribute to the newsstand market doomed the company. [6] The direction significantly raised the number of prints for each issue, but also increased the number of issues being sent back that did not sell. Refunds for those returned issues ate into the publisher's budget very quickly (and, among other things, they had trouble paying their printing bills). [7] In response to this, Comico began to push out a number of new titles, aimed at spreading out the number of returned comics between various titles. In 1988 they began distributing their titles to the bookstore market, [8] and in 1989 partnered with DC Comics to distribute their comics to a wider market. [9]

Despite these measures, however, and with the end of the Mage, Grendel and Robotech series, much of the reliable revenue for the company dried up. Many of the company's long-time artists and publishers jumped ship and, by 1989, Comico had cancelled half its titles [10] and was deep into bankruptcy. Fish Police and Trollords were picked up by Apple Comics, while The Trouble with Girls was acquired by Malibu Comics [11] and Justice Machine and The Maze Agency went to Innovation Comics. Comico suspended operations in 1990, [12] with E-Man #3.

In 1990, the owners of the company sold Comico [13] [14] to Andrew Rev, who released the rest of the original staff and began working on relaunching the company. [15] [16] [17] With the planned relaunch, Rev held onto as many of the original Comico series he could.

Most significantly hit were Matt Wagner's creations Mage and Grendel. Mage II: The Hero Defined, expected out in 1989, was not published until the late 1990s. Both Comico and Wagner had jointly copyrighted Mage and Grendel, and with Comico in bankruptcy, that half of the copyright was claimed as a company asset. [18] A two-part Batman/Grendel crossover, Devil's Riddle and Devil's Masque, was written and drawn by Wagner and colored at the time of the Comico series, but was delayed by Comico's bankruptcy. It was eventually published by DC in 1993. [19] Wagner regained sole copyright of Grendel that same year, and, much later, Mage, publishing the series through Dark Horse Comics and Image Comics respectively.

While losing Wagner's characters, Rev did manage to buy Elementals for his restart. [6] [20] Comico began printing again in 1992 with various Elementals-related comics, and in 1993 flooded the market with various one-shot Elementals specials. They also created the Northstar imprint, which published material from 1991–1995.[ citation needed ] Budgetary problems and conflicts with creators over payments [21] led to the company's presses going silent again until 1995, [22] with yet another Elementals title (running three issues), and various Elementals spin-offs never making it past their first or second issues. Comico's line ended in 1997 with Elementals Sex Special vol. 2, #2, illustrated by Frank Quitely and Elementals: The Vampires Revenge #2, the second installment of a four-issue limited series starring the spin-off character Ratman, illustrated by Kelly McQuain.

In July 2009, Comico co-founders Gerry Giovinco and Bill Cucinotta announced the launch of the webcomics site CO2 Comics. [23] The site hosted several of the comics from the Comico Primer, including work by Reggie Byers, Bernie Mireault, Rich Rankin, and Neil Vokes. [14]

Grendel is a long-running series of comic books originally created by American author Matt Wagner. First published in 1982 by Comico, Wagner later moved publication of the series to Dark Horse. Originally a noir comic in the style of European titles such as Diabolik, it has evolved into, in Wagner's words, a study of the nature of aggression. In 2009, Hunter Rose was ranked as IGN's 88th-greatest villain of all time. 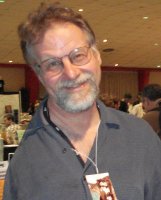 Starblaze Graphics was an imprint of The Donning Company, a publishing company established in 1978 to publish illustrated books in the United States. Notable Starblaze publications include Robert Asprin's MythAdventures series, as well as two trade paperbacks collecting the series based on the first book. Donning also published a graphic version of the Thieves' World shared world anthology series, with art by Tim Sale.

Mage is an American superhero comic book written and illustrated by Matt Wagner, which he describes as an "allegorical autobiography" in which the hero, Kevin Matchstick, is a stand-in for the author, and "[a]ll the other characters he encounters and situations he endures are metaphors from my own life... told through the lens of a fantasy adventure". Three volumes, each of 15 issues, have been published.

Evangeline is a 1980s comic book co-created and written initially by then-husband and wife team Chuck Dixon and Judith Hunt, with pencils by Hunt and inks by Ricardo Villagran. Letters were by cartoonist and letterer Ed King of the Star Wars comic strip. 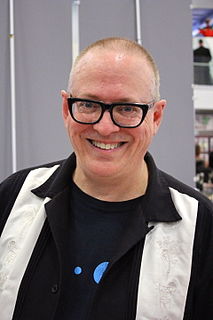 Robotech comics first officially appeared in print in 1985, though Comico published the first issue of its license from Harmony Gold USA under the Macross name.

The Justice Machine is a fictional team of superheroes originally created by Michael Gustovich and appearing in comic books from many small publishers in the 1980s and 1990s.

Texas Comics was an American independent comics company set up in 1983 by several Texas-based comic book fans, who had worked together before on the Comics Informer fanzine. Texas Comics licensed the then-popular superhero series Justice Machine from its creator Mike Gustovich after his previous publisher Noble Comics had closed. Texas Comics was operated out of the offices of the retailer Camelot Comics.

John K. Snyder III is a writer and illustrator of comic books and graphic novels. His work has been published in the pages of the underground press, most notably The Duckberg Times, and by independent comic book publishers, including Grendel for Dark Horse Comics. At DC Comics, Snyder has worked on titles such as Suicide Squad, Doctor Mid-Nite, Green Lantern, and Mister E. Snyder's latest project is as adapter/artist of the graphic novel adaptation of Lawrence Block's detective noir novel, 8 Million Ways to Die. 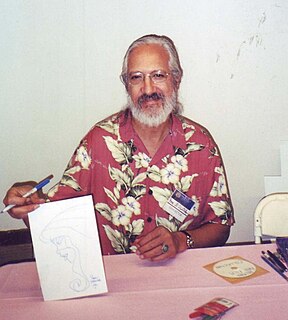 Innovation Publishing was an American comic book company based in Wheeling, West Virginia. It was co-founded by David Campiti in 1988 after writing a business proposal and raising US$400,000 to finance its launch. Innovation became #4 in market share, below Marvel Comics, DC Comics, and Dark Horse Comics.

Eternity Comics was a California-based comic book publisher active from 1986 to 1994, first as an independent publisher, then as an imprint of Malibu Comics. Eternity published creator-owned comics of an offbeat, independent flavor, as well as some licensed properties. One of its most notable titles was Ex-Mutants. Eternity was also notable for reprinting foreign titles, and introducing Cat Claw, The Jackaroo, and the Southern Squadron to the U.S. market.

Diana Schutz is a Canadian-born comic book editor, serving as editor in chief of Comico during its peak years, followed by a 25-year tenure at Dark Horse Comics. Some of the best-known works she has edited are Frank Miller's Sin City and 300, Matt Wagner's Grendel, Stan Sakai's Usagi Yojimbo, and Paul Chadwick's Concrete. She was known to her letter-column readers as "Auntie Dydie". She was an adjunct instructor of comics history and criticism at Portland Community College. 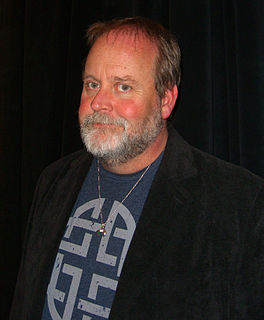 Robert Schreck is an American comic book writer and editor. Schreck is best known for his influential role as editor and marketing director at Dark Horse Comics in the 1990s, co-founding Oni Press, and for his subsequent stint as editor for DC Comics. He is currently the Deputy Director of the Comic Book Legal Defense Fund. 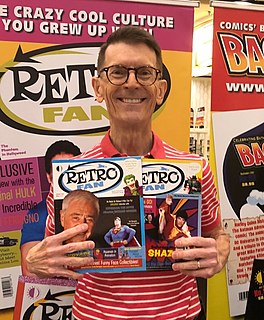