In mathematics, a cross-cap is a two-dimensional surface in 3-space that is one-sided and the continuous image of a Möbius strip that intersects itself in an interval. In the domain, the inverse image of this interval is a longer interval that the mapping into 3-space "folds in half". At the point where the longer interval is folded in half in the image, the nearby configuration is that of the Whitney umbrella.

The interval of self intersection precludes the cross-cap from being homeomorphic to the Möbius strip, but there are only two points in the image (the endpoints of the interval of self-intersection) where the image cannot be that of an immersion. The bounding edge of a cross-cap is a simple closed loop. Like certain versions of the Möbius strip, it may take the form of a symmetrical circle.

A cross-cap that has been closed up by gluing a disc to its boundary is a model of the real projective plane P2 (again with an interval of self-intersection, and two points where this model is not an immersion of P2).

Two cross-caps glued together at their boundaries form a model of the Klein bottle, this time with two intervals of self-intersection and four points where this model is not an immersion.

An important theorem of topology, the classification theorem for surfaces, states that each two-dimensional compact manifold without boundary is homeomorphic to a sphere with some number (possibly 0) of "handles" and 0, 1, or 2 cross-caps.

In topology, a branch of mathematics, the Klein bottle is an example of a non-orientable surface; it is a two-dimensional manifold against which a system for determining a normal vector cannot be consistently defined. Informally, it is a one-sided surface which, if traveled upon, could be followed back to the point of origin while flipping the traveler upside down. Other related non-orientable objects include the Möbius strip and the real projective plane. Whereas a Möbius strip is a surface with boundary, a Klein bottle has no boundary. For comparison, a sphere is an orientable surface with no boundary.

In mathematics, a Möbius strip, band, or loop, also spelled Mobius or Moebius, is a surface with only one side and only one boundary curve. The Möbius strip is the simplest non-orientable surface. It can be realized as a ruled surface. Its discovery is attributed independently to the German mathematicians Johann Benedict Listing and August Ferdinand Möbius in 1858, though similar structures can be seen in Roman mosaics c. 200–250 AD. Möbius published his results in his articles "Theorie der elementaren Verwandtschaft" (1863) and "Ueber die Bestimmung des Inhaltes eines Polyëders" (1865).

In geometry, Boy's surface is an immersion of the real projective plane in 3-dimensional space found by Werner Boy in 1901. He discovered it on assignment from David Hilbert to prove that the projective plane could not be immersed in 3-space.

In mathematics, orientability is a property of surfaces in Euclidean space that measures whether it is possible to make a consistent choice of surface normal vector at every point. A choice of a normal vector allows one to use the right-hand rule to define a "clockwise" direction of loops in the surface, as needed by Stokes' theorem for instance. More generally, orientability of an abstract surface, or manifold, measures whether one can consistently choose a "clockwise" orientation for all loops in the manifold. Equivalently, a surface is orientable if a two-dimensional figure in the space cannot be moved continuously on that surface and back to its starting point so that it looks like its own mirror image.

In mathematics, particularly in differential topology, there are two Whitney embedding theorems, named after Hassler Whitney:

In mathematics, a solid Klein bottle is a three-dimensional topological space whose boundary is the Klein bottle. 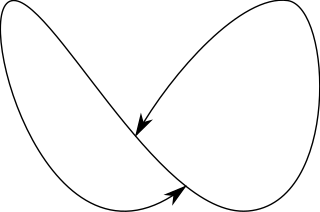 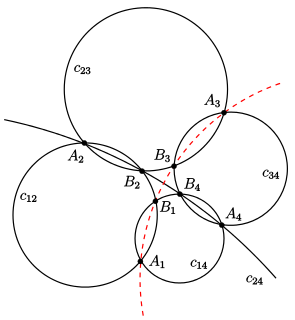 In geometry, the bundle theorem is in the simplest case a statement on six circles and eight points in the real Euclidean plane. In general it is a property of a Möbius plane that is fulfilled by ovoidal Möbius planes only.