Cuthwine was a medieval Bishop of Leicester.

William FitzGilbert was the fifteenth Lord Chancellor of England, from 1141 to 1142, serving the Empress Matilda.

Richard le Gras was Lord Keeper of England and Abbot of Evesham in the 13th century.

Sir Robert Parning was an English lawyer and administrator.

Ætla, who lived in the 7th century, is believed to be one of many Bishops of Dorchester during the Anglo-Saxon period. The village of Attlebridge, Norfolk is named after him, as he is credited for the construction of a bridge there.

Ælfwold was a medieval Bishop of Crediton.

Cuthwine was a medieval bishop of Dunwich in England.

Ealdbeorht may have been a medieval Bishop of Dunwich.

Aethelweald was a medieval Bishop of Elmham.

William de Beaufeu was a medieval Bishop of Thetford and a major landholder mentioned in the Domesday Book.

Eadmund was a 9th-century Englishman. It had been thought he had been Bishop of Winchester between 833 and 838. However, following further studies he is no longer listed to have been bishop.

Frithestan was the Anglo-Saxon Bishop of Winchester from 909 until his resignation in 931.

John Scarle was keeper of the rolls of Chancery from 1394 to 1397 and Archdeacon of Lincoln before being named Lord Chancellor of England in 1399. He held that office until 9 March 1401. He was also Clerk of the Parliament between November 1384 and February 1397.

Wulfsige was a medieval Bishop of Cornwall.

Æthelred was a medieval Bishop of Cornwall. 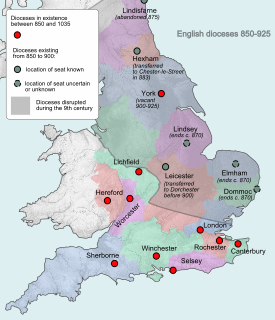 The Bishop of Dunwich is an episcopal title which was first used by an Anglo-Saxon bishop between the seventh and ninth centuries and is currently used by the suffragan bishop of the Diocese of St Edmundsbury and Ipswich. The title takes its name after Dommoc in the English county of Suffolk, which has now largely been lost to the sea.