The hospital has 3,300 employees and is part of the Nuvance Health system. John M. Murphy, M.D. is CEO of Nuvance Health, and previously served as president and CEO of Western Connecticut Health Network, which merged with Health Quest in early 2019 to form Nuvance Health. [2]

Danbury Hospital is a member of the Council of Teaching Hospital and Health Systems (COTH) of the Association of American Medical Colleges (AAMC). Of the 1,100 hospitals involved in graduate medical education in this country, the 400 COTH member institutions train about three-quarters of the residents in the United States. [8]

Founded in 1885, Danbury Hospital was a small community hospital for its first 50 years. Its School of Nursing was established in 1893, and the first graduate medical education (GME) program was a one-year general internship approved in 1926. [8]

In 1970 the hospital developed a long-range strategic plan which included a proposal to make the hospital a regional teaching hospital. A full-time faculty was formed and eventually evolved into the multi-specialty, not-for-profit practice called Danbury Office of Physician Services, PC. [8] 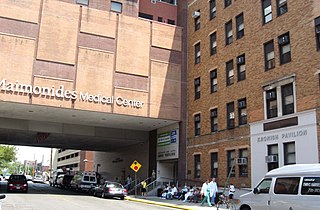 Maimonides Medical Center is a non-profit, non-sectarian hospital located in Borough Park, in the New York City borough of Brooklyn, in the U.S. state of New York. Maimonides is both a treatment facility and academic medical center with 711 beds, and more than 70 primary care and sub-specialty programs. As of August 1, 2016, Maimonides Medical Center was an adult and pediatric trauma center, and Brooklyn's only pediatric trauma center.

Norwalk Hospital is a not-for-profit, acute care community teaching hospital in the Hospital Hill section of Norwalk, Connecticut. The hospital serves a population of 250,000 in lower Fairfield County, Connecticut. The hospital has more than 500 physicians on its active medical staff, and 2,000 health professionals and support personnel. The hospital was part of the Western Connecticut Health Network, which included two other hospitals - Danbury Hospital and New Milford Hospital - up until April 2019, when WCHN merged with Health Quest to form Nuvance Health. 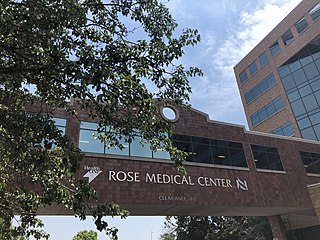 Rose Medical Center is a part of HCA Healthcare's HealthONE network. Located in Denver, Colorado, Rose has been well known as a Denver institution and a 9th Avenue landmark since its founding. With thousands of babies born each year, Rose has earned its reputation as Denver's "Baby Hospital" while becoming a leader in comprehensive women's care, orthopedics and total joint replacement, heart and vascular care, weight-loss treatment, cancer care, surgical services, internal medicine and emergency care. Ryan Tobin is the President and Chief Executive Officer. 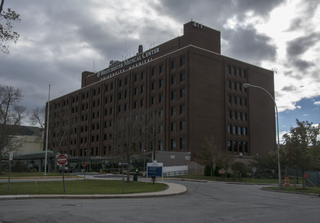 Westchester Medical Center University Hospital (WMC), formerly Grasslands Hospital, is an 895-bed Regional Trauma Center providing health services to residents of the Hudson Valley, northern New Jersey, and southern Connecticut. It is known for having one of the highest case mix index rates of all hospitals in the United States. 652 beds are at the hospital's primary location in Valhalla, while the other 243 beds are at the MidHudson Regional Hospital campus in Poughkeepsie. It is organized as Westchester County Health Care Corporation, and is a New York State public-benefit corporation. 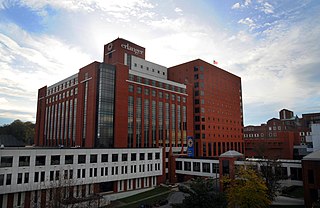 The Erlanger Health System, incorporated as the Chattanooga-Hamilton County Hospital Authority, a non-profit, public benefit corporation registered in the State of Tennessee, is an academic system of hospitals, physicians, and medical services based in Chattanooga, Tennessee. Erlanger is a tertiary referral hospital and Level I Trauma Center serving a 50,000 sq mi (130,000 km2) region of East Tennessee, North Georgia, North Alabama, and western North Carolina. The system's critical care services are accessible to patients within a 100 mi (160 km) radius through five Life Force air ambulance helicopters, each equipped to perform in-flight surgical procedures and transfusions.

Regions Hospital is a teaching hospital located in Saint Paul, Minnesota, United States. It is now part of HealthPartners. The hospital is an ACS verified Level I Trauma Center for both children and adults, and was Minnesota's first pediatric level one trauma center. Regions Hospital is a leading full-service private nonprofit hospital, with special programs in heart, cancer, behavioral health, burn, orthopedics, emergency and trauma care.

Flagler Hospital, based in St. Augustine, Florida, is a not-for-profit facility established in 1889. The organization offers "Centers of Excellence" in bariatrics, heart, cancer, maternity, orthopedics and sinus. 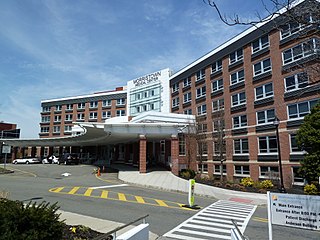 Doctors Hospital of Laredo is a for-profit hospital that is owned and operated by Universal Health Services. There are 164 physicians on the medical staff with the hospital, 80 of whom are active staff. Has a Level III Trauma Center and a Level III NICU, as well as a wide array of medical services. Doctors Hospital of Laredo is located at 10700 McPherson Rd. in Laredo, Texas, United States.

Vassar Brothers Medical Center, now part of Nuvance Health is a medical facility located in the city of Poughkeepsie, New York. It is one of two major medical centers located in Dutchess County, New York, the other being MidHudson Regional Hospital, a member of the Westchester Medical Center Health Network, or WMCHealth. Vassar Hospital has been a part of the Nuvance Health system since its previous parent, Health Quest, merged with the Western Connecticut Health Network in 2019.