Cooper has managed teams at Symantec and Apple Inc. For six years, she served as chief open source "evangelist" for Sun Microsystems before leaving to serve as senior director for open source strategies at Intel. [3] [4] [5] In 2009 she worked as "Open Source Diva" at REvolution Computing (now Revolution Analytics). [6] She is a board member of the Drupal Association [7] and the Open Source Hardware Association. [8] She is a board observer at Mozilla, and serves as a member of the Apache Software Foundation. [3] She was a board member at Open Source Initiative. [9] In October 2018, Danese joined Irish tech company NearForm as VP of Special Initiatives. [10]

Cooper's major work within the open source area of computer software has garnered her the nickname "Open Source Diva". [4] [11] She was recruited, while at a sushi bar in Cupertino, to a position at Sun working towards opening the source code to Java. Within six months she quit frustrated by the claims of open source development with Java that Sun made, only to find that little "open sourcing" was taking place. Sun sought to keep Cooper understanding her need to further open source software and re-hired her as their corporate open source officer. [12] Her six years with Sun Microsystems is credited as the key to the company opening up its source code and lending support to Sun's OpenOffice.org software suite, Oracle Grid Engine, among others. [5] [13] In 2009 she joined REvolution Computing, a "provider of open source predictive analytics solutions", to work on community outreach amongst developers unfamiliar with the programming language R and general open source strategies. [6] She has also made public speaking appearances discussing open sourcing, speaking at the Malaysian National Computer Confederation Open Source Compatibility Centre, OSCON, gov2.0 Expo, and the Southern California Linux Expo. [14] [15] [16] [17] In 2005 Cooper was a contributing author to Open Sources 2.0: The Continuing Evolution. [18]

In February 2010 Cooper was appointed Chief Technical Officer of the Wikimedia Foundation, leading their technical team and developing and executing the Foundation's technical strategy, [3] [13] [19] along with which she would also be working on outreach with Wikimedia volunteers to expand on development and localizing of software. [13] Cooper credits the open source community in helping her obtain the position at Wikimedia. [20] She left the organization in July 2011. [21]

Danese Cooper obtained her high school diploma from Chadwick School and her B.A. from the University of California, Los Angeles. Upon graduation she spent time in Morocco as a volunteer in the Peace Corps. [6] [12] Cooper credits her time with the Peace Corps as fostering her desire to travel and work within the developing world to explore policy, education and how open source software can "give certain kids another alternative". She is married to a software developer and enjoys knitting, which she often engages in during meetings. [12] [23] [24]

Solaris is a non-free Unix operating system originally developed by Sun Microsystems. It superseded the company's earlier SunOS in 1993. In 2010, after the Sun acquisition by Oracle, it was renamed Oracle Solaris.

OpenOffice.org (OOo), commonly known as OpenOffice, is a discontinued open-source office suite. It was an open-sourced version of the earlier StarOffice, which Sun Microsystems acquired in 1999 for internal use. 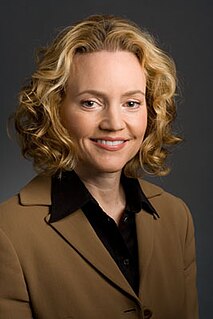 Keith Packard is a software developer, best known for his work on the X Window System.

The O'Reilly Open Source Convention (OSCON) is an annual convention for the discussion of free and open source software. It is organized by the publisher O'Reilly Media and is held each summer in the United States.

The Common Development and Distribution License (CDDL) is a free and open-source software license, produced by Sun Microsystems, based on the Mozilla Public License (MPL). Files licensed under the CDDL can be combined with files licensed under other licenses, whether open source or proprietary. In 2005 the Open Source Initiative approved the license. The Free Software Foundation (FSF) considers it a free software license, but one which is incompatible with the GNU General Public License (GPL). 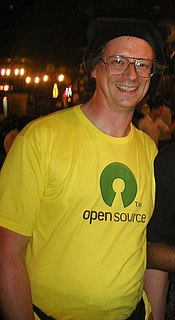 Russell "Russ" Nelson is an American computer programmer. He was a founding board member of the Open Source Initiative and briefly served as its president in 2005. 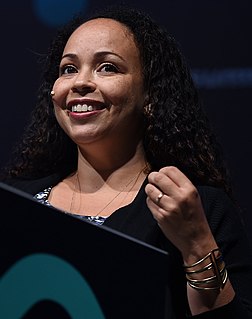 Mwende Window Snyder, better known as Window Snyder is an American computer security expert. She has previously been a top security officer at Intel, Fastly, Apple, and Mozilla Corporation. She was also a Senior Security Strategist at Microsoft. She is co-author of Threat Modeling, a standard manual on application security.

Allison Randal is a software developer and author. She was the chief architect of the Parrot virtual machine, a member of the board of directors for The Perl Foundation, a director of the Python Software Foundation from 2010 to 2012, and the chairman of the Parrot Foundation. She is also the lead developer of Punie, the port of Perl 1 to Parrot. She is co-author of Perl 6 and Parrot Essentials and the Synopses of Perl 6. She was employed by O'Reilly Media. From August 2010 till February 2012, Randal was the Technical Architect of Ubuntu at Canonical.

Brian Aker, born August 4, 1972 in Lexington, Kentucky, US is an open-source hacker who has worked on various Apache modules, the Slash system, and numerous storage engines for the MySQL database. Aker was Director of Architecture at MySQL AB until it was acquired by Sun Microsystems. He led Sun's web scaling research group, where he worked on the Drizzle database project. He later became a Distinguished Engineer for Sun Microsystems. He left Sun Microsystems after Oracle acquired it. After leaving Sun Microsystems he became the CTO of Data Differential and provided support to open source projects such as libmemcached, Gearman and the Drizzle database project. Aker is currently a Fellow and VP at Hewlett Packard Enterprise.

Jim Jagielski is an American software engineer, who specializes in web, cloud and open source technologies.

Simon Phipps is a computer scientist and web and open source advocate.

Stefano Zacchiroli is an Italian/French academic and computer scientist who lives and works in Paris, and a former Debian Project Leader, a position in which he served from April 2010 to April 2013. Succeeding Steve McIntyre, he was himself succeeded by Lucas Nussbaum in an election where he himself was no longer a candidate. Zacchiroli became a Debian Developer in 2001. After attending LinuxTag in 2004, he became more involved in the Debian community and the project itself.

Rich Green is an American software engineer and business executive.

Lila Tretikov is a Russian–American engineer and manager, who was executive director of the Wikimedia Foundation from 2014 to 2016.