Dashami is the Sanskrit word for "ten", and is the tenth day in the lunar fortnight ( Paksha ) of the Hindu calendar. Each month has two Dashami days, being the tenth day of the "bright" (Shukla) and of the "dark" (Krishna) fortnights respectively. [1] Thus Dashami occurs on the tenth and the twenty-fifth day of each month.

Dashami is a very important day in the Hindu festival of Dashain, or Navrati, when it is known as Vijayadashami. [2] Some people fast while others eat with their visiting relatives.

The Hindu calendar, Panchanga or Panjika is one of various lunisolar calendars that are traditionally used in the Indian subcontinent and South-east Asia, with further regional variations for social and Hindu religious purposes. They adopt a similar underlying concept for timekeeping based on sidereal year for solar cycle and adjustment of lunar cycles in every three years, however also differ in their relative emphasis to moon cycle or the sun cycle and the names of months and when they consider the New Year to start. Of the various regional calendars, the most studied and known Hindu calendars are the Shalivahana Shaka found in the Deccan region of Southern India, Vikram Samvat (Bikrami) found in Nepal, North and Central regions of India – all of which emphasize the lunar cycle. Their new year starts in spring. In contrast, in regions such as Tamil Nadu and Kerala, the solar cycle is emphasized and this is called the Tamil Calendar and Malayalam calendar, their new year starts in autumn, and these have origins in the second half of the 1st millennium CE. A Hindu calendar is sometimes referred to as Panchangam (पञ्चाङ्ग), which is known also known as Panjika in Eastern India. 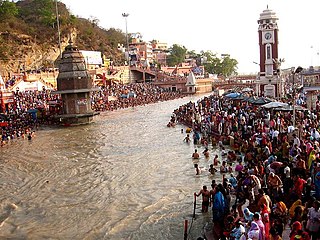 Gunlā is the tenth month in the Nepal Sambat lunar calendar, the national lunar calendar of Nepal. It corresponds to August of the Gregorian Calendar.

This article lists the traditional festivals and other cultural events in the Odisha region of India. Odisha celebrates 13 festivals in 12 months as the saying goes Bāra Māsare Tera Parba. 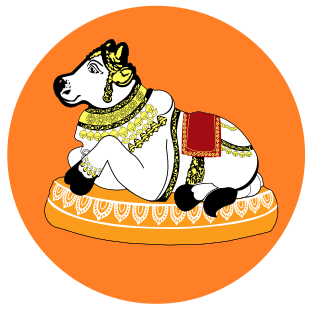 Pradosha or Pradosham is a bimonthly occasion on the thirteenth day of every fortnight in the Hindu calendar. It is closely connected with the worship of the Hindu god Shiva. The auspicious 3 hour period, 1.5 hours before and after the sunset is considered as the most suited and optimum time for worship of Shiva on this day. The fasting vow performed during the period is called "Pradosha vrata". A devotee should wear rudraksha, Vibhuti and worship Shiva by abhishek, sandal paste, Bael leaves, fragrance, deepa and naivedya.

Shayani Ekadashi, also known as Maha-ekadashi, is the eleventh lunar day (Ekadashi) of the bright fortnight of the Hindu month of Ashadha. This holy day is of special significance to Vaishnavas, followers of the Hindu protector God, Lord Vishnu.

Vaikunta Ekadashi is a special Ekādaśī. It coincides with Mokṣadā Ekādaśī or Putrada Ekādaśī. It is observed on the 11th lunar day of the waxing lunar fortnight of the solar month of Dhanu. This falls between 16 December and 13 January in the English calendar.

Lakshmi Pooja, is a Hindu religious festival that falls on Amavasya in the Vikram Samvat Hindu calendar month of Kartik, on the third day of Deepawali and is considered as the main festive day of Deepawali, however in Assam this puja is celebrated 5 days after Vijaya Dashami.

Maha Navami (Mahanavami) or Durga Navami is celebrated as the victory of good over evil. It is the last day of battle between goddess Durga and demon Mahishasura. Maha Navami begins with Mahasnan, followed by prayers to goddess Durga or Maa Durga. It is believed that on Maha Navami goddess Durga is worshipped as Mahisasuramardhini - which literally means the slayer of the buffalo demon or mahishasura. On Maha Navami, Durga Maa made her final assault on demon Mahishasura, and the following morning, on Vijayadashami, triumphed over him. In fact, Vijayadashami gets derives its name from the Sanskrit and Hindi words Vijaya meaning victorious or triumphant, and Dashami, meaning tenth day. Vijayadashami is also celebrated as Dussehra, which too derives its name from the Sanskrit words Dush meaning bad or evil, and Hara which means defeating or destroying - thereby signifying the victory of good over evil.

Ashwin, also known as Ashoj, is the sixth month in the Bikram Sambat, the official Nepali calendar. This month coincides with September 17 to October 17 of the Western Calendar and is 31 days long.

Varuthini Ekadashi, also known Baruthani Ekadashi, is a Hindu holy day, which falls on the 11th lunar day (ekadashi) of the fortnight of the waning moon in the Hindu month of Chaitra or Vaishakha. By both schemes, Varuthini Ekadashi falls on the same day in April or May. Like all ekadashis, the God Vishnu, especially his fifth avatar Vamana, is worshipped.

Mohani or Mohni is one of the most important festivals among the Newars which involves a packed itinerary of religious services, pilgrimages, family gatherings and outdoor celebrations lasting several days. Special dinners known as Nakhtya, to which all the relatives are invited, continue for weeks later. Mohani is the equivalent of Nepal's biggest festival Dasain, and there are similarities and differences between the two.