Last updated May 13, 2022
Third day of the lunar fortnight

Tritiya (Sanskrit: 'third') is the third day in the lunar fortnight ( Paksha ) of the Hindu calendar. Each month has two Tritiya days, being the third day of the "bright" (Shukla) and of the "dark" (Krishna) fortnights respectively. [1] It is called as Tadige in Kannada.

Hindu views of homosexuality, and LGBT issues more generally, are diverse and different Hindu groups have distinct views. A number of Hindu texts have portrayed homosexual experience as natural and joyful, the Kamasutra affirms and recognizes same-sex relations, and there are several Hindu temples which have carvings that depict both men and women engaging in homosexual acts. There are also numerous Hindu deities that are shown to be gender-fluid and falling into the LGBT spectrum. Same-sex relations and gender variance have been represented within Hinduism from Vedic times through to the present day, in rituals, law books, religious or narrative mythologies, commentaries, paintings, and even sculptures. In 2009, the Delhi High Court legalised homosexuality in India, but the Supreme Court of India subsequently overturned the high court's decision. The Supreme Court of India, in a later ruling in 2018, reversed its previous verdict and decriminalised homosexual intercourse and relationships. 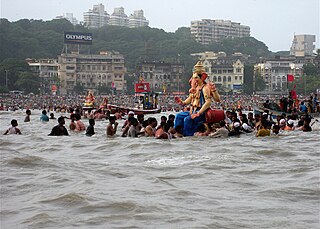 Vikram Samvat or Bikram Sambat and also known as the Vikrami calendar, is a historical Hindu calendar used in the Indian subcontinent. It is the official calendar of Nepal. In India, it is used in several states. The traditional Vikram Samvat calendar, as used in India, uses lunar months and solar sidereal years. The Nepali Bikram Sambat introduced in 1901 AD, also uses a solar sidereal year. 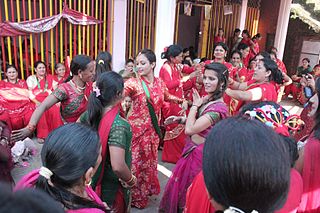 Teej is the generic name for a number of Hindu festivals that are celebrated by women. Haryali Teej and Hartalika Teej welcome the monsoon season and are celebrated primarily by girls and women, with songs, dancing and prayer rituals. The monsoon festivals of Teej are primarily dedicated to Parvati and her union with Shiva. Women often fast in celebration of Teej. Hartalika Teej is celebrated in all parts of Nepal and most of the parts of North India. Teej festivals are traditionally observed by women to celebrate the monsoons during the months of Shravan and Bhadrapada of Hindu calendar. Women often pray to Parvati and Shiva during Teej. 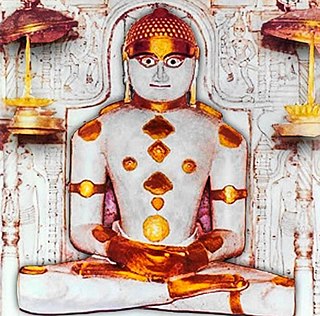 Rishabhanatha, also Ṛṣabhadeva, Rishabhadeva, Ṛṣabha or Ikshvaku is the first Tīrthaṅkara of Jainism and establisher of Ikshvaku dynasty. He was the first of twenty-four teachers in the present half-cycle of time in Jain cosmology, and called a "ford maker" because his teachings helped one across the sea of interminable rebirths and deaths. The legends depict him as having lived millions of years ago. He was the spiritual successor of Sampratti Bhagwan, the last Tirthankar of previous time cycle. He is also known as Ādinātha which translates into "First (Adi) Lord (nātha)", as well as Adishvara, Yugadideva, Prathamarajeshwara, and Nabheya. Along with Mahavira, Parshvanath, Neminath, and Shantinath; Rishabhanath is one of the five Tirthankaras that attract the most devotional worship among the Jains.

Akshaya Tritiya, also known as Akti or Akha Teej,is an annual Hindu and Jain spring festival. It falls on the third tithi of the bright half of the month of Vaisakha. It is regionally observed as an auspicious day by Hindus and Jains in India ,it signifies the "third day of unending prosperity".

This article lists the traditional festivals and other cultural events in the Odisha region of India. Odisha celebrates 13 festivals in 12 months as the saying goes Bāra Māsare Tera Parba. 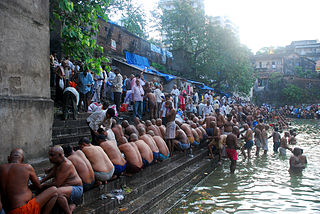 Navami is the Sanskrit word for "nine", and is the ninth day in the lunar fortnight (Paksha) of the Hindu calendar. Each month has two Navami days, being the ninth day of the "bright" (Shukla) and of the "dark" (Krishna) fortnights respectively. Thus Navami occurs on the ninth and the twenty-fourth day of each month. 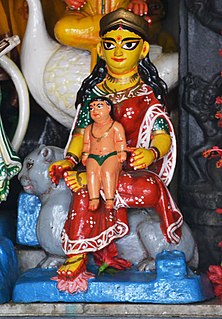 Shashthi or Shashti is a Hindu goddess, venerated in Nepal and India as the benefactor and protector of children. She is also the deity of vegetation and reproduction and is believed to bestow children and assist during childbirth. She is often pictured as a motherly figure, riding a cat and nursing one or more infants. She is symbolically represented in a variety of forms, including an earthenware pitcher, a banyan tree or part of it or a red stone beneath such a tree; outdoor spaces termed shashthitala are also consecrated for her worship. The worship of Shashthi is prescribed to occur on the sixth day of each lunar month of the Hindu calendar as well as on the sixth day after a child's birth. Barren women desiring to conceive and mothers seeking to ensure the protection of their children will worship Shashthi and request her blessings and aid. She is especially venerated in eastern India.

Dashami is the Sanskrit word for "ten", and is the tenth day in the lunar fortnight (Paksha) of the Hindu calendar. Each month has two Dashami days, being the tenth day of the "bright" (Shukla) and of the "dark" (Krishna) fortnights respectively. Thus Dashami occurs on the tenth and the twenty-fifth day of each month.

Jain festivals occur on designated days of the year. Jain festivals are either related to life events of Tirthankara or they are performed with intention of purification of soul.