The Dean of Coventry is based at Coventry Cathedral in the West Midlands, UK and is the head of the Chapter at the cathedral, which was created in 1918 from the parish church of St Michael. The current dean is John Witcombe.

Prior to appointment of the first dean the function was carried out by a sub-dean or a provost.[ clarification needed ] 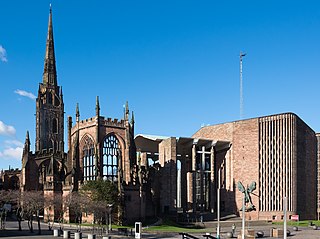 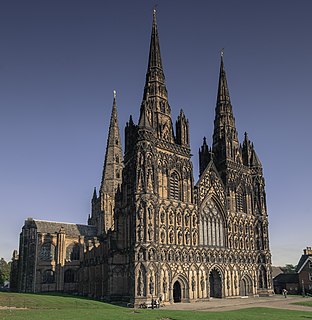 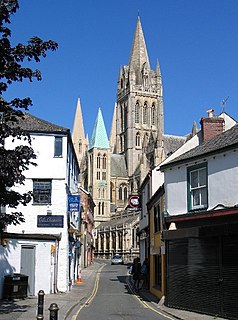 The Cathedral Church of the Holy Spirit, Guildford, commonly known as Guildford Cathedral, is the Anglican cathedral at Guildford, Surrey, England. Richard Onslow donated the first 6 acres of land on which the cathedral stands, with Viscount Bennett, a former Prime Minister of Canada, purchasing the remaining land and donating it to the cathedral in 1947. Designed by Edward Maufe and built between 1936 and 1961, it is the seat of the Bishop of Guildford.

A provost is a senior official in a number of Christian Churches.

Mark Watts Bryant is a retired British Anglican bishop. From 2007 to 2018 he was the Bishop of Jarrow, the suffragan bishop of the Diocese of Durham in the Church of England.

Rupert William Noel Hoare is a former dean of Liverpool and Anglican area bishop of Dudley.

The International Centre for Reconciliation was based at Coventry Cathedral, UK, and was established in 1940 after the destruction of the cathedral in the Second World War. Rather than seek revenge for the devastation caused, the centre's founders vowed to promote reconciliation in areas of conflict. This began in the former Communist bloc, but has since broadened to focus on the conflict between the three major monotheistic faiths. In 2008, the ICR ceased to exist as an individual entity, and its work was taken on more closely by Coventry Cathedral under the Coventry Cathedral Reconciliation Ministry banner.

John Dudley Irvine was the Dean of Coventry.

Michael Sadgrove is a Church of England priest and noted theological author. Between 2003 and 2015, he was Dean of Durham. From 1995 to 2003, he was Provost, then Dean of Sheffield Cathedral. He is now Dean Emeritus of Durham.

John Julian Witcombe is the Dean of Coventry in the Church of England.