Donald Ray McMonagle (born May 14, 1952) (Col, USAF, Ret.) is a former astronaut and a veteran of three shuttle flights. He became the Manager, Launch Integration, at the Kennedy Space Center, Florida, on August 15, 1997. In this capacity he was responsible for final shuttle preparation, launch execution, and return of the orbiter to KSC following landings at any other location. He was chair of the Mission Management Team, and was the final authority for launch decision.

In the United States Army, Marine Corps, and Air Force, colonel is the most senior field grade military officer rank, immediately above the rank of lieutenant colonel and immediately below the rank of brigadier general. It is equivalent to the naval rank of captain in the other uniformed services. The pay grade for colonel is O-6.

The John F Kennedy Space Center is one of ten National Aeronautics and Space Administration field centers. Since December 1968, Kennedy Space Center has been NASA's primary launch center of human spaceflight. Launch operations for the Apollo, Skylab and Space Shuttle programs were carried out from Kennedy Space Center Launch Complex 39 and managed by KSC. Located on the east coast of Florida, KSC is adjacent to Cape Canaveral Air Force Station (CCAFS). The management of the two entities work very closely together, share resources, and even own facilities on each other's property.

McMonagle was born on May 14, 1952, in Flint, Michigan, and graduated from Hamady High School in 1970. he received a Bachelor of Science degree in Astronautical Engineering from the United States Air Force Academy in 1974, a Master of Science degree in Mechanical Engineering from California State University, Fresno in 1985, and a Master of Business Administration degree from the University of Michigan Ross School of Business in 2003.

Flint is the largest city and seat of Genesee County, Michigan, United States. Located along the Flint River, 66 miles (106 km) northwest of Detroit, it is a principal city within the region known as Mid Michigan. According to the 2010 census, Flint has a population of 102,434, making it the seventh largest city in Michigan. The Flint metropolitan area is located entirely within Genesee County. It is the fourth largest metropolitan area in Michigan with a population of 425,790 in 2010. The city was incorporated in 1855.

McMonagle completed pilot training at Columbus Air Force Base (AFB), Mississippi, in 1975. After F-4 training at Homestead AFB, Florida, he went on a one-year tour of duty as an F-4 pilot at Kunsan Air Base, South Korea. He returned from overseas to Holloman AFB, New Mexico, in 1977. In 1979, McMonagle was assigned to Luke AFB, Arizona, as an F-15 instructor pilot. In 1981, he entered the USAF Test Pilot School at Edwards AFB, California, and was the outstanding graduate in his class. [1] From 1982 to 1985, McMonagle was the operations officer and a project test pilot for the Advanced Fighter Technology Integration F-16 aircraft. After attending the Air Command and Staff College at Maxwell AFB, Alabama, from 1985 to 1986, he was assigned as the operations officer of the 6513th Test Squadron at Edwards AFB.

Columbus Air Force Base is a United States Air Force base located in Columbus, Mississippi. The host unit at Columbus AFB is the 14th Flying Training Wing , which is a part of Air Education and Training Command (AETC). 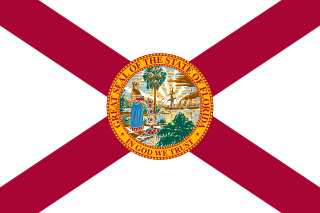 The Northrop T-38 Talon is a two-seat, twinjet supersonic jet trainer. It was the world's first supersonic trainer and is also the most produced. The T-38 remains in service as of 2019 in several air forces.

McMonagle was selected as an astronaut by NASA in June 1987. A veteran of three space flights, he has logged over 605 hours in space.[ citation needed ] 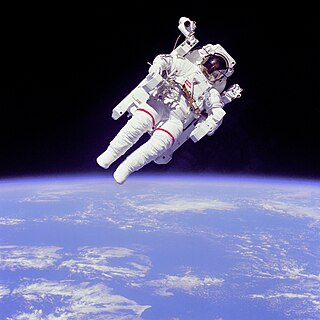 An astronaut or cosmonaut is a person trained by a human spaceflight program to command, pilot, or serve as a crew member of a spacecraft. Although generally reserved for professional space travelers, the terms are sometimes applied to anyone who travels into space, including scientists, politicians, journalists, and tourists. 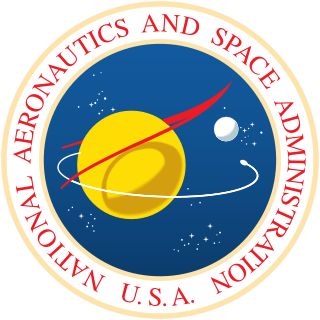 McMonagle flew as a mission specialist aboard the Space Shuttle Discovery on Department of Defense mission STS-39 in April 1991. During this highly successful eight-day mission, the seven-man crew deployed, operated, and retrieved a remotely controlled spacecraft and conducted several science experiments to include research of both natural and induced phenomena in the Earth's atmosphere. 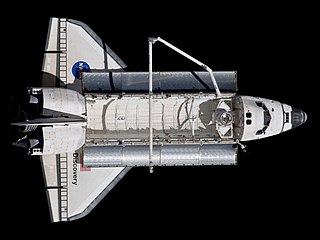 Space Shuttle Discovery is one of the orbiters from NASA's Space Shuttle program and the third of five fully operational orbiters to be built. Its first mission, STS-41-D, flew from August 30 to September 5, 1984. Over 27 years of service it launched and landed 39 times, gathering more spaceflights than any other spacecraft to date. The shuttle has three main components: the orbiter, a central fuel tank, and two rocket boosters. Nearly 25,000 heat resistant tiles cover the orbiter to protect it from high temperatures on re-entry.

The United States Department of Defense is an executive branch department of the federal government charged with coordinating and supervising all agencies and functions of the government concerned directly with national security and the United States Armed Forces. The department is the largest employer in the world, with nearly 1.3 million active-duty service members as of 2016. Additional employees include over 826,000 National Guard and Reservists from the armed forces and over 732,000 civilians bringing the total to over 2.8 million employees. Headquartered at the Pentagon in Arlington, Virginia, just outside Washington, D.C., the DoD's stated mission is to provide "the military forces needed to deter war and ensure our nation's security".

In January 1993, McMonagle served as pilot on STS-54 aboard the Space Shuttle Endeavour. The six-day mission featured the deployment of a tracking and data relay satellite (TDRS), and the collection of information about celestial x-rays using a diffuse X-ray spectrometer.

McMonagle commanded a crew of six aboard Space Shuttle Atlantis on the STS-66 Atmospheric Laboratory for Applications and Science-3 (ATLAS-3) 11-day mission in November 1994.

In January 1996 McMonagle was assigned the task to establish a new Extra-Vehicular Activity (EVA) Project Office responsible for managing all NASA resources associated with space suits and tools used to conduct space walks in support of space shuttles and the International Space Station. This role included responsibility for developing and implementing a plan for research and development of next-generation space suits to support future human space exploration.

McMonagle is a member of the Society of Experimental Test Pilots; Association of Graduates, U.S. Air Force Academy; and Association of Space Explorers.

McMonagle's accomplishments have earned him many notable awards, including:

McMonagle is married to the former Janyce Morton of Phoenix, Arizona. They have two children and reside in Tucson, Arizona. [2]

As of 19 June 2006, he was named as the Vice-President of Quality and Mission Effectiveness of the Missile Systems business unit of Raytheon in Tucson. 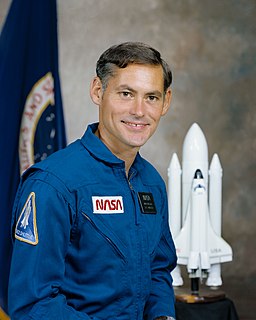 Karol Joseph "Bo" Bobko, , is an American aerospace engineer, retired U.S. Air Force officer, test pilot, and a former USAF and NASA astronaut. Bobko was the first graduate of the US Air Force Academy to travel in space. 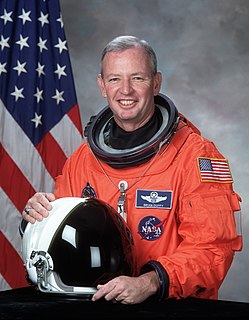 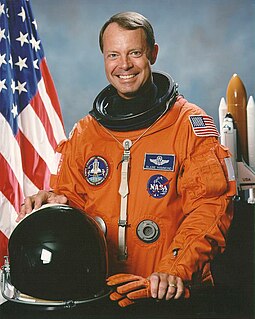 Terence Thomas "Tom" Henricks is a retired colonel in the United States Air Force and a former NASA astronaut. He served on four Space Shuttle missions.

Kevin Richard Kregel is an American former astronaut, and former member of the Space Launch Initiative Project at the Lyndon B. Johnson Space Center. 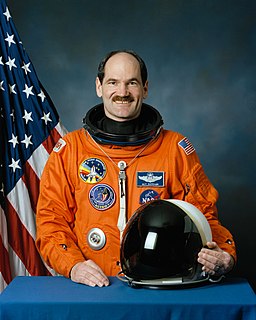 Guy Spence Gardner is a United States Air Force officer and a former astronaut. He holds the rank of colonel. He flew as pilot on two Space Shuttle missions, STS-27 and STS-35. Gardner was also the 12th president of the Williamson Free School of Mechanical Trades.

Carl Erwin Walz is a former NASA astronaut currently working for Orbital Sciences Corporation's Advanced Programs Group as Vice President for Human Space Flight Operations. Walz was formerly assigned to the Exploration Systems Mission Directorate at NASA Headquarters in Washington, DC. He was the Acting Director for the Advanced Capabilities Division in the Exploration Systems Mission Directorate, and was responsible for a broad range of activities to include Human Research, Technology Development, Nuclear Power and Propulsion and the Lunar Robotic Exploration Programs to support the Vision for Space Exploration. 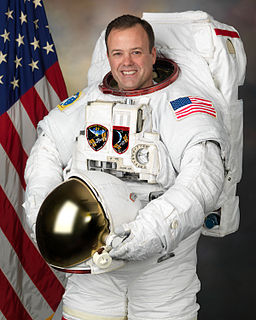 Ronald John Garan Jr. is a NASA astronaut. After graduating from State University of New York College at Oneonta in 1982, he joined the Air Force, becoming a Second Lieutenant in 1984. He became an F-16 pilot, and flew combat missions in Desert Shield and Desert Storm. Before becoming an astronaut he was the Operations Officer of the 40th Flight Test Squadron (FTS). He first flew in space as a Mission Specialist on the STS-124 mission to the International Space Station (ISS). He returned to ISS on April 4, 2011, for a six-month stay as a member of Expedition 27. 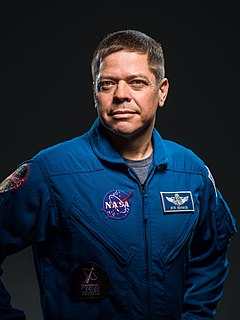 Robert Louis "Bob" Behnken is a United States Air Force officer, NASA astronaut and former Chief of the Astronaut Office. Behnken holds a Ph.D in Mechanical Engineering and holds the rank of Colonel in the U.S. Air Force. Col. Behnken has logged over 1,000 flight hours in 25 different aircraft. He flew aboard Space Shuttle missions STS-123 (2008) and STS-130 (2010) as a Mission Specialist, accumulating over 708 hours in space, including 37 hours of spacewalk time. Behnken was also assigned as Mission Specialist 1 to the STS-400 rescue mission. He is married to fellow astronaut K. Megan McArthur.