The Donation Land Claim Act of 1850, sometimes known as the Donation Land Act, [1] was a statute enacted by the United States Congress in late 1850, intended to promote homestead settlements in the Oregon Territory. It followed the Distribution-Preemption Act 1841. The law, a forerunner of the later Homestead Act, brought thousands of settlers into the new territory, swelling their ranks along the Oregon Trail. 7,437 land patents were issued under the law, which expired in late 1855. The Donation Land Claim Act allowed white men or partial Native Americans (mixed with white) who had arrived in Oregon before 1850 to work on a piece of land for four years and legally claim the land for themselves. [2]

Along with other US land grant legislation, the Donation Land Claim Act discriminated against nonwhite settlers [3] and had the effect of dispossessing land from Native Americans. [4]

The passage of the law was largely due to the efforts of Samuel R. Thurston, the Oregon territorial delegate to Congress. [5] The act, which became law on 27 September 1850, granted 320 acres (1.3 km2) of designated areas free of charge to every unmarried white male citizen eighteen or older and 640 acres (2.6 km2) to every married couple arriving in the Oregon Territory before 1 December 1850. [6] In the case of a married couple, the husband and wife each owned half of the total grant under their own names. The law was one of the first that allowed married women in the United States to hold property under their own name. [5] American "half-breed Indians" were also eligible for the grant. [7] A provision in the law granted half the amount to those who arrived after the 1850 deadline but before 1854. [7] Claimants were required to live on the land and to cultivate it for four years to gain ownership title to it. [6]

The provisional government formed at Champoeg had limited the land claims offered in the hope of preventing land speculation. The Organic Act of the Oregon Territory had granted 640 acres (2.6 km²) to each married couple. [5] The new law voided the previous statutes but essentially continued the same policy and was worded in such a way as to legitimize existing claims. One such claim legitimized by the act was that of George Abernethy, who had been elected to the governorship in the days of the provisional government. His claim became famous for Abernethy Green, where new emigrants camped at the end of the Oregon Trail while seeking a piece of land for themselves.

Claims under the law were granted at the federal land office in Oregon City. The most famous patent granted at the Oregon City Land Office was the plat for the city of San Francisco, which had to be sent up the coast from California by ship. The claims of the land were surveyed by the Surveyor General of Oregon, an office created out of the law. As part of the general survey, the Willamette Stone was placed just west of Portland, defining the Willamette Meridian. [6]

After the 1855 cut-off date, the designated land in Oregon was no longer free but was still available, selling at $1.25 an acre ($3.09/hectare), with a limit of 320 acres (1.3 km²) in any one claim. [6] The law expired on December 1, 1855. [6] In the following years, the price was raised and the maximum size of claims was progressively lowered. The government's only goal was to raise the population in that area.

In 1862, Congress passed the first of the "Homestead Acts," which was largely designed to encourage settlement of the Great Plains states, but applied to Oregon as well. [6] 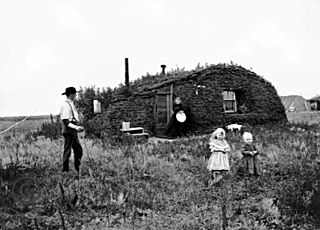 The Homestead Acts were several laws in the United States by which an applicant could acquire ownership of government land or the public domain, typically called a homestead. In all, more than 160 million acres of public land, or nearly 10 percent of the total area of the United States, was given away free to 1.6 million homesteaders; most of the homesteads were west of the Mississippi River. 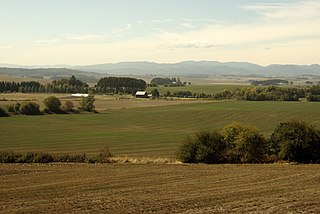 The Treaty with the Kalapuya, etc., also known as the Kalapuya Treaty or the Treaty of Dayton, was an 1855 treaty between the United States and the bands of the Kalapuya tribe, the Molala tribe, the Clackamas, and several others in the Oregon Territory. In it the tribes were forced to cede land in exchange for promised permanent reservation, annuities, supplies, educational, vocational, health services, and protection from ongoing violence from American settlers. The treaty effectively gave over the entirety of the Willamette Valley to the United States and removed indigenous groups who had resided in the area for over 10,000 years. The treaty was signed on January 22, 1855, in Dayton, Oregon, ratified on March 3, 1855, and proclaimed on April 10, 1855. 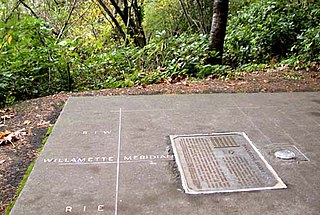 The Willamette Stone was a small stone obelisk originally installed by the Department of Interior in 1885 in the western hills of Portland, Oregon in the United States to mark the intersection and origin of the Willamette meridian and Willamette baseline. It replaced a cedar stake placed by the Surveyor General of the Oregon Territory in 1851; this stake defined the grid system of sections and townships from which all real property in the states of Oregon and Washington has been measured following the Donation Land Claim Act of 1850. The Willamette meridian runs north–south, and the Willamette baseline runs east–west through the marker. The easternmost northeast corner of Washington County is sited on the marker.

Samuel Royal Thurston was an American pioneer, lawyer and politician. He was the first delegate from the Oregon Territory to the United States Congress and was instrumental in the passage of the Donation Land Claim Act. 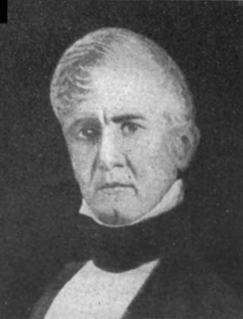 John Pollard Gaines was a U.S. military and political figure. He was a Whig member of the United States House of Representatives, representing Kentucky from 1847 to 1849, and he served as Governor of the Oregon Territory from 1850 to 1853, stepping down after a turbulent term in office. He was the owner of Margaret Garner, whose enslavement and sexual assault is the basis for Toni Morrison's novel, Beloved. 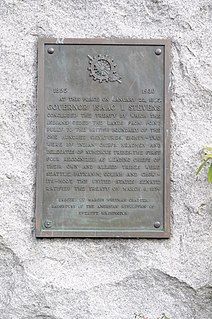 The Treaty of Point Elliott of 1855, or the Point Elliott Treaty,—also known as Treaty of Point Elliot / Point Elliott Treaty—is the lands settlement treaty between the United States government and the Native American tribes of the greater Puget Sound region in the recently formed Washington Territory, one of about thirteen treaties between the U.S. and Native Nations in what is now Washington. The treaty was signed on 22 January 1855, at Muckl-te-oh or Point Elliott, now Mukilteo, Washington, and ratified 8 March and 11 April 1859. Between the signing of the treaty and the ratification, fighting continued throughout the region. Lands were being occupied by European-Americans since settlement in what became Washington Territory began in earnest from about 1845. 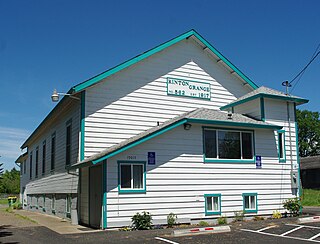 Kinton is an unincorporated community in Washington County, Oregon, United States. It is located near the northern shore of the Tualatin River, near the intersection of Oregon Route 210 and River Road, a major county arterial that runs northwest towards Hillsboro. Kinton is located approximately eight miles north of Newberg, six miles southwest of Beaverton, and seven miles southeast of Hillsboro. The community was once the site of a ferry crossing the Tualatin River between Kinton and nearby Scholls. While the ferry has long since been replaced with a bridge, OR 210 is still known locally as Scholls Ferry Road. Kinton is in Oregon's wine country, with several notable wineries in the area. 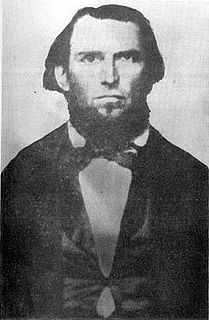 William P. Bryant was an American jurist from Kentucky. He served as the first chief justice of the Oregon Supreme Court in the Oregon Territory. United States President James K. Polk appointed Bryant, of Indiana, to the court once the Oregon Territory was established in 1848. In Indiana he served in both houses of the Indiana General Assembly and was a county judge. Bryant also fought in the Black Hawk War against Native Americans. 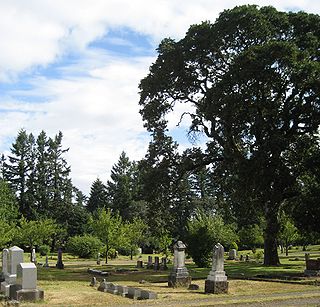 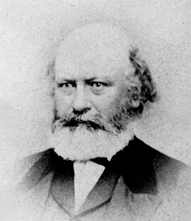 Alonzo Albert Skinner was an American judge and Whig party politician in Oregon. He was the 16th Associate Justice of the Oregon Supreme Court and unsuccessful candidate for the office of governor. He also served as a circuit court judge for the state of Oregon, was a customs collector, a judge in the Provisional Government of Oregon, and a commissioner on a Native American treaty commission. 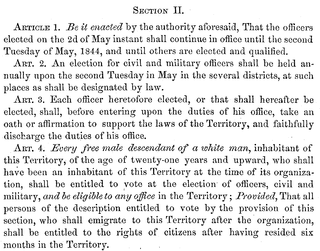 The Organic Laws of Oregon were two sets of legislation passed in the 1840s by a group of primarily American settlers based in the Willamette Valley. These laws were drafted after the Champoeg Meetings and created the structure of a government in the Oregon Country. At the last Champoeg Meeting in May 1843, the majority voted to create what became the Provisional Government of Oregon. Laws were drafted by the committee and accepted by a popular vote in July. These laws were reformed by a second version in 1845.

Albert E. "A.E." Wilson was an American pioneer and merchant in Oregon Country. Raised in the United States, he moved to what would become the U.S. state of Oregon where he operated stores, was involved in politics, and was elected as the first judge of the Provisional Government of Oregon.

Hiram Aldrich Straight was an American farmer and legislator in what became the state of Oregon. A native of New York state, he would live in Iowa before traveling the Oregon Trail to what was then the Oregon Country. In Oregon, he would serve in the Provisional Legislature of Oregon and the Oregon Territorial Legislature. 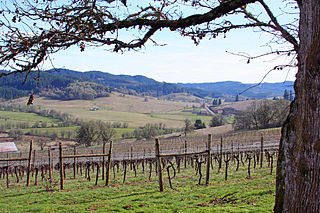 Lorane is an unincorporated community in Lane County, Oregon, United States. It is located on Territorial Road about 20 miles (32 km) southwest of Eugene; it is 13 miles (21 km) northwest of Cottage Grove. The community is near the headwaters of the North Fork Siuslaw River in a valley in the foothills of the Central Oregon Coast Range. Local businesses include several wineries, including the King Estate Winery, Chateau Lorane Winery and Iris Hill Winery, and two general stores.

Socrates Hotchkiss Tryon Sr. was a pioneer physician in what became the U.S. state of Oregon. A native of Vermont, he later lived in Iowa and California before moving to the Oregon Territory where he settled the land that now comprises part of the Tryon Creek State Natural Area in Portland and Lake Oswego. He was also a member of the 1846 Iowa Constitutional Convention.

Siltcoos is an unincorporated community in Lane County, Oregon, United States. It is about 13 miles (21 km) south of Florence on the east shore of Siltcoos Lake. 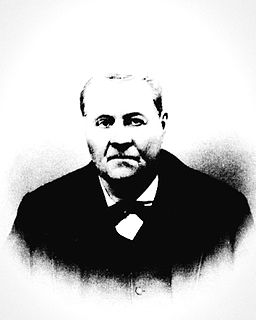 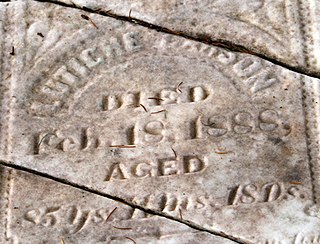 Letitia Carson was an Oregon pioneer and one of the first African Americans to be listed as living in Oregon according to the U.S. Federal Census. In fact, she was the only black woman to successfully make a land claim in Oregon under the Homestead Act of 1862. She was the inspiration for Jane Kirkpatrick's 2014 novel A Light In The Wilderness.