Determining source route requires accumulating the address of each device between the source and destination during route discovery. The accumulated path information is cached by nodes processing the route discovery packets. The learned paths are used to route packets. To accomplish source routing, the routed packets contain the address of each device the packet will traverse. This may result in high overhead for long paths or large addresses, like IPv6. To avoid using source routing, DSR optionally defines a flow id option that allows packets to be forwarded on a hop-by-hop basis.

This protocol is truly based on source routing whereby all the routing information is maintained (continually updated) at mobile nodes. It has only two major phases, which are Route Discovery and Route Maintenance. Route Reply would only be generated if the message has reached the intended destination node (route record which is initially contained in Route Request would be inserted into the Route Reply).

To return the Route Reply, the destination node must have a route to the source node. If the route is in the Destination Node's route cache, the route would be used. Otherwise, the node will reverse the route based on the route record in the Route Request message header (this requires that all links are symmetric). In the event of fatal transmission, the Route Maintenance Phase is initiated whereby the Route Error packets are generated at a node. The erroneous hop will be removed from the node's route cache; all routes containing the hop are truncated at that point. Again, the Route Discovery Phase is initiated to determine the most viable route.

For information on other similar protocols, see the ad hoc routing protocol list.

Dynamic source routing protocol (DSR) is an on-demand protocol designed to restrict the bandwidth consumed by control packets in ad hoc wireless networks by eliminating the periodic table-update messages required in the table-driven approach. The major difference between this and the other on-demand routing protocols is that it is beacon-less and hence does not require periodic hello packet (beacon) transmissions, which are used by a node to inform its neighbors of its presence. The basic approach of this protocol (and all other on-demand routing protocols) during the route construction phase is to establish a route by flooding RouteRequest packets in the network. The destination node, on receiving a RouteRequest packet, responds by sending a RouteReply packet back to the source, which carries the route traversed by the RouteRequest packet received.

The advantages are: This protocol uses a reactive approach which eliminates the need to periodically flood the network with table update messages which are required in a table-driven approach. In a reactive (on-demand) approach such as this, a route is established only when it is required and hence the need to find routes to all other nodes in the network as required by the table-driven approach is eliminated. The intermediate nodes also utilize the route cache information efficiently to reduce the control overhead. The disadvantages are: The disadvantage of this protocol is that the route maintenance mechanism does not locally repair a broken link. Stale route cache information could also result in inconsistencies during the route reconstruction phase. The connection setup delay is higher than in table-driven protocols. Even though the protocol performs well in static and low-mobility environments, the performance degrades rapidly with increasing mobility. Also, considerable routing overhead is involved due to the source-routing mechanism employed in DSR. This routing overhead is directly proportional to the path length.

In computing, traceroute and tracert are computer network diagnostic commands for displaying possible routes (paths) and measuring transit delays of packets across an Internet Protocol (IP) network. The history of the route is recorded as the round-trip times of the packets received from each successive host in the route (path); the sum of the mean times in each hop is a measure of the total time spent to establish the connection. Traceroute proceeds unless all sent packets are lost more than twice; then the connection is lost and the route cannot be evaluated. Ping, on the other hand, only computes the final round-trip times from the destination point.

The Address Resolution Protocol (ARP) is a communication protocol used for discovering the link layer address, such as a MAC address, associated with a given internet layer address, typically an IPv4 address. This mapping is a critical function in the Internet protocol suite. ARP was defined in 1982 by RFC 826, which is Internet Standard STD 37.

DSRFLOW, the Flow-State extensions to Dynamic Source Routing (DSR), are a set of extensions that provide all of the benefits of source routing, without most of the per-packet overhead that is associated with source routing. It works by allowing most packets to be sent without a source route header, thus substantially reducing overhead. Indeed, one of the disadvantages of DSR was that the longer the source route of the packet was, the bigger the packet header became. The technique used is called implicit source routing. Flow state extensions to DSR were first described in "Implicit Source Routes for On-Demand Ad Hoc Network Routing" by Yih-Chun Hu and David B. Johnson (2001). 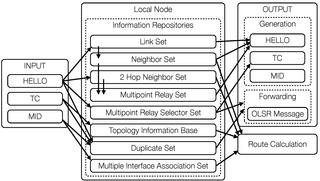 Zone Routing Protocol, or ZRP is a hybrid Wireless Networking routing protocol that uses both proactive and reactive routing protocols when sending information over the network. ZRP was designed to speed up delivery and reduce processing overhead by selecting the most efficient type of protocol to use throughout the route.

The OrderOne MANET Routing Protocol is an algorithm for computers communicating by digital radio in a mesh network to find each other, and send messages to each other along a reasonably efficient path. It was designed for, and promoted as working with wireless mesh networks.

A wireless ad hoc network (WANET) or mobile ad hoc network (MANET) is a decentralized type of wireless network. The network is ad hoc because it does not rely on a pre-existing infrastructure, such as routers in wired networks or access points in managed (infrastructure) wireless networks. Instead, each node participates in routing by forwarding data for other nodes, so the determination of which nodes forward data is made dynamically on the basis of network connectivity and the routing algorithm in use.

The Better Approach to Mobile Ad-hoc Networking (B.A.T.M.A.N.) is a routing protocol for multi-hop mobile ad hoc networks which is under development by the German "Freifunk" community and intended to replace the Optimized Link State Routing Protocol (OLSR).

Routing in delay-tolerant networking concerns itself with the ability to transport, or route, data from a source to a destination, which is a fundamental ability all communication networks must have. Delay- and disruption-tolerant networks (DTNs) are characterized by their lack of connectivity, resulting in a lack of instantaneous end-to-end paths. In these challenging environments, popular ad hoc routing protocols such as AODV and DSR fail to establish routes. This is due to these protocols trying to first establish a complete route and then, after the route has been established, forward the actual data. However, when instantaneous end-to-end paths are difficult or impossible to establish, routing protocols must take to a "store and forward" approach, where data is incrementally moved and stored throughout the network in hopes that it will eventually reach its destination. A common technique used to maximize the probability of a message being successfully transferred is to replicate many copies of the message in hopes that one will succeed in reaching its destination.

Vehicular Reactive Routing protocol (VRR) is a reactive routing protocol with geographical features which is specifically designed for Wireless Access for the Vehicular Environment (WAVE) standard in Vehicular ad hoc Networks (VANETs). The protocol takes advantages of the multichannel scheme defined in WAVE and uses the Control Channel (CCH) for signalling, and relies on one of the multiple Service Channels (SCHs) for payload data dissemination.

Scalable Source Routing (SSR) is a routing protocol for unstructured networks such as mobile ad hoc networks, mesh networks, or sensor networks. It combines source routing with routing along a virtual ring, and is based on the idea of "pushing Chord into the underlay".

Fisheye State Routing (FSR) is a proposal for an implicit hierarchical routing protocol targeted to ad hoc networks. The basic principles of FSR are shared with other proactive, link-state routing protocols. In proactive link-state protocols every network node constantly updates a topology map that makes it possible to compute the shortest path to any destination in the network. The originality of FSR is inspired by the "fisheye" technique to reduce the size of information required to represent graphical data: The eye of a fish captures with high detail the pixels near the focal point, while the detail decreases as the distance from the focal point increases.

It was first described in: