A fat-tailed distribution is a probability distribution that exhibits a large skewness or kurtosis, relative to that of either a normal distribution or an exponential distribution. In common usage, the terms fat-tailed and heavy-tailed are sometimes synonymous; fat-tailed is sometimes also defined as a subset of heavy-tailed. Different research communities favor one or the other largely for historical reasons, and may have differences in the precise definition of either.

The extreme case: a power-law distribution

The most extreme case of a fat tail is given by a distribution whose tail decays like a power law.

That is, if the complementary cumulative distribution of a random variable X can be expressed as[ citation needed ]

then the distribution is said to have a fat tail if

is small. For instance, if

, the variance and the skewness of the tail is mathematically undefined (a special property of the power-law distribution), and hence larger than any normal or exponential distribution. For values of

, the claim of a fat tail is more ambiguous, because in this parameter range, the variance, skewness, and kurtosis can be finite, depending on the precise value of

, and thus potentially smaller than a high-variance normal or exponential tail. This ambiguity often leads to disagreements about precisely what is or is not a fat-tailed distribution. For

moment is infinite, so for every power law distribution, some moments are undefined.[ citation needed ]

" refers to the asymptotic equivalence of functions, meaning that their ratio tends to a constant. In other words, asymptotically, the tail of the distribution decays like a power law.[ citation needed ]

The Black–Scholes model of option pricing is based on a normal distribution. If the distribution is actually a fat-tailed one, then the model will under-price options that are far out of the money, since a 5- or 7-sigma event is much more likely than the normal distribution would predict. [5]

In finance, fat tails often occur but are considered undesirable because of the additional risk they imply. For example, an investment strategy may have an expected return, after one year, that is five times its standard deviation. Assuming a normal distribution, the likelihood of its failure (negative return) is less than one in a million; in practice, it may be higher. Normal distributions that emerge in finance generally do so because the factors influencing an asset's value or price are mathematically "well-behaved", and the central limit theorem provides for such a distribution. However, traumatic "real-world" events (such as an oil shock, a large corporate bankruptcy, or an abrupt change in a political situation) are usually not mathematically well-behaved.

In marketing, the familiar 80-20 rule frequently found (e.g. "20% of customers account for 80% of the revenue") is a manifestation of a fat tail distribution underlying the data. [7]

The "fat tails" are also observed in commodity markets or in the record industry, especially in phonographic market. The probability density function for logarithm of weekly record sales changes is highly leptokurtic and characterized by a narrower and larger maximum, and by a fatter tail than in the Gaussian case. On the other hand, this distribution has only one fat tail associated with an increase in sales due to promotion of the new records that enter the charts. [8]

In The Fat Tail: The Power of Political Knowledge for Strategic Investing , political scientists Ian Bremmer and Preston Keat propose to apply the fat tail concept to geopolitics. As William Safire notes in his etymology of the term, [9] a fat tail occurs when there is an unexpectedly thick end or “tail” toward the edges of a distribution curve, indicating an irregularly high likelihood of catastrophic events. This represents the risks of a particular event occurring that are so unlikely to happen and difficult to predict that many choose to ignore their possibility. 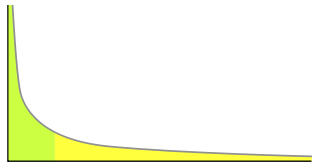 In statistics, a power law is a functional relationship between two quantities, where a relative change in one quantity results in a proportional relative change in the other quantity, independent of the initial size of those quantities: one quantity varies as a power of another. For instance, considering the area of a square in terms of the length of its side, if the length is doubled, the area is multiplied by a factor of four.

The Black–Scholes or Black–Scholes–Merton model is a mathematical model for the dynamics of a financial market containing derivative investment instruments. From the partial differential equation in the model, known as the Black–Scholes equation, one can deduce the Black–Scholes formula, which gives a theoretical estimate of the price of European-style options and shows that the option has a unique price given the risk of the security and its expected return. The equation and model are named after economists Fischer Black and Myron Scholes; Robert C. Merton, who first wrote an academic paper on the subject, is sometimes also credited. 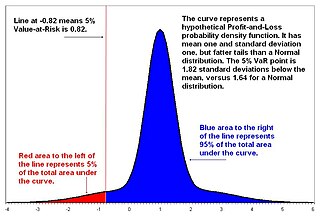 Value at risk (VaR) is a measure of the risk of loss for investments. It estimates how much a set of investments might lose, given normal market conditions, in a set time period such as a day. VaR is typically used by firms and regulators in the financial industry to gauge the amount of assets needed to cover possible losses. 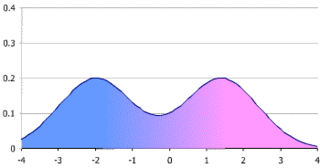 In statistics and decision theory, kurtosis risk is the risk that results when a statistical model assumes the normal distribution, but is applied to observations that have a tendency to occasionally be much farther from the average than is expected for a normal distribution.

Skewness risk in financial modeling is the risk that results when observations are not spread symmetrically around an average value, but instead have a skewed distribution. As a result, the mean and the median can be different. Skewness risk can arise in any quantitative model that assumes a symmetric distribution but is applied to skewed data. 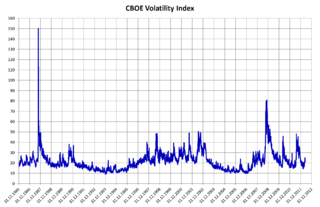 In finance, volatility is the degree of variation of a trading price series over time, usually measured by the standard deviation of logarithmic returns. 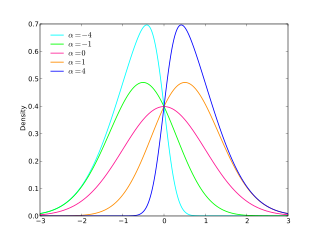 Financial models with long-tailed distributions and volatility clustering have been introduced to overcome problems with the realism of classical financial models. These classical models of financial time series typically assume homoskedasticity and normality cannot explain stylized phenomena such as skewness, heavy tails, and volatility clustering of the empirical asset returns in finance. In 1963, Benoit Mandelbrot first used the stable distribution to model the empirical distributions which have the skewness and heavy-tail property. Since -stable distributions have infinite -th moments for all , the tempered stable processes have been proposed for overcoming this limitation of the stable distribution.