Fatima Yusuf-Olukoju (born 2 May 1971 in Owo, Ondo) is a retired Nigerian athlete, who competed mainly in the 400 metres during her career. She won 400 metres race in the 1991 All-Africa Games and was second in the 200 metres race. She is married to Adewale Olukoju.

She later competed in the 200 meters at the World Championship in Spain where she ran 22.28. She is also the first African woman to run under 50 secs in the 400 meters. She ran 49.43 at the 1995 African Championship

She competed for Nigeria in the 1996 Summer Olympics held in Atlanta, United States in the 400 meters in which she placed 6th with the time of 49.77 and 4 x 400 metres where she won the Silver medal with her teammates Bisi Afolabi, Charity Opara and Falilat Ogunkoya behind host nation America. She attended Azusa Pacific University.

Novlene Hilaire Williams-Mills, is a retired Jamaican track and field athlete. She won the bronze medal in the 400 metres at the 2007 World Championships. She is also a three-time Olympic silver medallist in the 4×400 metres relay.

Bärbel Wöckel is a retired East German sprinter. She never ran a world record in the individual disciplines. However, she ran several world records in the team with Doris Maletzki, Renate Stecher and Christina Heinich over 4 x 100 meters, the last time on September 8, 1974 in Rome. At the GDR Championships she took first place in the 4 x 100 meter relay in 1974, 1977, 1978, 1981 to 1984. In 1976 she won third place with the team. During this time she was in the state-organized doping program.

Clement Chukwu is a former Nigerian athlete who specialized in the 200 and 400 metres.

Adewale Olukoju is a Nigerian athlete who competed in discus throw and shot put. He was very prominent in African athletics in the late 1980s and early 1990s, winning four gold medals in total at the All-Africa Games.

Diane Lynn Dixon is an American athlete who competed mainly in the 400 metres. She was born in Brooklyn, New York. She has an Olympic gold medal for running with the American 4x400 meters relay team at the 1984 Olympics, running in the preliminary rounds.

Airat Bakare is a retired Nigerian female sprinter who specialized in the 400 metres event.

These are the official results of the Women's 4 × 400 m Relay event at the 1996 Summer Olympics in Atlanta, Georgia. There were 15 nations competing. 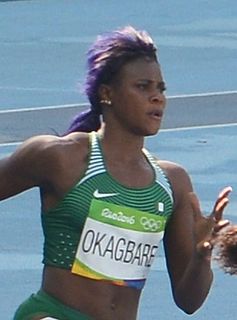 Blessing Okagbare-Otegheri is a Nigerian track and field athlete who specializes in long jumping and short sprints. She is an Olympic and World Championships medalist in the long jump, and a world medalist in the 200 metres. She also holds the Women's 100 metres Commonwealth Games record for the fastest time at 10.85 seconds.

Francena Lynette McCorory is an American track and field athlete, known primarily for running the 400 metres, and is the NCAA and American indoor record holder in that event. She was a member of the 2012 United States Olympic team and won the gold medal in the 4 × 400 m relay at the 2012 Summer Olympics in London. She was the IAAF 400 meter Indoor World Champion in 2014.

Regina George is an American-born Nigerian sprinter who specializes in the 400 metres. She represented Nigeria at the 2012 Summer Olympics and was the silver medallist at the African Championships in 2012. 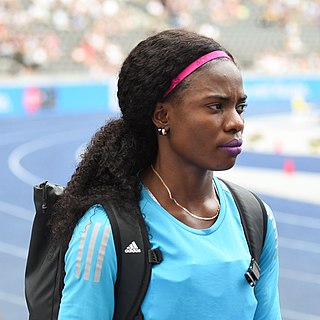 Oluwatobiloba Ayomide "Tobi" Amusan is a Nigerian track and field athlete who specialises in the 100 metres hurdles and also competes as a sprinter. She Won the 2018 Commonwealth and 2019 African champion in the event. She is also a two-time African Games champion.

Salwa Eid Naser is a Nigerian-born Bahraini athlete sprinter who specializes in the 400 metres. She is the 2019, youngest-ever World champion with a best of 48.14 sec, thus becoming first Asian woman to win the event at the World Championships. It ranks her third on the all-time list, behind only Marita Koch and Jarmila Kratochvílová. At the distance, she is also the 2017 World silver medalist.